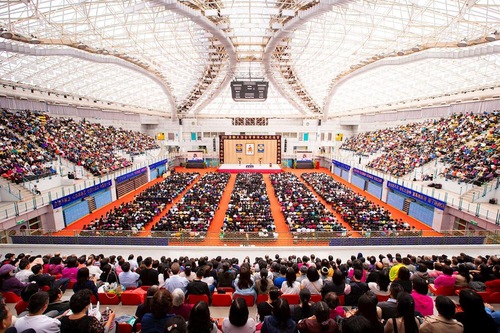 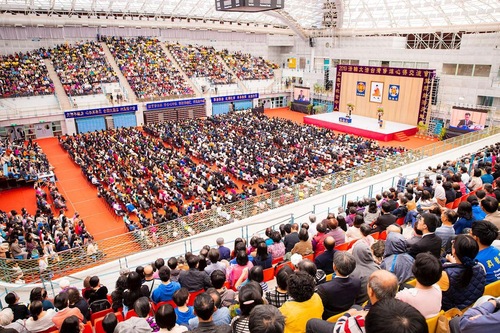 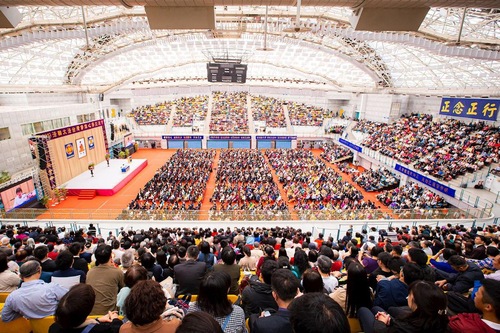 Twenty practitioners read their experience sharing papers at the conference, discussing how they have improved their health and moral standards by following Falun Dafa’s principles of Truthfulness-Compassion-Forbearance. Many of them spoke about their efforts to tell people about Falun Dafa and the Chinese Communist Party's (CCP) persecution.

Studying and Memorizing the Teachings

Ms. Pan from Taipei used to have difficulty concentrating when she studied the Falun Dafa teachings, so she tried to memorize Zhuan Falun, in addition to her allocated time for reading. She memorized the Fa when she was out walking or waiting for public transportation.

“Memorizing the Fa is also a process of purifying my thoughts,” she explained. As a practitioner, she pays attention to letting go of attachments to fame, material interests, and sentimentality. She said she sensed significant improvements in her cultivation after she began to memorize the Fa. 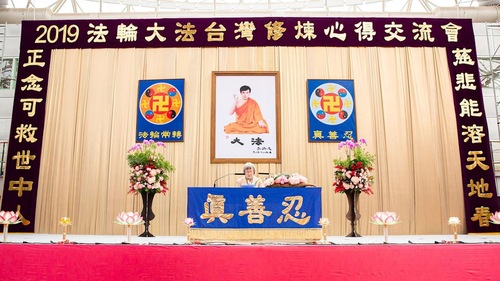 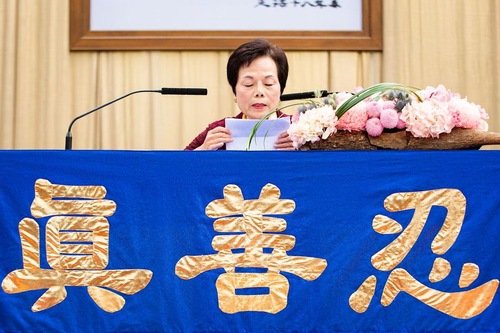 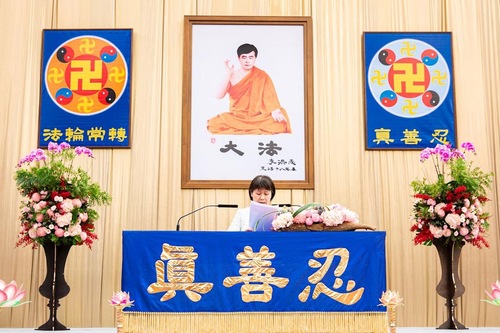 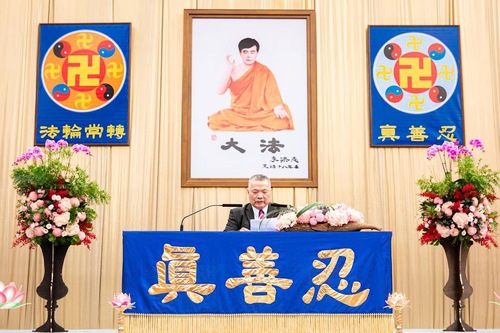 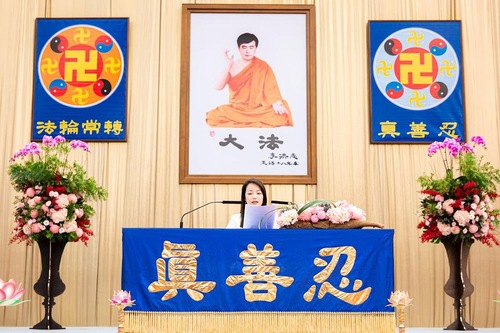 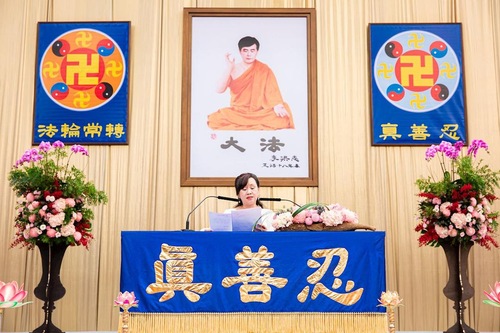 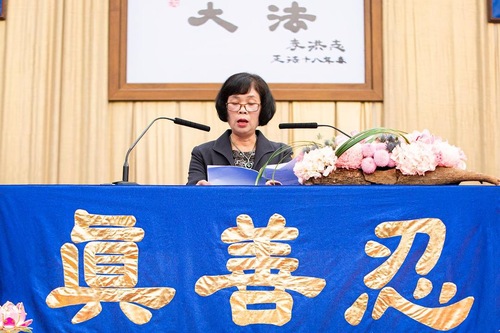 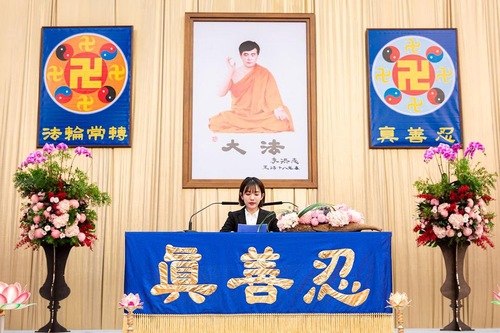 Ms. Liao, 70, began to practice Falun Dafa two years ago. For a long time, she had suffered from various illnesses and had symptoms such as frequent urination, feeling cold in her four limbs, and chronic fatigue. She had tried dietary supplements and medical devices, but they were of little help. After becoming a practitioner, however, all of her symptoms disappeared before she had time to realize it. “If I had not practiced Falun Dafa, I would still be laying in bed in pain,” she said.

To help residents and tourists in Hong Kong learn the real story of Falun Dafa, Ms. Liao often travels there to distribute flyers or participate in large-scale parades. “I have occasionally experienced physical discomfort or encountered people who are hostile toward Dafa, but I consider all of these things opportunities to improve my xinxing,” she said. After a recent trip to Hong Kong, her eyesight improved dramatically and several vision problems—nearsightedness, farsightedness, and color blindness—were all gone. Her loose teeth also became firm. Witnessing these miracles, her family members are now very supportive of her practice.

Remaining Humble and Looking Within

Ms. Tian is a coordinator for Shen Yun Performing Arts promotion in Hsinchu. She takes this project very seriously and often made very direct remarks to practitioners she worked with, which made some of them resistant to working with her. “When I first heard about this, I could not take it and wondered how come the barrier between us was so huge,” she said. “I later looked inward and in my heart I told Master Li Hongzhi (the founder of Falun Dafa): ‘I will look inward unconditionally to improve myself.'” With that thought and my improvement, the other practitioners also changed and, as the conflicts resolved, they provided many constructive suggestions and supported her with righteous thoughts.

Once when she was recommending Shen Yun to her family and relatives, they gave her some feedback about herself and suggested that she “listen more and remain humble.” Thinking it over, she realized that her attachments to competitiveness and looking down on others had caused this situation to manifest. “I also came to understand that every person may come to this world from a high level. I have to be humble and really understand them in order to fulfill the mission of awakening sentient beings.”

Learning to Practice in Prison

Mr. Guo was once a professional gambler and a drug addict. After he was sentenced to 10 years in prison, he fell into despair and lost all hope. About a year before his release, he saw a copy of the book Zhuan Falun in the prison and began to read it out of curiosity. “That changed my life entirely,” Mr. Guo recalled. “After reading it three times, my mind cleared and I could feel a Falun (law wheel) rotating inside me. That night, I had a dream in which I descended one layer after another, until I reached this world.”

Mr. Guo memorized all of Zhuan Falun while he was in prison and read all of the other lectures by Master Li, about 10 times. Many inmates followed him and began to practice. On the day he was released, he felt it was a major turning point in his life, as if he was reborn.

With a solid foundation from Fa-study, Mr. Guo was able to do well during conflicts and tests, as well as guard his own thoughts. He goes to tourist sites to tell people about Falun Dafa and has also participated in Shen Yun promotion. “I could truly feel the transformation of my physical body and I am so grateful to Master Li,” he said.

Ms. Su has been working for the Epoch Times media group for many years. As a Dafa practitioner, she has realized the importance of letting go of selfishness and negating the old forces' arrangements. “When we run into conflicts, the more fear we have of losing, the worse our condition will become,” she said. “When we face illness karma or other tribulations, if we first think of awakening sentient beings instead of our own pain or difficulty, we will see how the problem can be resolved.”

One of her family members fell ill at the same time as she was having problems at work and dealing with an illness karma test herself. Despite all this happening at the same time, Ms. Su continued to study the Fa and send forth strong righteous thoughts to negate the old forces' interference. “Not long after that, all these problems went away, as if nothing had happened. From this I witnessed how compassionate and great Master Li is,” she continued.

Through reading the Epoch Times editorial series The Ultimate Mission of Communism recently, Ms. Su had a deeper understanding of jealousy. “More specifically, I found that I need to let go of complaining and fostering resentment,” she said.

Awakening People and Validating the Fa

Ms. Tian works in marketing for New Tang Dynasty Television (NTD). Once when she was attempting to contact a client, the client did not answer the phone and ignored several of her voicemails. She thought of herself as a Dafa practitioner and at the same time realized that Dafa is both compassionate and solemn. “I must help this person understand the truth about Dafa and this contract will work out,” she thought. During their next meeting, she explained to the client why NTD was established, its mission, and the suppression of Falun Dafa in China. The client later signed several contracts that amounted to millions of New Taiwanese dollars and thanked Ms. Tian for her persistence.

She also came to understand “cultivating myself well is also validating the Fa,” so she strives to be selfless and compassionate when interacting with clients. Touched by her sincerity, many of the people she has come into contact with have started to practice Falun Dafa.

After an illness tribulation, Ms. Tian overcame the notion of sleeping longer each day and only slept two or three hours before going out to do the exercises in the morning. Her health improved dramatically and many clients she had failed to meet with in the past now returned her phone calls to discuss signing contracts. This helped her further realize the magnificence of Dafa.

Ms. Kang from Kaohsiung said her entire family has benefited from Falun Dafa. “After attending the nine-day video lectures, I was like a new person and all my illnesses were gone. My daughter, who had always suffered from her menstrual periods, regained her health after becoming a practitioner and no longer needs any dietary supplements. My father, who is 94, used to smoke two packs of cigarettes every day and his lungs were barely functioning. After listening to Master’s audio lectures, he quit smoking– an 80-year habit! Not only that, he removed 500 packs of cigarettes he had hidden all over the house. The power of Dafa really impressed our entire family.”

To help more people learn about the practice, Ms. Kang goes to tourist sites on a regular basis. She initially started learning how to talk to the tourists by reading materials, watching other practitioners, and simply saying, “Falun Dafa is good.” Later on, she was able to help hundreds of Chinese people quit the Chinese Communist Party (CCP) and its affiliated organizations so they would have a better future.

Ms. Zhang Weichun started to practice Falun Dafa with her mother when she was a child. After entering high school, however, she hung around with her friends and slacked off in cultivation. This worsened when she began to work. Influenced by attachments to fame and material interests, the competitive mentality, and other human notions, she became lost and nearly faced criminal charges.

Eventually, Ms. Zhang decided to return to practicing Falun Dafa. After she opened Zhuan Falun and read it again, she felt very remorseful for wasting so many years. She decided to let go of her attachments to fame and fortune, and become a better person. Furthermore, she was determined to treat the things she encountered as opportunities to improve her character. She hopes to look within, remain steadfast in cultivation, and once again become a diligent practitioner.

Practitioners who attended said they learned a lot from the event and felt encouraged to be more diligent in cultivation and fulfill their vows of awakening people and validating the Fa.