(Minghui.org) Today's news from China includes incidents of persecution that took place in 13 cities or counties in 8provinces, where at least 42 practitioners were recently persecuted for their belief. 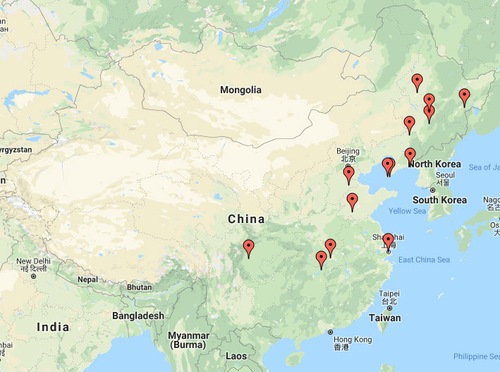 Mr. Liu Fanrong from Dehui City was arrested by officer Zhang Zicheng and others from Jianshejie Police Station on the evening of October 23, 2019. He was detained for ten days.

Ms. Han Xiaozhen was arrested at home on the afternoon of October 31, 2019.

Ms. Shen Hongyan was arrested at home by officers from Zhengyang Police Station on the evening of November 2. She was detained for five days.

Mr. Du Ting was formally placed under arrest on October 30, 2019. He is on a hunger strike in Shanghai Prison Hospital.

Mr. Sun Jinkui, Ms. Wang Yali, and Ms. Wang Shugui were arrested on November 9, 2018, and detained. The Mishan City Procuratorate brought charges against them on July 17, 2019. They are due to be tried in Mishan Court on November 5.

Mr. Liu Enquan was sentenced to a four-year prison term by the Ranghulu District Court on June 6, 2019. He was secretly taken to Hulan Prison in late September.

Ms. Song was taken to Dalian City Detention Center, even though she was unable to walk. She was taken to three hospitals, and all concluded that she was severely ill. Ms. Song was released the next day.

Ms. Qu and Ms. Wu were detained for ten days in the Dalian Rehab Center.

Ms. Sun and Ms. Zhou were taken to Dalian Detention Center. Ms. Zhou started a hunger strike and was taken to the emergency room when she was in critical condition. She was released and is now under house arrest.

Nine practitioners were arrested in Ms. Li Ping’s home by officers from Kaifaqu Police Station on the afternoon of November 1, 2019, when they were studying the Falun Dafa teachings together. The police ransacked the place and confiscated their personal belongings.

All of the practitioners were taken to the police station for interrogation. Eight of them were released later that night. Ms. Li was detained for 15 days and fined 300 yuan.

Mr. Jin Liguo and his wife Ms. Liu Yuhua were arrested on October 9, 2019. Ms. Liu has been formally placed under arrest.

Ms. Sun Yaping from Botou City was arrested by officers from Zhejiang Province. She was taken to Lishui City in Zhejiang.

Ms. Cheng Shouying and her husband Mr. Wang Baocheng from Jigou Village, Taiping Town, were arrested by officers from Taiping Police Station and staff from the Security Division of Nantun Coal Mine on the afternoon of October 29, 2019, for talking to people about the persecution of Falun Gong. Their home was ransacked, and computers and other personal belongings were confiscated.

Mr. Zhang Jian from Yueyang City was arrested in Lengshuipu, Yuyang, by officers from Jiangxi Province in mid-October 2019, when he was seen on a surveillance camera handing out Falun Gong fliers in a park. He was detained for ten days.

Mr. Hu Shengli from the Junshan District was held by police for nine hours in mid-October.

Ms. Huang Xiuqing, 79, was arrested by officers from Jiebei Police Station on September 18, 2019, for posting Falun Gong informational materials. She was subjected to five days probation.

“Seeing Through the CCP's Doctrine of “Hatred” and “Struggle””