(Minghui.org) The 147th Annual Meeting and Expo of the American Public Health Association (APHA) was held at the Pennsylvania Conference Center in Philadelphia, November 2 - 6, 2019.

During the gathering of 12,000 of the world's most influential public health professionals, many learned about the Chinese communist regime's large-scale extrajudicial killing of prisoners of conscience and religious adherents for organ transplants. 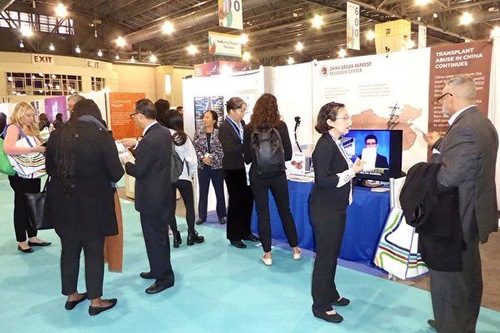 Founded in 1872, APHA is the world's oldest and most academically diverse public health organization. The 2019 meeting and expo was attended by representatives from governments, universities, research institutes, organizations, hospitals, and health care providers from around the world. There were also a large number of attendees from China and those studying abroad.

New York-based China Organ Harvest Research Center (COHRC) participated in the meeting for the third time with oral and poster presentations. COHRC revealed one of the most hideous human rights disasters of the 21st century, which alarmed participants.

Unlike black market organ trafficking in some countries, the Chinese Communist Party's (CCP) on-demand forced live organ transplants from prisoners of conscience are state-sanctioned and operated by the military and local institutions.

The COHRC exposed the CCP's live organ harvesting during the 27th International Congress of Transplant Society (TTS) in Spain in July 2018, the American Transplant Congress (ATC) in June 2019, and the 19th Congress of the European Society of Organ Transplant in Denmark in September 2019. At the end of October, the COHRC was invited to the annual meeting of the American Society of Bioethics and Humanity (ASBH). The COHRC shared its latest research results with special presentations on the nature, scale, organ source, driving factors, and impact of China's forced organ harvesting. 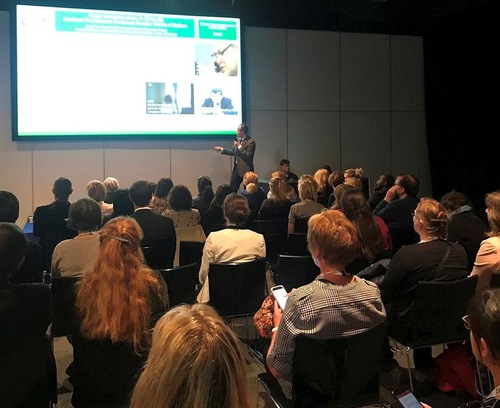 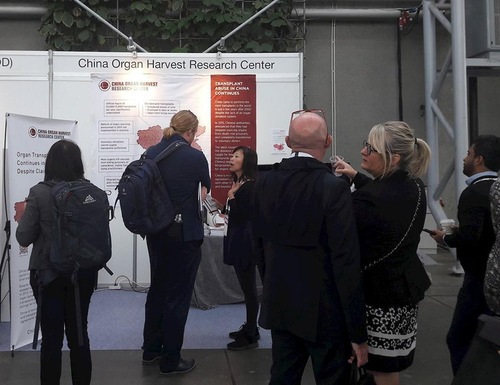 The CCP's state-sanctioned live organ harvesting drew attention during the 19th Congress of the European Society of Organ Transplant in Denmark in September 2019.

The COHRC conducted a systematic study of the Chinese Organ Transplantation and Citizen Donation System and issued the 2019 new report during the Second US Ministerial Summit on Religious Freedom in Washington, DC in July this year.

Based on the nature, scale and severity of China's forced live organ harvesting, the COHRC revealed how China's organ transplant industry quickly expanded alongside the CCP's persecution of Falun Gong. The persecution meets all elements of genocide and crimes against humanity as set out by international law.

The research shows that the CCP used prisoners on a small-scale in the 1970s. Since 2001, organ transplants have been listed as a national development strategy, but with no national organ donation system in place. Also, the number of executions has been declining year by year.

By 2007, more than 1,000 military and local hospitals in China were involved in organ transplants. According to the Ministry of Health's minimum bed qualification requirements for transplant hospitals, the minimum annual capacity of only 165 approved hospitals is 70,000 transplants, far exceeding the government's declared 10,000 annual transplants.

Under pressure from the international community, the CCP announced that it completely banned the use of death row prisoners for organ transplant in 2015 and turned to voluntary donations from citizens. However, the COHRC study shows that by the end of 2017, China’s 373,000 registered organ donors can produce 12 actual donations based on the proportion of U.S. registered organ donors and actual donations. The sum of published donors (mainly from intensive care units in hospitals) from each province does not even meet the number of official transplants which were greatly understated.

However, China's organ transplant tourism, international academic and commercial cooperation extend through the organ sharing agreement to other parts of Asia and beyond via the so-called “Belt and Road”. This makes forced organ transplants a global crime.

The latest COHRC report reveals that behind this huge profiteering industry is an extra-judicial killing system driven by the Chinese Communist regime and involving the military and local institutions. The victims are mainly Falun Gong practitioners, as well as Uighurs, Tibetans, underground church members, dissidents and other vulnerable groups.

The report pointed out, “Falun Gong is neither the first nor the last group to be persecuted by the Chinese communist regime, but it is the only group that has been openly targeted for eradication.

“Ample evidence has been accumulated to allow for a detailed study with respect to the development, methods, and outcomes of the persecution. The scale, sophistication, cruelty and longevity of the campaign against Falun Gong make it one of the most hideous human rights disasters of the 21st century.”

The US Congress and the European Parliament have passed resolutions condemning the CCP for the forced organ harvesting from prisoners of conscience. Israel, Spain, Italy, Taiwan, Norway and Belgium have also enacted legislation prohibiting citizens from organ transplant tourism to China.

In June 2019, the China Tribunal in London announced its final verdict: “Forced organ harvesting has been committed for years throughout China on a significant scale and that Falun Gong practitioners have been one – and probably the main – source of organ supply.”

Working Together to Stop the Atrocities

Several experts and scholars from various fields were shocked to learn the details of the 20-year genocide in China. They left their contact information to obtain more information. Some said they would incorporate the information into their curriculum, or participate in research and study. Others said they would encourage government legislators to stop the killing.

A man who is the vice president of an international medical and service non-profit organization, and the director and chief investigator of a US National Training Center, went to the COHRC booth and said that he had read the information the night before. He said that he informed all the people he knew about the issue. He solemnly said, “We will soon let all the people in the United States know.”

Professor Bibeau of the Department of Public Health at the University of North Carolina is preparing to offer a course in ethics. He thanked COHRC for providing detailed materials, “These research results are very timely and exactly what I need. This will become an important part of the course.”

A doctor from Chicago came to the COHRC booth and thanked the staff. She received the COHRC information folder the day before, and read the summaries of the 2019 new report and the 2018 report that evening.

She said that she wanted to send the information to her sister who is an organ transplant doctor in New York. They had heard of the forced live organ harvesting before but they had difficulty believing it. She said she had great respect for Falun Gong practitioners.