(Minghui.org) Falun Dafa practitioners from Japan raised awareness of the persecution during the Daidogei World Cup in Shizuoka held November 1-4, 2019.They set up large banners at the entrance of Sunpu Castle Park, and collected signatures to encourage lawsuits against Jiang Zemin, former head of the Chinese Communist Party (CCP) who initiated the 20-year-long persecution. Within 4 days more than 1,600 people signed the petition. 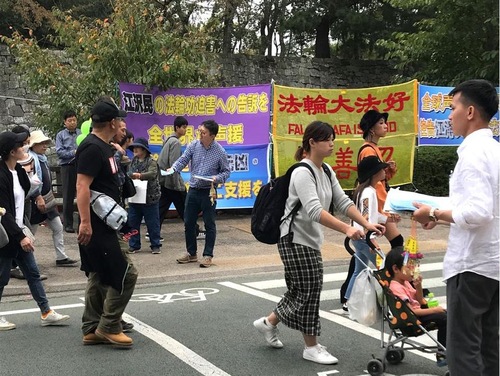 Practitioners' large banners at the entrance of Sunpu Castle Park attracted attention and several people stopped to ask for more information. They expressed outrage upon hearing the details of the persecution, especially the CCP's crimes of harvesting organs from living Falun Dafa practitioners. 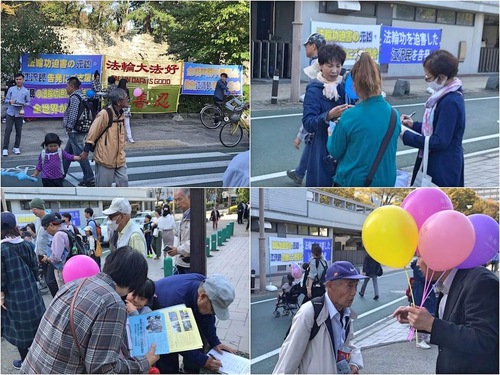 Many people signed the petition.

An elderly Japanese encouraged the practitioners and said, “What you are doing requires a lot of hard work, but it's so important to expose the nature of the Chinese Communist Party! Keep up the great work!”

After he signed the petition, a middle-aged man brought his children to signed as well. He said, “I heard about the CCP's organ harvesting a long time ago, but I didn't know how to help stop this barbarous crime. I'm glad you are collecting signatures here. I brought my children to sign as well. We hope this crime will be stopped immediately!”

A group of middle-school students signed the petition condemning organ harvesting, commenting, “Such a terrible thing is happening in this world!”, and, “Any human being would want to do something to stop it!”

A continuous stream of people came to sign the petition and express support for Falun Dafa.