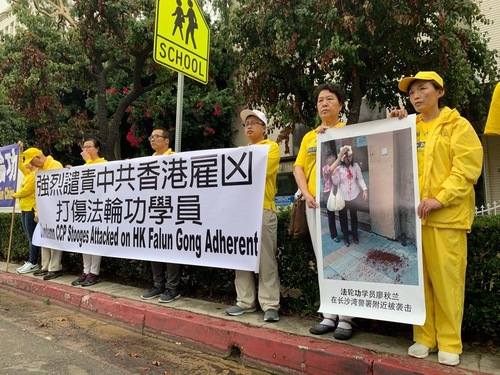 On the afternoon of September 24, Hong Kong practitioner Liao Qiulan and her friends applied for a permit at a police station to hold activities on October 1, the anniversary of China becoming communist. Large, official celebrations are held in China on October 1.

Shortly after they left the police station, two thugs dressed in black and wearing face masks attacked Ms. Liao with a baton used by the police. Her head was cut open and she was bleeding.

Yingnian Wu, spokesperson for the Los Angeles Falun Dafa Association, said, “We strongly condemn the CCP thugs who attacked Ms. Liao Qiulan in Hong Kong. It shows that the CCP is extending the persecution of Falun Dafa practitioners outside of mainland China.

“Falun Gong practitioners who clarify the truth to the public at scenic sites in Hong Kong are often harassed by members of the Youth Care Association. The attack on Ms. Liao is another example of that harassment.” 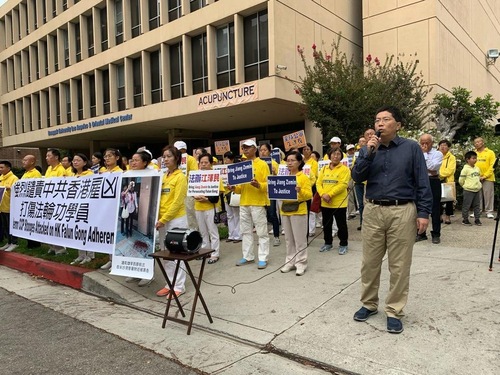 Wu called on the Hong Kong government to investigate the attack and bring the culprits to justice. 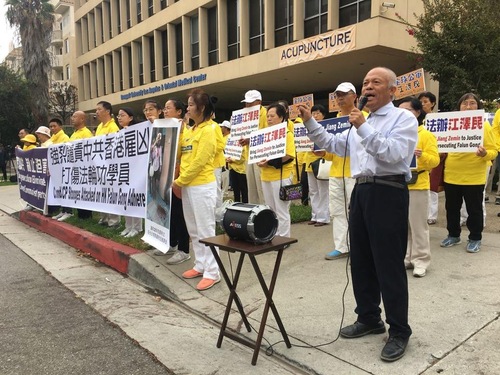 Yinquan Liu, Chairman of the Social Democratic Party of China

Yinquan Liu, Chairman of the Social Democratic Party of China, said at the rally, “The CCP’s brutal persecution of Falun Gong reveals just how evil the Party is. The CCP persecutes kind Chinese people.”

“I think the Hong Kong issue is an important turning point. The CCP has controlled China for 70 years. This is also a turning point for the CCP—from prosperity to its decline.

Liu predicted, “From now on, the CCP will go downhill step by step and finally fall apart. There is no way to reverse this trend.”