Hebei Woman Beaten and Arrested on the Street for Her Faith

(Minghui.org) A resident of Raoyang County, Hebei Province was arrested on August 28, 2019 at a local market for her faith in Falun Gong, a spiritual discipline that has been persecuted by the Chinese communist regime since 1999.

According to a witness, a group of officers beat Ms. Yang Zhongshen on the street, with one sitting on her.

Officers from the Tongyuexiang Police Station ransacked Ms. Yang's home and sent her to the Hengshui City Detention Center that evening, where she has been detained since.

More details about her case are being investigated.

Prior to her latest arrest, Ms. Yang was incarcerated three times in brainwashing centers, four times in detention centers, and two years in forced labor camps. Her home has also been ransacked three times.

Below is an account of Ms. Yang's ordeal over the past 20 years of persecution.

Taking Up the Practice

Ms. Yang's husband opened a barbershop in Raoyang County in 1994. When the persecution began in 1999, he was taken away by the police, resulting in the temporary shutdown of his shop.

Ms. Yang lived in the shop at that time. She was monitored around the clock. The shop was ransacked one week following her husband's arrest.

Ms. Yang went to Beijing to appeal for Falun Gong in October 1999. She was arrested and sent to a detention facility, where she was cuffed to a heating pipe for hours. Later that night, she was taken back to Raoyang County and held at the Raoyang Detention Center.

She endured multiple interrogations, verbal abuse, and being handcuffed and shackled to a chair for long hours. The police also threatened to parade her through the streets. Two weeks later, Ms. Yang was sent to a brainwashing center and held there for months. 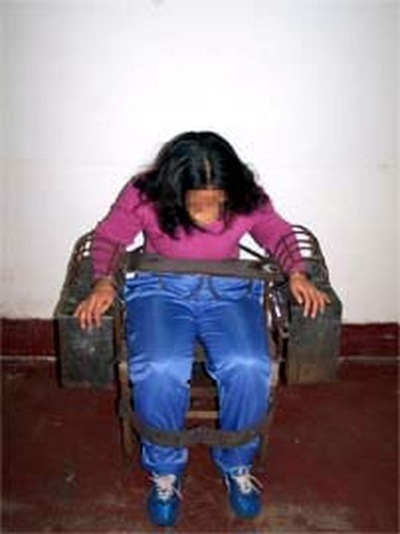 Torture Reenactment: Restrained on a Chair

In early winter of 2000, Ms. Yang and her husband were arrested again and sent to the Raoyang County Brainwashing Center. She was transferred to the Raoyang Detention Center one and a half months later and then to the Anping County Detention Center after she went on a hunger strike to protest the persecution. She was released one month later. Her parents were extorted for 10,000 yuan by the police.

Two days after her release, however, Ms. Yang was taken back into custody and held at a brainwashing center for two months. The arrests forced the couple to close their barber shop and caused her family tremendous financial loss.

In 2001, Ms. Yang wrote two letters to the party secretary of the county and chief of the police department, demanding that they return the 300,000 yuan extorted from local Falun Gong practitioners. In September, she was arrested while working at a private textile company.

At the Raoyang Detention Center, Ms. Yang was brutally beaten with a wooden plank. She went on a hunger strike to protest the abuse. When the prison guards were transferring her to the Detention Center the next day, she tried to break free from the handcuffs at the gate. She was punched and kicked, and some of her hair was pulled out.

Ms. Yang held a hunger strike again at the Wuqiang Detention Center. She was severely beaten, then handcuffed shackled in a position where she could not stand straight or sleep. The director of the detention center threatened to force feed her with urine and feces.

Six days later, Ms. Yang was sent back to the Raoyang Detention Center and was force fed. She was released 17 days later.

In December 2001, Ms. Yang and her husband were arrested when they were handing out Falun Gong informational materials. She managed to escape the detention and was forced into homelessness to avoid further arrest.

She was later put on the wanted list by the police after they found out she was planning to file a complaint against them.

Ms. Yang was constantly on the run and sometimes had to spend the nights in the wild or in corn fields in cold weather.

Ms. Yang's husband was later given three years of forced labor. He was held in a cage and left outside on a freezing winter night, causing him to develop frostbite in his legs and myelitis (inflammation of the spinal cord). He was released one year later on medical parole.

During the days that Ms. Yang was living away from home, the police frequently harassed and threatened her mother and her 5-year-old son.

Two days before the 2002 New Year, a group of officers scaled her mother's fence in the middle of the night and harassed the elderly woman, who was so terrified by this experience that she developed serious heart disease afterwards. Whenever she heard the sound of a motorcycle again, she would shake uncontrollably, afraid that the police were coming to arrest her daughter again.

In winter of 2002, Ms. Yang was arrested with three other displaced practitioners and taken to the Xushui County Police Department. She was brutally beaten for about 17 hours for her refusal to cooperate in the interrogation.

The officers placed her on two chairs and shocked her with a strong electricity current. She was in excruciating pain.

At the same time, the officers beat her on the knees and ankles, causing them to bruise and swell badly. Her toes were stomped and her toenails eventually fell off. Ms. Yang kept sweating profusely during the ordeal.

She went on a hunger strike to protest the torture and was later given a two-year term at Shijiazhuang Forced Labor Camp.

The injuries from the beatings are still visible on her ankles today.

Ms. Yang was frequently harassed after being released from the labor camp in 2004. The village party secretary once made a phone call to her, leaving her mother in a daze for two weeks.

The police tried to arrest Ms. Yang again in autumn 2008. She was doing odd jobs out of town at the time so she escaped arrest. The police then called her in-laws to harass them.

“A Kind Reminder to Cultivate Speech”