(Minghui.org) Falun Dafa practitioners from the Los Angeles metropolitan area formed a “Great Wall of Truth” along Valley Boulevard in San Gabriel on October 12, 2019, in support of the 340 million Chinese people who have quit the Communist Party and its affiliated organizations.

Ninety-one Chinese people made up their minds to also withdraw from the party and its affiliated organizations during the event in San Gabriel. 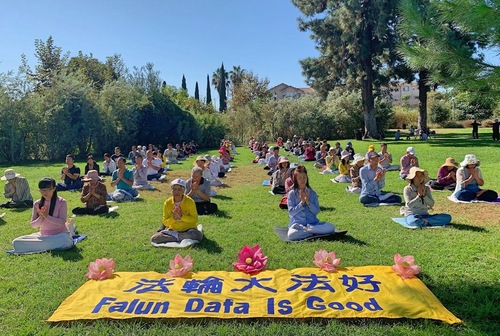 Practitioners at the event in San Gabriel, California 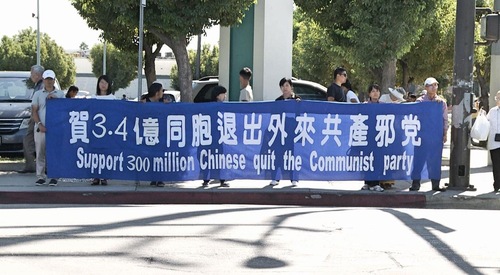 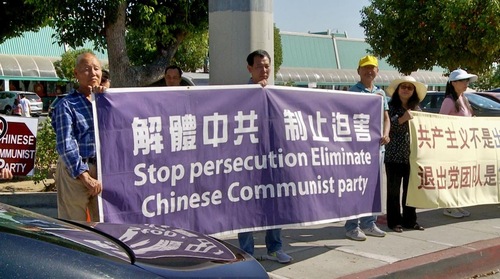 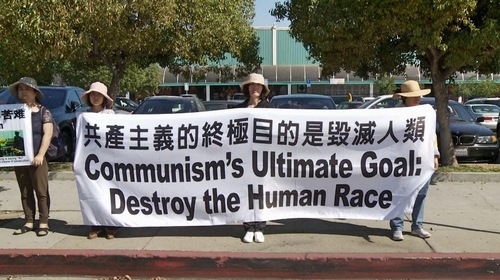 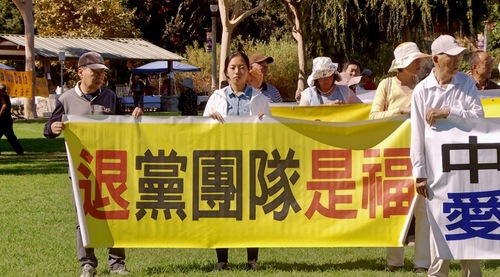 Xu, a tourist from Hong Kong, voiced his support for the millions of Chinese who have quit the Party. He also spoke of the recent violence against protestors in Hong Kong. “I am not against China, but I am against the Chinese Communist Party,” Xu said.

Two Chinese students who were driving by saw the practitioners' banners and decided to park their car so they could talk to a practitioner.

One of the students said she had heard of the persecution of Falun Gong in China, but she did not, until recently, believe that the Communist Party was capable of such terrible things. The crackdown against protestors in Hong Kong helped her see the regime’s brutality, as the authorities were shooting and brutally beating young people who were protesting in the streets. She said, “They [the Hong Kong students] didn’t do anything wrong. The police are so brutal.”

The other student said she had seen the practitioners’ banners about China’s forced organ harvesting crimes, and she was convinced that the evil Party was capable of anything.

Both students quit the Communist Youth League at the event. The Youth League is a youth organization affiliated with the Chinese Communist Party, that most children join while at school in China.

Helen Li, a Falun Dafa practitioner and the event organizer, said that more people have realized the evil nature of the Communist Party and have renounced their affiliations with it. She said people from mainland China used to keep their anger toward the Party to themselves, and didn’t dare speak out about their human rights, but people are becoming braver and are openly quitting the Party.

“After they quit the Party, people often tell our volunteers to add a comment in their announcement, ‘Down with the Communist Party!’” she said.

Ms. Sun, who immigrated to the United States two years ago, chose to quit the Young Pioneers during the event. She said that she was forced to join the organization when she was in elementary school. She also took a few printed materials from practitioners to share with her friends and family.

Helen Li said, “People who joined the Party or its affiliated organizations vowed to give their life to the Communist Party. When the party collapses, they will go down with the Party. We urge them to quit the Party as soon as possible so they can avoid disaster.”

“French Legislators: France Must Pledge Against the Forced Harvesting of Organs”