(Minghui.org) Falun Gong practitioners in Japan held activities during the popular Nagoya Festival held on October 19-20, 2019 in Sakae, the city's busy downtown district. The practitioners introduced the ancient spiritual and meditation practice and raised awareness of the Chinese Communist Party's (CCP) persecution of Falun Gong in China..Many visitors signed a petition to bring the perpetrators to justice. 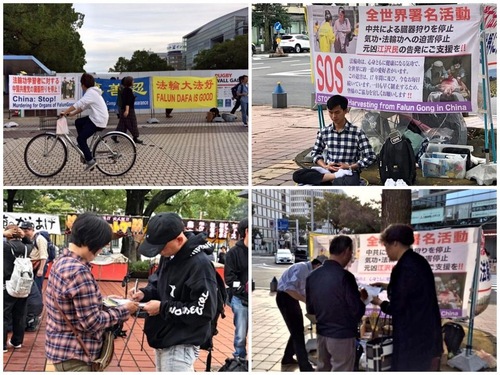 Despite the rainy forecast for Saturday, practitioners persisted in their event. It was cloudy but did not rain until they finished distributing all their flyers and wrapped up their activities in the late afternoon.

Crowds lined the streets to watch the Nagoya Festival parade on Sunday, October 20. They stopped by the practitioners' display on Otsu-Dori Boulevard and learned about Falun Gong and the persecution.

Many tourists from China also watched the parade and took photos of the practitioners' activities. Four young men encouraged practitioners, “Don't give up!”

“Practitioners in Northern Taiwan Study and Improve Together in Annual Gathering”