Practitioners in Northern Taiwan Study and Improve Together in Annual Gathering

(Minghui.org) Nearly 1,300 Falun Dafa practitioners from northern Taiwan gathered at the Chientan Youth Activity Center in Taipei on October 12-13 for an annual event, where they studied the Falun Dafa teachings and shared their self-cultivation experiences. The attendees hailed from Taipei City, New Taipei City, Taoyuan, Hsinchu, Miaoli, Yilan, and Hualien.

Practitioners divided themselves into smaller groups for five sessions of study and sharing. They covered the essentials of sending forth righteous thoughts and encouraged each other to do the three things asked of Dafa practitioners. During the second afternoon, everyone gathered in Qunyin Auditorium and Jixian Hall, where practitioners shared experiences from their personal cultivation and efforts to raise awareness of the persecution of Falun Dafa in China.

In a tradition established over the years, each practitioner memorizes and recites a small portion of Zhuan Falun after every Fa-study session. 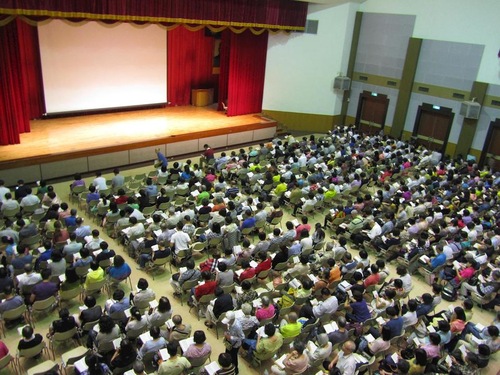 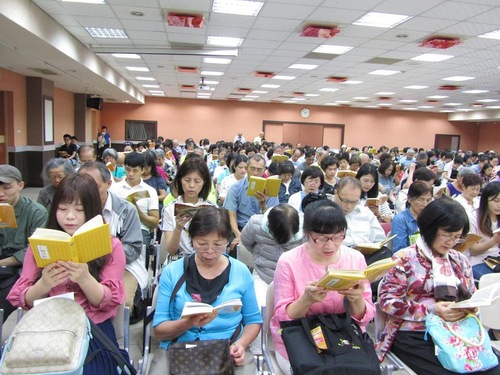 On the second day of the gathering, hundreds of practitioners did the Falun Dafa exercises together.

A 77-year-old practitioner from Miaoli named Ms. Zheng discussed the importance of participating in the large study group. When she first took up Falun Dafa, she was focused on raising her children and stopped cultivating for about 7-8 years. A practitioner encouraged Ms. Zheng to attend a group, where she met another practitioner with a young child. That practitioner shared that although she was busy taking care of her kids, she still persisted in joining the morning exercises and group study. Although she had less time to sleep, she was full of energy, felt refreshed, and led an enriching life.

Ms. Zheng said, “I felt really ashamed of myself. I started joining the group study and exercise sessions. I also go to tourist attractions to do the exercises and talk to people about Dafa. I try not to miss events anymore. My daughter and daughter-in-law are very supportive of what I am doing.”

Ms. Zheng said that she did not receive much education and did not have a good understanding of the Fa. After genuinely cultivating her xinxing (character, or mind nature), she understood the importance of telling others about Dafa, so she started to learn everything from scratch. Apart from going to tourist sites, she also writes letters and talks to people online.

Ms. Zheng has overcome many hardships in her journey. With tears in her eyes, she said, “Specific problems can be resolved when we use the Fa to look at them. Cultivation changed my fate. I am very happy and grateful to have the affinity to cultivate in Falun Dafa.”

Ms. Zhu from Taoyuanping County started practicing Falun Dafa in 2006. Over the years, she truly experienced the positive cultivation environment in Taiwan. However, this relaxed environment also makes it easy for one to become lax and lazy, she observed.

“When we practice the exercises outdoors, we will often need to tolerate mosquito bites. When the weather is cold in winter, fewer people join the morning practice. I also feel like skipping sometimes. Once, I saw a practitioner coming from afar with a Dafa banner in hand. The banner was shimmering with light, and I was really touched by that. After that, I no longer skipped morning exercises and will often encourage practitioners to get rid of laziness,” said Ms. Zhu.

Ms. Zhao from New Taipei City said that she also saw the dangers of pursuing comfort. She believes that the danger posed by the laziness that degrades her cultivation is as serious as the Chinese Communist Party’s (CCP) persecution of Dafa in mainland China. Therefore, Ms. Zhao keeps reminding herself to overcome her pursuit of comfort so as to avoid the dangers of deteriorating in her cultivation.

Taipei practitioner Bing Hua never had the chance to attend international experience-sharing conferences due to his family commitments. It was only last year that he was able to attend the conference in Washington, D.C. He did not expect that he would be designated as the main coordinator and leader for the Taipei group during the trip. He had to learn leadership skills from scratch.

There was an elderly practitioner who was critical of Bing. “How did you become the main coordinator?” she questioned. Bing smiled and later said of the encounter, “I understood from Fa study that no matter what good or bad things we meet with in our cultivation, they are all good things. I immediately managed to resolve the issue that she was asking about. Thanks to this elderly practitioner’s unforgiving words and persistence, I improved a lot. Although I was afraid of her nagging, I even gave her a lift to the airport.”

Another practitioner in the group was opinionated and criticized others harshly. He disagreed with the event rules and refused to follow them. Bing did not oppose him but just looked at his thoughts and opinions in a positive way and tried to find a way to resolve his issues. After working together for four days, this practitioner said to Bing, “You are the coordinator with the most serious attitude that I have ever met.” Bing replied, “This experience has allowed me to learn that we should not look at practitioners with sentimentality. I also came to understand the power of compassion.”

Shao Jun from Beitou started practicing Falun Dafa in 2015. In his four years of cultivation, he changed from having a depressed and extreme character to becoming an optimistic person brimming with happiness. He hopes to show the goodness of Dafa to everyone he meets and leave them with compassion.

Shao said that through the Fa-study and experience-sharing event, he understood that cultivating oneself well is the basis upon which Dafa practitioners can fulfill the three things they should do.

Shao also learned how to face his shortcomings and be motivated to cultivate diligently: “Through Master’s lectures, I understood that one must have enough determination to build a tower out of sand. One must persevere every day. One will be able to overcome ordeals if he can maintain his righteous thoughts. If one can cultivate oneself in a steadfast manner, his or her ability to clarify the truth will be sufficiently strong.”

Luan, a practitioner from Vietnam, is a student who came to Taiwan about two and a half years ago. He read about the Chinese Communist Party’s persecution of Falun Dafa online, which motivated him to look for Dafa books. After reading the Vietnamese version of Zhuan Falun, he started to practice Dafa.

After studying at Hwa Hsia University of Technology for the past year, he said the cultivation environment in Taiwan is very good. He noted that practitioners are able to do the exercises, study the Fa, and exchange cultivation experiences freely in parks, schools and public places. These actions are being restricted in Vietnam, and Luan says that he really cherishes the cultivation environment in Taiwan and that he will try his best to participate in Dafa activities.

He finds the activities beneficial: “I gained a lot. In the past, when I studied the Fa, I only understood it at the surface. Through studying the Fa and sharing experiences in a large group over these two days, I felt that fellow practitioners’ understanding of Dafa is very deep. They can understand the inner meaning of the Fa, and some of the papers are quite profound. I came to realize that when I go back home, I have to be more serious in studying the Fa.”

One speaker who left a deep impression on Luan was a practitioner who was in a conflict with her husband for more than ten years. The chronic conflict caused her to build up hatred toward her husband. Three months ago, this practitioner managed to let go of her hatred, and her husband’s attitude immediately changed for the better. She understood, “As practitioners, it is our thoughts and opinions that cause us to go through such an ordeal.”

Jin Lian, another practitioner from Vietnam, said that her mother was suffering from a serious illness last year that no doctor or medicine could cure. One of her friends introduced Falun Dafa to her, saying that practicing it may be able to cure her mother and help her regain her health. Jin Lian read Zhuan Falun to her mother at her bedside. Unfortunately, her mother did not accept Dafa, and she passed away about six months later.

Jin Lian, however, saw goodness in Falun Dafa while reading the book. After her mother’s passing, she started practicing Dafa on May 13, 2019. To be able to study the Dafa teachings in Chinese rather than Vietnamese and understand its deeper meanings, she came to Taiwan Danjiang University to study Mandarin the following month.

She said the large event provoked many thoughts in her. “I learned a lot from the reports of the fellow practitioners. My understanding of the Fa and my cultivation also improved. I also saw that I have many inadequacies and feel that I have many attachments that I need to let go of,” she reflected.

“My Story of Coming Back to Life”