(Minghui.org) Today's news from China includes incidents of persecution that took place in 8 cities or counties in 6provinces, where at least 32 practitioners were recently persecuted for their belief. 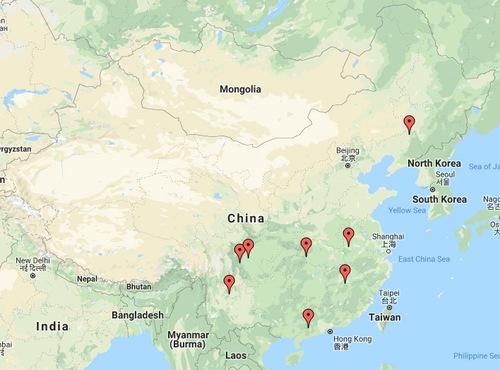 A large number of police officers rushed into a tea house in Yongxing Town in the Mingshan District and arrested 36 people, including 14 practitioners, on the morning of September 28, 2019.

Ms. Zheng’s whereabouts are unknown. The other thirteen practitioners were released on October 6.

Ms. Pan Ling from the Jinan District was arrested on the morning of September 21, 2019, for talking to people about the persecution of Falun Gong. Several officers ransacked her home, and confiscated Falun Gong books and other personal belongings.

Police officers went to her home again, and notified Ms. Pan's husband that she had been taken to a detention center for one year.

Officers from the Pinghu Police Department and several other police stations arrested several practitioners at their homes on September 20, 2019.

Officers rushed into the KFC restaurant on the first floor of the New Wanyuelou building on the evening of September 30, 2019. They searched and arrested Mr. Chen Weihuang and his wife, Ms. Chen Yuanying, and Ms. Shen Xuemei.

The four practitioners were taken to the Jiucheng Police Station, where their money and other personal belongings were confiscated.

The practitioners were later taken to the Luoding Police Department for interrogation. Police searched the practitioners’ homes at around 10:00 p.m., and confiscated Falun Gong books and other personal belongings.

Mr. Chen Weihuang and his wife were released at around 4:00 a.m. the following morning. Ms. Shen and Ms. Chen Yuanying's whereabouts are unknown.

Ms. Lei Xinghua, in his 70s, was arrested by officers from the Shuangqiaozi Police Station on September 29, 2019, for distributing Falun Gong materials. He was taken to the police station for interrogation, and later released.

Ms. Wang Gaoxiang, 65, a retiree from the Chongren County Transportation Company, was arrested by officers from the Bashan Police Department and the Chongren Domestic Security Division on April 23, 2019. Her home was ransacked, and Falun Gong books and her husband’s passport were confiscated. She was interrogated for nearly two hours in the police department, before being released.

Ms. Chen Xiangyun and her husband, who does not practice Falun Gong, were arrested at home by a dozen officers from the Qingxiangping Police Station on the morning of September 24, 2019. Her husband was later released. Ms. Chen’s whereabouts are unknown.

“Australia: People Voice Their Support During Practitioners’ Activities in Melbourne”