Slovakia: Activity in Hlohovec Calling for End to the Persecution

(Minghui.org) Falun Dafa practitioners of Hlohovec gathered in the city center to promote Falun Dafa and raise awareness of the persecution in China on October 5, 2019.

Falun Dafa, also known as Falun Gong, is an advanced cultivation practice of mind and body that was first introduced to the public by Master Li Hongzhi in 1992 in China.

The weather was a cold drizzle, but it didn’t stop the practitioners from demonstrating the exercises, while some practitioners passed out fliers and clarified the truth about Dafa to passersby. Many people signed the petition opposing the persecution. 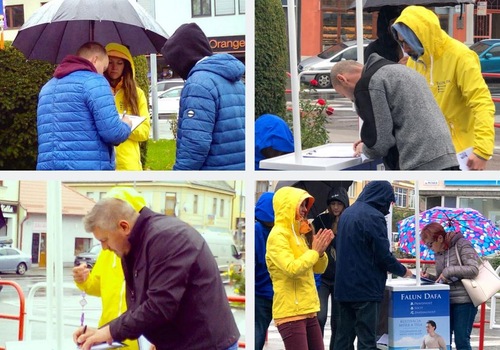 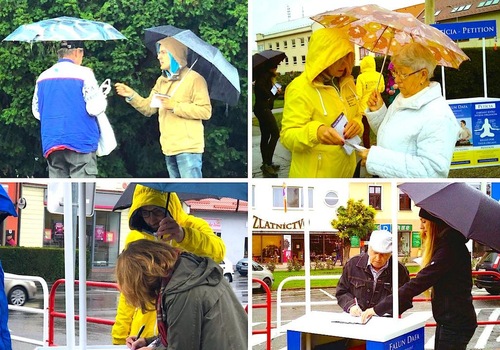 Residents of Hlohovec Slovakia sign a petition calling for an end to the persecution of Falun Gong.

Many people made similar comments, “You are doing this in a cold and rainy day. I believe what you told me. I will sign (to support you).”

After signing the petition, a woman said she wanted to learn the practice too. She was given contact information for the next free class.

A young boy watched the exercise demonstration and people signing the petition. A practitioner, not minding his young age, talked to the boy about Dafa, and about how the practice was being persecuted in China.

The boy wanted to sign the petition. The practitioner said he was too young.

“I know what I am doing,” answered the boy. Several more boys of similar age then came, and they all signed the petition.

“Clarifying the Truth in a Detention Center”