“What deserves to be congratulated the most is that while truth-clarification is being carried out, a great many people in the world are being saved, and a great many Chinese people have quit the evil Party's organizations, and they now have hope.” (“Dafa Disciples are Fulfilling their Mission,” Team Blue Translation)

“Of course, all of this could be achieved only by Dafa and Dafa disciples. Therefore, in order to be able to do even better, studying the Fa well is the only way for you to do better and complete this historic mission.” (“Dafa Disciples are Fulfilling their Mission,” Team Blue Translation) 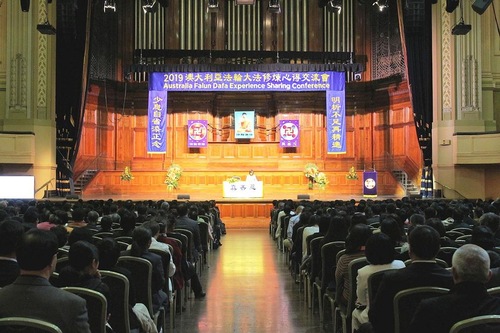 Twenty practitioners spoke at the conference. The subjects talked about ranged from following the Falun Dafa principles of Truthfulness-Compassion-Forbearance to become better citizens, to the hate propaganda publicized by the Chinese Communist Party (CCP), and addressing the subject of saving people.

Clarifying the Truth about Falun Dafa

After having benefited from Falun Dafa physically and spiritually, practitioners of all ages and professions have been looking for opportunities to introduce the practice to more people.

Ms. Zhou works at a language school and began practicing Dafa at a very young age. However, she slacked off because of school and seeking a better life. It was not until 2013 that she returned to the cultivation path, and regained her health. After several coworkers and clients mentioned to her about the goodness of Falun Dafa, she began to practice it as well. Realizing that many Chinese people had been misled by the defamatory propaganda inside China, she often goes to tourist sites on weekends to clarify the truth, hoping to clear up their misunderstandings.

“During this process,” she said, “I also learned to be more patient and considerate of others. That is, I improved on my cultivation path.”

Ms. Mi, who is employed full time, talked about the changes she made once she realized the importance of the mission of a Dafa disciple.

She said, “In the beginning I joined the group practice at a tourist site for my own cultivation. Later on, I started to tell people about the practice and the persecution.”

In addition to spreading information about Dafa through Facebook at her workplace, she also works on Dafa news media after work. The weekend routines include going to tourist sites on Saturday morning, recording audio files at noon for broadcasting to China, joining group Fa-study in the afternoon, going to tourist sites again on Sunday, plus taking care of household chores. “What I found is that once we put our heart into saving people, our productivity increases significantly.”

During the past 20 years Falun Dafa has been suppressed in China. Ms. Pan, 75, has been clarifying the truth about Dafa, so Chinese people will hear the real story of Dafa. She had gone to tourist sites in Sydney, local cities, and other countries.

Upon hearing the CCP history of violence and lies throughout every political campaign, as well as the recent persecution of Falun Dafa, many Chinese people decided to quit the regime. They include crew members from China Eastern Airlines and Chinese tourists ranging from school students to people in all professions. Over 100,000 people have quit the CCP due to her efforts over the past ten years.

“To do things well,” she said, “I have to study the Fa principles well, maintain righteous thoughts, and keep improving myself.” 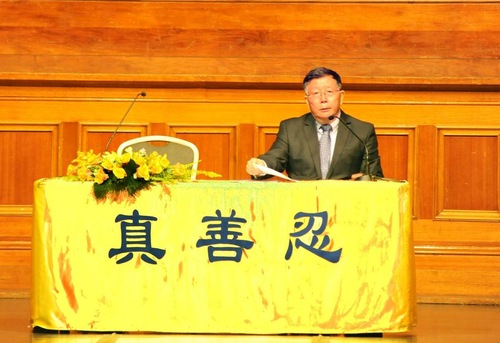 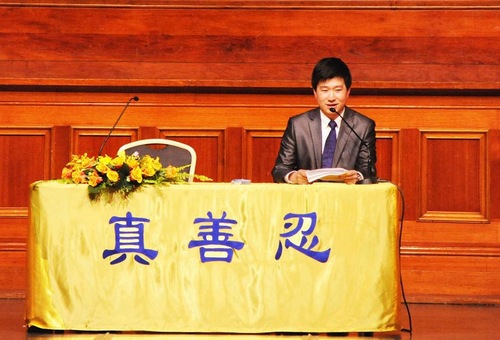 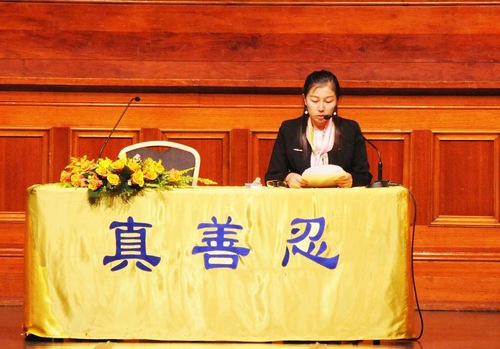 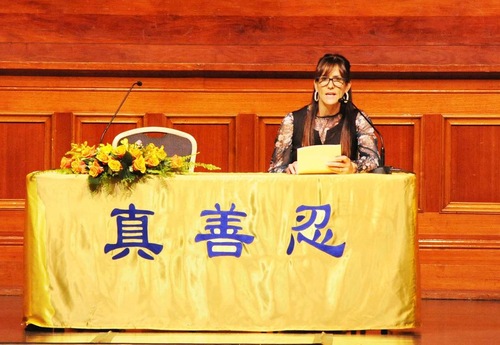 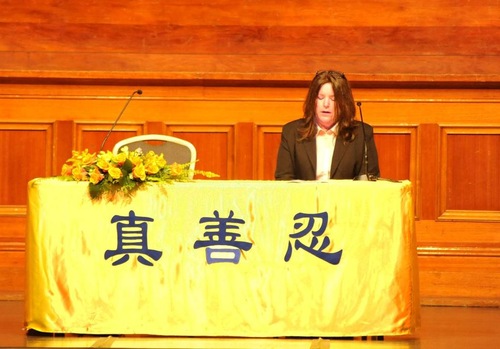 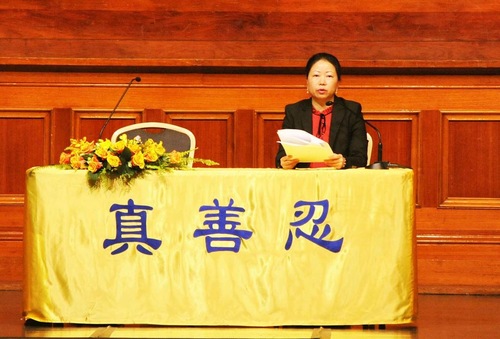 Twenty practitioners talked about their cultivation practice at the conference.

Mr. Fan, a coordinator for Shen Yun promotions, said that practitioners in general considered that the past season went well in terms of the Shen Yun promotion. He also agreed with it and was happy with the progress. When receiving feedback, however, he heard a lot of criticism, and there were few positive comments.

In the beginning, he found it difficult to take the criticism, and he tried to clarify certain issues. “However, after looking within,” he said, “and truly seeing myself as a practitioner, I found this to be an opportunity to improve. First of all, it is a reminder for me to remain humble. Secondly, the feedback was factual, which means that there are areas that need to be improved upon. More specifically, from selecting a theater, choosing a hotel, to promotion and logistics, all these need to constantly improve, instead of just repeating what was done in the prior year.

Ms. Guo, owner of a travel agency in Vietnam, began to practice in August 2015, and does the exercises every day. After a while, her two children joined her, as did her husband. “My entire family now reads Falun Dafa books together, as well as listens to audio lectures,” she explained. “As Master’s words sank into my heart, my family saw the changes in me. We have also become happier than before.”

Nearly 1,000 tourists watched Shen Yun last year with her help. Sometimes, she was very busy, and hardly had time for meals or sleep.

“But, thinking that people from all walks of life watch Shen Yun, I know all these efforts are worth it,” she said. As a Falun Dafa practitioner, she understands the importance of having people understand Dafa. “I am so happy working with other practitioners. Many things may seem simple on the surface, but they require dedication and hard work from us,” she explained.

Among new practitioners who recently started to practice, Ms. Li said she used to give watches, as well as monetary gifts to managers, to assure that she was assigned better projects, and gained additional profits. After becoming a practitioner, however, she stopped that and follows the Dafa principles. As a result, her coworkers found her more honest and trustworthy.

“As a practitioner, I am learning to let go of attachments to fame and material interest,” she said, “Interestingly, by maintaining honesty and integrity, I found my business is doing better than before.” Meanwhile, people who interact with her get to know Dafa, and some Chinese officials have even quit the CCP organizations.

Another new practitioner, Ms. Yin, said she had felt lost for decades, starting at a young age. Living in mainland China, she was influenced by the CCP ideology and did not have much hope in life. After being introduced to Falun Dafa and becoming a practitioner, she changed her attitude.

“Deep in my heart,” she said, “I know that something as precious as Falun Dafa has to be shared with other people so that they can improve their lives, like I did.” She has thus been hosting the Falun Dafa nine-day seminar workshops at her workplace and other venues.

During a business downturn last year, Ms. Yin had financial difficulty and there seemed to be no solution. She said, “The pressure was huge, but I decided to continue the nine-day seminar. I only had one thought—that this is most important and cannot be affected by my problems. I will leave other things to Master Li [founder of Falun Dafa].” Surprisingly, the situation changed, and all of her difficulties were resolved. Her agent, who is very experienced in business loans, could not believe it, and even verified with the bank headquarters to assure the truth of the improvement.

Maryann is a chef who became a practitioner in 2013. She said, “One day, I encountered several tribulations almost like the scenario described in Lecture Nine of Zhuan Falun.”

She continued, “At work, my supervisor said that another coworker and I were discriminating against someone. It was not true, but I had to work with the management team to deal with it. Secondly, after arriving at home, I received a phone call from my daughter, saying she had a crisis and needed me to babysit my granddaughter. Then, my son’s school called and said that he was suspended for some reason or another, and I needed to attend a meeting to discuss it. Later on that day, I also received a phone call from my relatives in the U.K., saying that my younger sister had been diagnosed with breast cancer.”

As a practitioner, Maryann realized she needed a strong faith in Falun Dafa, and considered these incidents as opportunities to improve herself. Guided by the principles of Truthfulness-Compassion-Forbearance, she resolved her son’s issue and her own conflicts at work. Through this, she earned the respect of her coworkers as well as the management team, and her cultivation state also improved significantly.

Besides work, she tries her best to participate in truth-clarification projects, including talking with government officials about Dafa. She said, “I used to be pessimistic and had low self-esteem. I realized that I had to overcome these human notions, and step forward.” With Master’s help, she met the member of parliament in her area at a group practice site, who not only attended a reception to celebrate World Falun Dafa Day but also issued a proclamation.

From these experiences, Maryann said she recognized the importance of solid Fa study and strong righteous thoughts. She said, “This way we will be able to see the power of Dafa manifested in our cultivation environment. As long as we do the three things solidly and diligently, we will see the positive effect and improvement in our environment.”

Susan began to practice Falun Dafa in 2010 and was involved in truth-clarification projects for several years. She said, “I realized that just because we participate in truth-clarification does not necessarily mean that we are genuine practitioners. Of most importance for practitioners is studying the Fa and constantly looking inward to improve.” In reading Master’s Li’s lectures prior to the persecution in 1999, she also greatly improved her understanding of the Fa.

Living in the remote countryside, Susan used to feel bad since she could not join Dafa activities like practitioners in big cities. Realizing that was an attachment, she found many ways to introduce Dafa to people, such as by mailing out materials. “I am so grateful to Master for all these—it is something beyond words,” she said.

Studying and Memorizing the Fa

Many practitioners talked about the importance of Fa-study. Ms. Li found it was important to memorize the Fa. “It is a process of testing my will power and ability to suffer, as well as an opportunity to improve my xinxing,” she explained.

Growing up in China, she was heavily influenced by the CCP indoctrination and the culture of violence and struggle. She said, “If we want to achieve a realm of compassion, and become like selfless enlightened beings, doesn’t it mean that we should always maintain peaceful and pure minds?” Memorizing the Fa helps her feel the power of Dafa, and makes her want to introduce the practice to more people.

Ms. Zheng said that she reads two lectures of Zhuan Falun daily, plus memorizes the Fa. She said, “Studying the Fa has become part of my life, and it is something critical for me.” Dafa principles give her wisdom and compassion and help her stay on track as a practitioner in this secular world of temptation and moral degradation.

Through the years Ms. Zheng has been going out every day to clarify the truth about Falun Dafa and helping Chinese people understand why the CCP keeps publicizing hate propaganda. She said, “Sometimes it was already late when I finished my work. I asked myself: “Will I still go out today? The answer is 'definitely'.” She has never neglected to tell people that Dafa is precious, every day, regardless if it is a hot summer day, a cold winter day, or rainy.