(Minghui.org) Falun Gong practitioners gathered in front of the Chinese Embassy in Stockholm at 9:30 a.m. on September 28, 2019. They condemned the Chinese Communist Party (CCP) for hiring thugs to assault practitioners in Hong Kong and called on the world to pay attention and sanction the CCP.

Throughout the event, the Chinese embassy loudly broadcast songs to interfere with practitioners' efforts to talk to people. 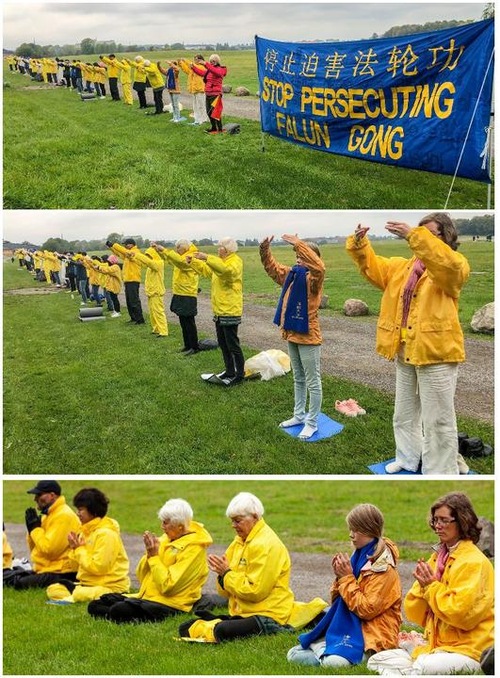 Falun Gong practitioners gathered in the rain in front of the Chinese Embassy in Stockholm on the morning of September 28, 2019. They condemned the CCP for assaulting practitioners in Hong Kong and called on the world to pay attention. 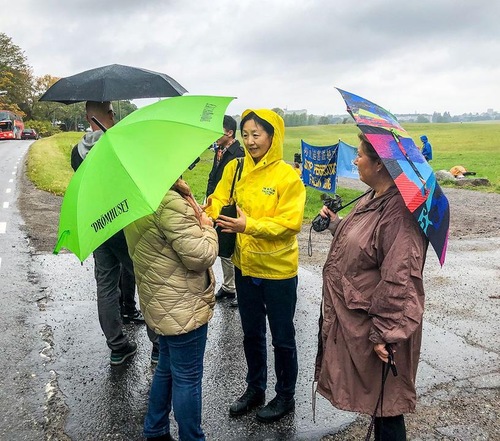 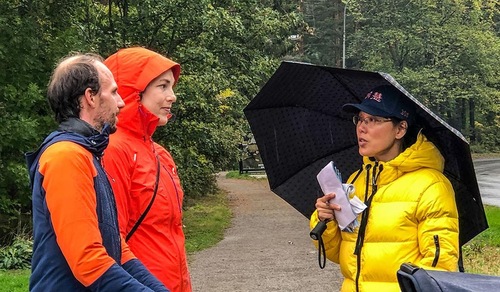 Practitioner Liao Qiulan and her friends went to the police station on the afternoon of September 24, 2019, to apply for a parade permit. Soon after she left the police station, two people wearing masks assaulted her on the street near the station, using batons similar to those used by police. They repeatedly struck her head. She was injured and bleeding. Swedish practitioners informed the public of this attack on Ms. Liao.

Soon after practitioners started their peaceful protest, shrill, discordant noises came from the Chinese Embassy building. In an attempt to stop practitioners from talking to people, several loudspeakers inside the embassy began loudly broadcasting songs. This is not the first time this happened. Practitioners were not moved. Despite the noise and the rain, they continued meditating, doing the exercises, and talked to passersby and police on duty.

Two Swedish women were surprised by what was happening. After the situation was explained they felt the embassy's interference was ridiculous. One woman said, “I have heard these noises here before and I didn't understand what was going on. The CCP is so vile. It seems that our western people's understanding of the CCP is pretty naive. We totally underestimate how evil the CCP is!”

A couple from Finland told practitioners, “We support you!” They said that they'd seen practitioners' peaceful protests in Finland several times. They were also watching the situation in Hong Kong where people from all walks of life are protesting the CCP. The couple condemned the CCPs attacking Falun Gong practitioners and people in Hong Kong. They encouraged practitioners to continue their efforts.

A Swedish man quietly listened while a practitioner told him about the persecution and the state-sanctioned organ harvesting from live practitioners. He said, “The CCP acts vile even in a free democratic country like Sweden. You can just imagine how evil the CCP is. It dares to do anything.”

Curious, another man came by on his bike. He was angry when he learned of the CCP's brutality. Many people condemned the CCP's atrocities and its attempts to infiltrate overseas. Several vehicles slowly passed by and read the banners and some gestured to encourage practitioners.

Jason is a doctor and a senior researcher. His family of five all practice Falun Gong. They frequently make the three-hour round trip to tourist sites to introduce Falun Gong to Chinese tourists. They tell them how they've benefited from the practice and explain the facts about the CCP's persecution.

Jason said, “What the CCP fears most is the truth. The Party hired thugs to assault a practitioner in Hong Kong. This clearly shows its fear and insane craziness while it is in its death throes. It has reached its end but it's putting up a last-ditch effort to survive.”

Werner works as a logistics manager at a school of the advanced arts in Stockholm. He and his mother, brother, sister, wife, daughter and son-in-law all practice Falun Gong. By following the principles of Truthfulness-Compassion-Forbearance his family is happy and lives in harmony. He said, “The CCP uses violence to eliminate any different voices. Its irrational attack on practitioners shows that its fear is bigger than ever, and this will definitely accelerate its end. The Chinese Embassy is using loudspeakers to interfere with us while we talk to people. This behavior helps Swedish people to see it's evil nature. We will continue the peaceful spreading of the truth and let all people know the facts about the persecution. We will never give up!”

“My Rough Path Seeking the Dao and Obtaining Dafa”