(Minghui.org) Today's news from China includes incidents of persecution that took place in 11 cities or counties in 7 provinces. According to this report, 8 Falun Gong practitioners were subjected to mistreatment during their detention, and at least 6 were illegally arrested. 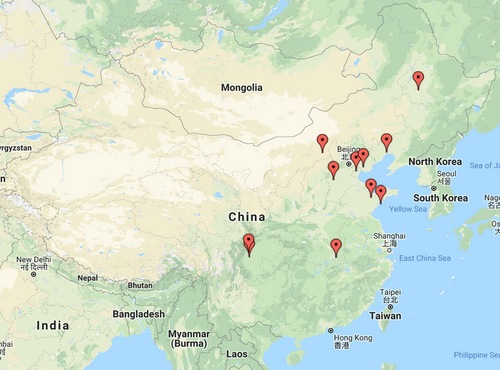 Mr. Fu Canhua, 72, was arrested by the deputy director and other officers from the Konglong Town Police Station of Huangmei County, Huanggang City on December 9, 2018. He was detained for four hours.

Mr. Fu has been arrested three times, detained, and fined for his belief.

Mr. Zhang Zhi was arrested at home on January 18, 2018, and his arrest was approved in March. He was sentenced to a four-and-a-half-year prison term, and is incarcerated in the Hulan Prison, Heilongjiang Province.

Since Mr. Zhang has refused to renounce his belief in Falun Gong he is not allowed family visits.

Ms. Li Yanqiu was arrested on December 14, 2018, for distributing Falun Gong calendars. The police ransacked her home and confiscated computers and Falun Gong books. She is being held in the Jinzhou City Detention Center for ten days.

Ms. He Daiping was arrested at home by officers from the Dajianchang Town Police Station on December 7, 2018. Her residence was ransacked, and a picture of the founder of Falun Gong and Falun Gong books were confiscated.

Ms. He was later released, but was harassed at home by the police on December 11.

Ms. Zhang Guozhen was arrested by three plainclothes officers from the Huanggezhuang Town Police Station on December 13, 2018. Her home was ransacked.

Ms. Zhang was taken to the police station and forced to sign their documents. She was later released.

Mr. Han Junping was arrested by Gu Yunlei, deputy head of the Xingtang County Criminal Division, and other officers on December 6, 2018. He was taken to the Xingtang Detention Center.

Ms. Zhang Hongxia and Ms. Zhang Lanfen were arrested by officers from the Gaoli Town Police Station on December 15, 2018, for distributing Falun Gong calendars. The police ransacked their homes and confiscated informational materials about Falun Gong.

Both practitioners were released later that evening.

Ms. Tian Jingbo was arrested at home in May 2018, and her residence was ransacked. She is being held in the Pudong Detention Center. Her case was passed to the local Procuratorate by officers from the North District Police Department.

Ms. Jiang Li was sentenced to a three-year prison term. She appealed, but the original verdict was upheld.

Ms. Jiang is incarcerated in the Sichuan Women’s Prison. Her family was informed that they can’t visit her until February 5, 2019.

Ms. Chen Shujun was arrested on December 17, 2018, for trying to take down banners that defamed Falun Gong around the town hall.

Ms. Li Guiying, Ms. Li Sufang, and Ms. Jia Pizhen were arrested by officers from the Xinghe County Police Department and Dianzi Town Police Station on December 31, 2017, for talking to people about the persecution of Falun Gong.

They all appealed, but the original verdicts were upheld by the Wulanchabu Intermediate Court on November 16.

Ms. Li Guiying is being held in the Jining Detention Center, while Ms. Li Sufang and Ms. Jia were taken to Hohhot Women’s Prison.