Chinese Tourist Quits the Communist Party: “I Want to Be a Clear and Pure Person!”

(Minghui.org) Falun Dafa practitioners in Hualien, Taiwan arrived at the scenic and beautiful Seven Star Lake, a must-see spot for tourists, on August 19, 2018.

They raised awareness about Falun Dafa, demonstrated the five meditative exercises, and put on music performances for the tourists there. 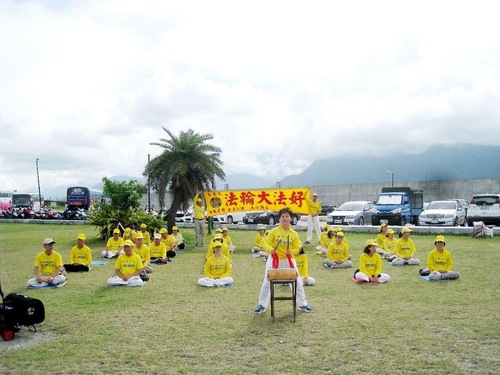 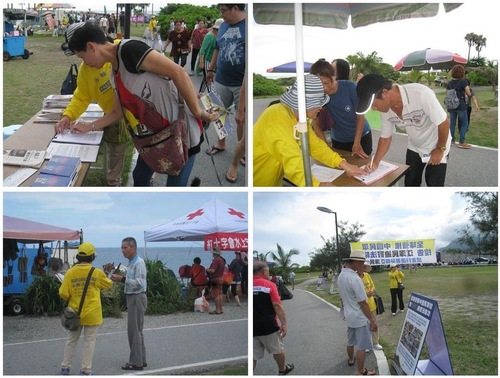 The people of Taiwan sign a petition in support of mainland China in prosecuting Jiang Zemin.

One gentleman from Hunan Province who was visiting Taiwan for sightseeing said, "I've been to the US, Tokyo, and Paris. I have often come across Falun Dafa [practitioners] and I learned a lot about the practice and the persecution in China. This time, I'm on vacation with my group, and yet again I see lots of Falun Dafa practitioners."

He told the practitioners, "The things you say must be real, because I have found that in places with a democracy, there is more honesty. Otherwise, how can these materials be freely passed out? I have to go back home the day after tomorrow. Please help me quit the Young Pioneers (one of the youth organizations of the Chinese Communist Party (CCP)). I want to be a clear and pure person!"

When practitioners urged another tourist from mainland China, Mr. Chen, to quit the CCP, he said, “I was a very naughty kid. As a result, when I hit fifth grade, my teacher wouldn’t let me wear the red scarf. I kind of regretted my actions at the time. But when I grew up and saw the actions and behavior of the CCP, I felt that I was actually lucky to not have joined any CCP organizations. I have a friend who works in the public security sector. One day he saw the independent documentary. He was asked to have a talk with his superior the next day and asked why he watched those films, and he was frightened. Mainland China is a country without human rights, without freedom of expression. It is a country where personal and harmless content on WeChat [social media] can be deleted by the government. The CCP wants to control people's thoughts and use fear to control its people.”

Mr. Chen also said, “I’ve heard of live organ harvesting as well, because my friend who works as part of the police force said that some organs come from convicted criminals, some come from Falun Dafa practitioners. This police friend also mentioned that Bo Xilai was involved in live organ harvesting and supplying human cadavers to international bodies exhibits.”

He continued, “This kind of political power can’t go on for long. The next generation won’t want to live in this kind of environment, so many people are trying to immigrate to other countries.”

A young student from Hebei Province in mainland China said he was on summer vacation with his parents. He had never heard of the 1989 Tiananmen Square Massacre of students from the democracy movement, or of the Chinese government’s organ harvesting from living Falun Gong practitioners. After seeing images and related reports, he chose to quit the Communist Youth League.

When practitioners helped him create a pseudonym to quit the CCP, he said with surprise, “That’s actually my real name, how did you know? How amazing!” He then said, “You should help my mother quit the Young Pioneers as well! (his mother beside him nodded in agreement) Thank you for telling me all this—I will share it with my classmates.”

There were also some people from Taiwan who stopped to sign a petition to support the people of mainland China in prosecuting former Chinese dictator Jiang Zemin and to bring an end to the persecution of Falun Dafa.