(Minghui.org) Today's news from China includes incidents of persecution that took place in 8 cities or counties in 5 provinces. According to this report, 9 Falun Gong practitioners were subjected to mistreatment during their detention, and at least 7 were illegally arrested. 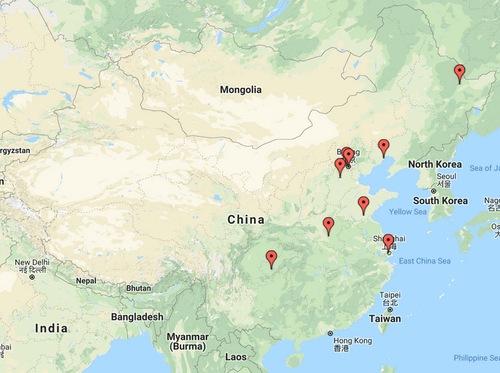 Ms. Chu Meirong was arrested by the Hegang City police in late August 2018. She was taken to the Hegang Detention Center.

Mr. Gao Wenzhi from Daochi Village in the Longgang District was transferred from Jinzhou Prison to the No. 3 Ward of Kangjiashan Prison in Yinjia Township, Shenyang City.

Ms. Meng Xiuhua from Yanqing County was sentenced to prison on August 28, 2018. She was taken to Daxing Women's Prison.

Mr. Cao, 28, from Jieshou City in Anhui Province is a quality inspector at a branch of a Beijing-based company. He was arrested at home by Tongzhou District Police Department officers on September 29, 2017, for talking to people about Falun Gong via QQ, a popular social media app in China.

He was indicted by the Tongzhou District Procuratorate on January 25, 2018.

Ms. Li Hanqing, in her 50s, was arrested by Liyuzhuang Police Station officers on September 5, 2018, after they found Falun Gong informational materials in her bag. She was taken to the Dagou Detention Center.

Ms. Liu Honglan, in her 70s, from the Liuqing Neighborhood, Beicheng New Area, Lanshan District, has been held in the Linyi City Detention Center for over two years.

Ms. Li Chunfang from the Nanfang Neighborhood was taken to the Linyi Brainwashing Center and later transferred to the Linyi Detention Center, where she was held for about three months.

Mr. Zhu Tonggui was arrested in early June 2018. He was taken to the Linyi Detention Center and tortured. He was later transferred to the Linyi Brainwashing Center.

Ms. Yu Peiling, who worked in Beijing, has been sentenced to prison and sent to forced labor camps many times. She was arrested after being released from the Nantong Women's Prison in Jiangsu Province. She was held in the Linyi Detention Center for nearly two years. She was recently sentenced to a three-and-a-half-year prison term.

Ms. Ye Xian was sentenced to a three-year prison term and taken to the Xinxiang Women's Prison.

Mr. Liu Shunmin from the Minhang District was arrested on October 12, 2017. His case was recently turned over to the Fengxian District Court.