(Minghui.org) Falun Gong practitioners from Bavaria, Germany, participated in the Neumarkt City Children's Festival on the second weekend of September, 2018. Politicians who were guests at the event, as well as adults and children, had a chance to experience the peacefulness and beauty of Falun Dafa. 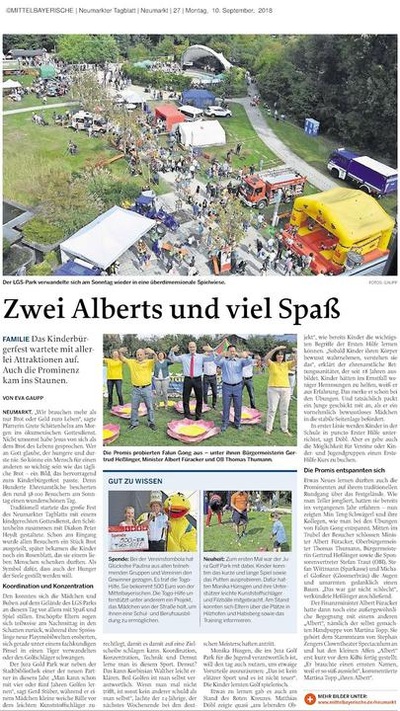 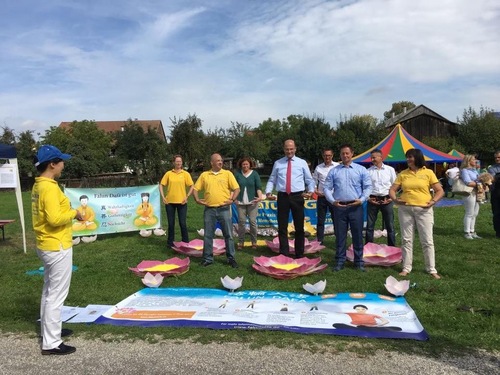 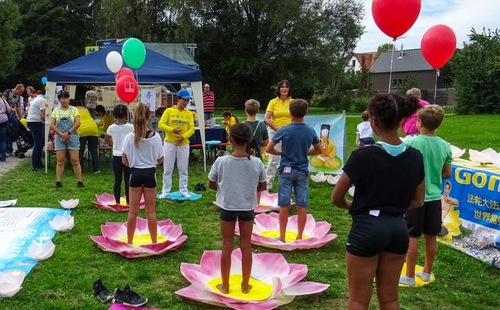 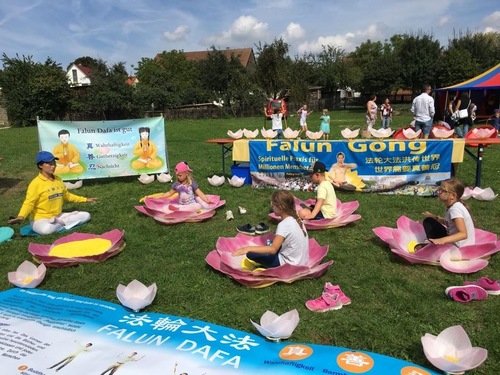 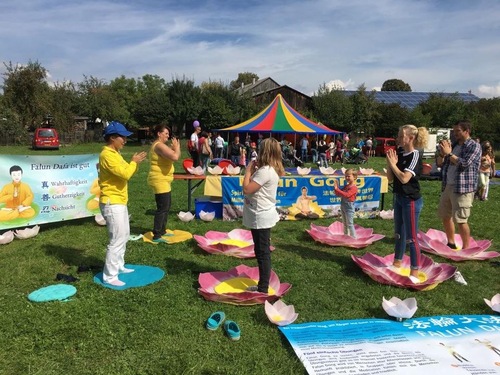 Adults and children learning the exercises

On the morning of September 9, Falun Gong practitioners from Bavaria went to LGS Park to participate in the annual Children's Festival organized by Mittelbayerische Zeitung, the largest media company in central Bavaria. Before the event, the paper reported on Falun Gong, describing it as an ancient Chinese practice of mind and body that even children can benefit from.

At the start of the festival, practitioners demonstrated the exercises. Ms. Gaup, the editor-in-chief of the newspaper, brought Mr. Füracker, Bavaria State Minister of Finance; Mr. Thumann, Mayor of Neumarkt City; Ms. Heißlinger, Deputy Mayor of Neumarkt City; and major sponsors to the Falun Gong display. Practitioners invited them to learn the exercises and they agreed. The mayor said he had a deep appreciation for Asian culture and believed Falun Gong could help one to relax. The deputy mayor commented that in the few minutes while she was doing the exercises, her mind was empty and she felt great. Everyone was given a handmade lotus flower as a gift.

Adults and children walked past the Falun Gong display in an endless stream. Several children who were interested in learning Falun Gong sat in the lotus flowers and did the meditation. Some managed to sit very quietly. Others tried to calm down by closing their eyes and listening to the exercise music. The adults were surprised to see their kids practice the meditation quietly. A few parents sat in the lotus flower with their children and did the exercises as well. Many people wanted to know more about Falun Gong after seeing adults and children trying out the exercises.

Besides teaching the exercises, practitioners also taught people how to fold lotus flowers, and signed their Chinese names on bookmarks. They made cards with traditional Chinese stories written on them and encouraged people to read them. A mother who read one of the stories told a practitioner she could not face a bad person calmly. The practitioner recommended that she read the main book of Falun Gong, Zhuan Falun. She told the lady how she became more positive after practicing Falun Gong.

The weekend after the Children's Festival, a family who found out about Falun Gong at the festival came to a practice site 45 km (28 miles) away to learn the exercises.

“Human Rights Lawyer Wang Yonghang: From Bystander to Victim to Witness in the Persecution of Falun Gong (Part I)”