(Minghui.org) Today's news from China includes incidents of persecution that took place in 13 cities or counties in 8 provinces. According to this report, 6 Falun Gong practitioners were subjected to mistreatment during their detention, and at least 14 were illegally arrested. 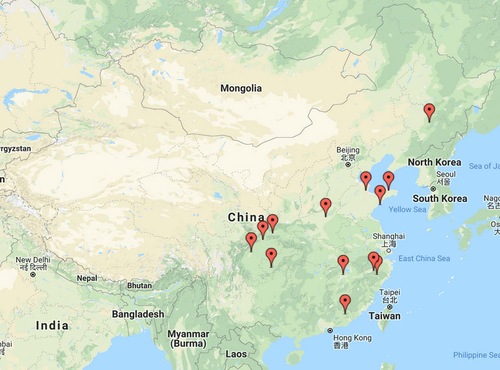 Mr. Li Guangqing was arrested by officer Chen Hongxing from the Guangyuan City Domestic Security Division, and officer Xu from the Jiangnan Police Station, on August 19, 2018. He was taken to the Guangyuan Procuratorate where he was interrogated.

Two practitioners were tried by the Jingyang District Court in June 2018.

Their terms are to be served outside the prison.

Officials extorted 4,000 yuan from each practitioner. In addition, another fine of 15,000 yuan was to be shared between them.

Ms. Wang Shupei was arrested by Zhaoyuan Domestic Security Division officers on August 17, 2018. The officers ransacked her home and confiscated a computer, satellite antenna, Falun Gong books, and informational materials about Falun Gong. She was taken to the Yantai Detention Center for a month.

Ms. Wang Yongxiu, Ms. Leng Xuankai, and Ms. Xie Shimei, from Jiaozhou City, went to the Fu'an Police station to deliver Falun Gong informational materials in mid-July 2018. They were arrested and their homes were ransacked.

The three practitioners were taken to the Pudong Detention Center.

Mr. Luo Chunquan and his daughter Ms. Luo Lifang were arrested at home by officers from the Xingning City Domestic Security Division on August 29, 2018. The officers ransacked their home and confiscated a computer and printer.

Ms. Xie Sihong was arrested by Xujiafang Police Station officers on April 20, 2017. She was secretly sentenced to a three-year prison term in January 2018.

Ms. Huang Huili, 51, and Ms. Geng Xianghong, 48, were arrested by the Xiliuhu Office staff for distributing Falun Gong informational materials on August 28, 2018. They were taken to the Guxing No. 3 Detention Center.

Ms. Shen Meizhen from Huzhen Town was recently arrested and taken to a brainwashing center.

Ms. Li Yuefen's husband was arrested and detained for ten days for attempting to stop officials from arresting his wife.

Mr. Zhu Zuoxin was recently arrested and detained for 15 days.

Mr. Hu Liangjie was recently arrested by officers from the Taiyanggou Police Station in the Yubei District.

“The Risk of Not Recognizing Fundamental Mistakes”