A New Practitioner's Wish to Share the Happiness of Falun Gong 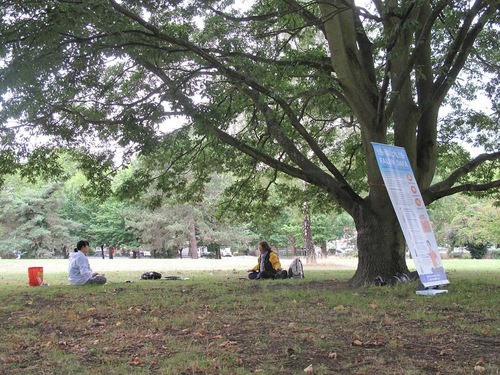 Lily and Kathy do the Falun Gong exercises in Alexandra Park.

Lily started practicing Falun Gong in 2016. Only a couple of days after she read the book Zhuan Falun, she was thrilled to find her old health problems gone. Practicing Falun Gong made her feel relaxed and happy. Lilly started to introduce Falun Gong to others in the beauty shop that she owns. Many of her customers wanted to learn Falun Gong, so she decided to teach them for free in Alexandra Park every Sunday morning.

Lily and several other Falun Gong practitioners who live nearby started doing the exercises together at this new practice site. They made sure that any newcomer could find someone to teach them the Falun Gong exercises here. Sometimes, more than 10 people might show up in the park on Sunday, wanting to learn. And sometimes, nobody comes by. However, Lily and her fellow practitioners never miss doing the exercises in the park every Sunday, despite their involvement in other activities.

The practitioners always set up a display board with a brief introduction to Falun Gong and have flyers available. Anyone who stops by can pick up an introductory flyer.

Lily has personally witnessed how her customers have benefited from Falun Gong. She said, “I play Falun Gong introduction videos on a TV in my shop. One day, a customer called Christie took a Falun Gong flyer. She later bought the book Zhuan Falun and watched the exercise teaching video. Six months later, she came to my shop and told me, 'I have read the book. I feel very relaxed. I used to have three kidney stones. Two of them have come out in my urine. I think the last one will be out too. I could feel energy entering my head when I read the book. Everyone should read it. It's a marvelous book!'

“Another customer named Anita had been diagnosed with cancer. She came to my shop one day after her chemotherapy. She looked weak. Her hair was all gone. Her nails looked terrible. I handed her a copy of Zhuan Falun in English and told her, 'Listen, Anita, I can't help you much, but this book has brought me, my family, and many others so much benefit. I hope you will be able to read it, at least try. If you like it, you can keep it. If not, you can bring it back to me.' She read the book. One day, she came to my shop and told me, 'I won't need to go to the hospital anymore!' One year later, she came back again. I could tell from her nails that her health had been restored. Anita told me she had downloaded Zhuan Falun on her iPad and reads it every day. I'm also encouraging her to come to our exercise group in the park.”