(Minghui.org) Falun Gong practitioners in Queensland held their annual experience sharing conference at a town hall/community auditorium south of Brisbane on August 5, 2018. Twelve practitioners shared their experiences in clarifying the facts and telling people about the persecution of Falun Gong in China. They said they believed that studying the teachings often and looking within to eliminate their attachments were the most important things in their improvement. 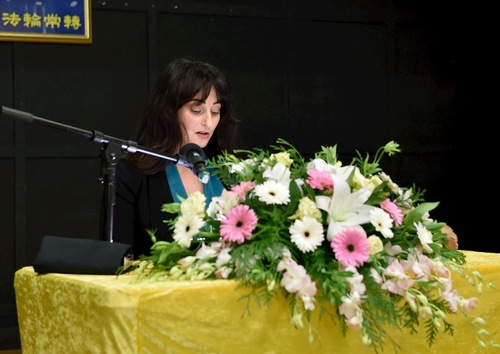 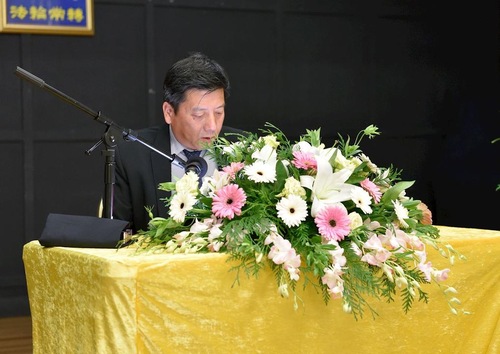 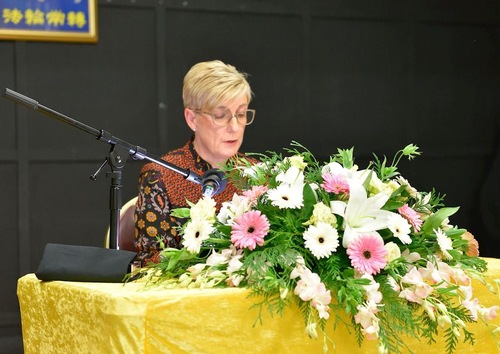 Falun Gong practitioners speak of their experience at the 2018 annual conference.

Nina, from Golden Coast, shared what she learned when promoting the film “In the Name of Confucius,” a documentary about the Chinese government’s multi-billion dollar Confucius Institute program and the growing global controversy at academic institutions around the world, as scholars, parents, and others question the program’s political influence and purpose. She talked about how she tried to be stronger and tougher when facing difficulties, and about feeling frustrated. “When I couldn’t see the results of my hard work, I became depressed and doubted myself. Through studying the Fa and looking within, I became sure about how to cultivate while doing Dafa work. I was able to do everything with all my heart and not be afraid. I could prioritize the importance of saving people instead of only looking at the outcome like an ordinary person.”

Hank shared how he found out and eliminated his attachment to lust and jealousy. He never took these attachments seriously until something happened at work which woke him up. He made a good impression on a new assistant and helped her in many ways at work. The two liked to chat more and more and the assistant confided in him and shared her private life with him, including what happened between her and her boyfriend. Hank listened and shared his opinion. One day he suddenly realized that all of this came from the impurity in his dimension and he saw his attachments to lust, showing off, and zealotry. He also realized that he hadn’t paid attention to what a practitioner should say. After he rectified his thoughts, he was still able to care for the girl and help her with work. However his actions came from the kindness and compassion of being a practitioner and not ordinary people’s affection. When the girl invited him to dinner on her birthday, he gladly agreed and took the opportunity to share his thoughts about practicing Falun Gong. The girl was very moved and said “Falun Gong truly teaches people to be kind.”

Louise told the practitioners how she stopped the urge to read Facebook posts and watch online movies. She used to be on Facebook all the time and believed that it was her platform for clarifying the truth of the persecution, but she realized that Facebook was in fact just a waste of her precious time, and had filled her head with a lot of ordinary people’s culture. Last December she decided to quit Facebook. However she still liked to watch online movies during the weekends, as she believed that it wasn’t a big deal to relax a little after a week’s hard work. She sometimes just wanted to read the news online for a few minutes but it turned into half an hour because she couldn’t resist clicking on the links that seemed interesting. She shared that after many attempts, and by studying and improving based on the Fa, she stopped browsing the Internet on her way to work on the train. She instead used the time to memorize the Fa. She is now also able to determine what to read or what not to read, and as a result she has become more efficient at work and more creative.

Another practitioner from Gold Coast told the story of how she helped promote Shen Yun, and how that experience improved her personality. Louise was in charge of marketing and giving out Shen Yun booklets. She started a little scared and later was able to balance her Dafa work and her ordinary job. She helped other practitioners to take the initiative when promoting Shen Yun and how to do it wisely. She said, “I will continue to look within every day to improve my personality in order to reach Teacher’s requirements. I am very proud to be able to coordinate the work in promoting Shen Yun.”

Ms. Zhao focused her attention on talking to people in China about the persecution and why they should quit the Chinese Communist Party and its affiliated organizations to stay safe. After she came to Australia, she went to Chinatown and other tourist destinations during the day to raise the awareness of the persecution of Falun Gong, and at night she called people in China to clarify the truth. She often helped those who seemed hopeless in changing their attitudes toward Falun Gong. “We must be compassionate and rational when clarifying the truth. We should say different things to different people, depending on their views. At the same time we must be brave and persistent.”