(Minghui.org) Today's news from China includes incidents of persecution that took place in 6 cities or counties in 4 provinces. According to this report, 8 Falun Gong practitioners were subjected to mistreatment during their detention, and at least 1 was illegally arrested. 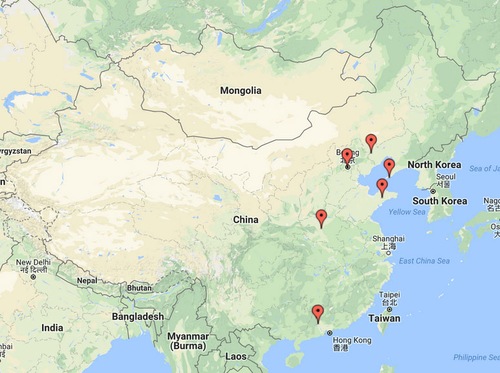 Mr. Zhu Dajiang from Pingjiang County, Hunan Province was arrested by officers from the Guanlan Police Station on January 1, 2017, when he was talking to people about the persecution of Falun Gong in Guanlan Town, Baoan District. He was formally arrested by the Baoan District Procuratorate on January 25, 2017.

The Baoan District Court put Mr. Zhu on trial on the morning of November 22, 2017. His wife came from Hunan Province, but was not allowed into the courtroom. Mr. Zhu attorney's defense was repeatedly interrupted.

Mr. Zhu was sentenced to a two-and-a-half-year prison term. He was taken to the Sihui Prison on June 28, 2018, before the intermediate court had made a decision on his appeal.

Mr. Jia Ruiping from the Daxing District was sentenced to a two-year-and-ten-month prison term and fined 6,000 yuan by the Daxing Court on July 20, 2018.

Mr. Jia has been held in the Daxing Detention Center since he was arrested in 2017, and has not been allowed family visits.

Ms. Wang Yuehong, over 50 years old, from the Shahekou District, was arrested at her home by six officers on the morning of July 20, 2018.

Ms. Yang Xuhong, Ms. Lin Baolan, and Ms. Liu Fengrong were arrested by officers from the Guandahai Police Station, Kazuo County on the evening of June 26, 2018.

Ms. Yang and Ms. Lin were taken to the Chaoyang City Detention Center, while Ms. Liu was released on bail because she failed the physical exam. She then had to leave home to avoid being monitored.

The three practitioners were formally arrested by the Harqin Zuoyi Procuratorate on July 19, 2018.

Ms. Gao Yongxiang was arrested on June 2, 2018, and taken to the Yangjun Police Station. Eight or nine officers from the Yangjun Police Station, Tuanwang Police Department, and Laiyang Domestic Security Division then ransacked her home, confiscating two computers, a DVD player, Falun Gong books, paper money with information about Falun Gong printed on them, and other personal belongings.

Ms. Gao's twelve-year-old son was at home at the time, and was taken to the Yangjun Police Station. He was released later that afternoon.

Ms. Gao is being held in the Fushan Detention Center, Yantai City, and has now been formally arrested.

More than twelve officers broke into Mr. Zheng Jianmin's home on the morning of July 19, 2018. They arrested Mr. Zheng and his wife, Ms. Yin Xiulan.

The officers ransacked the place and confiscated printers, computers, Falun Gong books, and other personal belongings. When their daughter tried recording the scene on her cell phone, the officers confiscated her phone and threatened her.

Mr. Zheng and Ms. Yin were interrogated in a police station for a day. Ms. Yin was later released, while Mr. Zheng was subjected to 15 days of detention.