(Minghui.org) Hundreds of English-speaking Falun Gong practitioners convened in Manhattan, New York City on Saturday August 25, for the second annual experience-sharing conference geared toward those who were raised in the West.

Attendees came from all over the United States’ Eastern Seaboard, gathered to learn from one another and share insights into overcoming cultivation trials and tribulations.

About a dozen practitioners took to the stage to present their experiences. 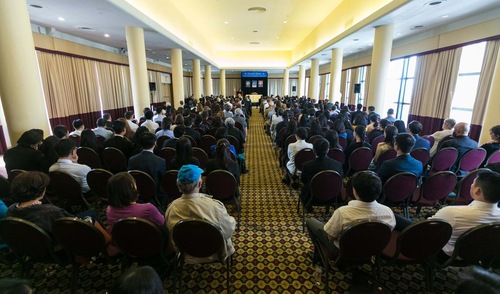 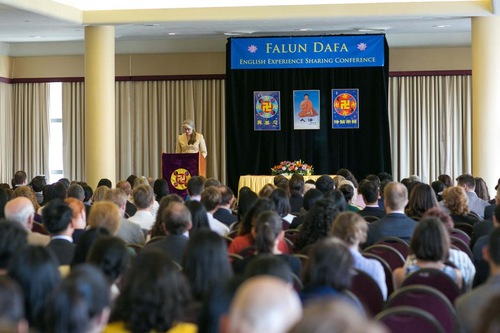 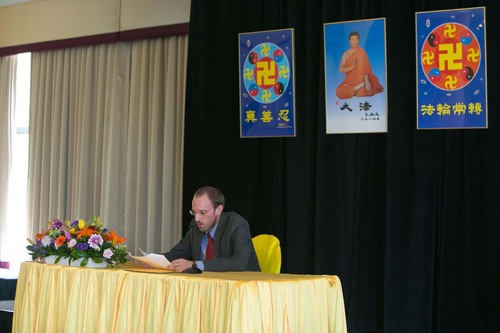 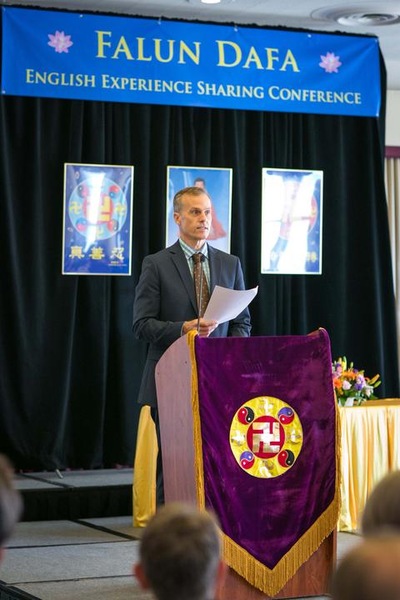 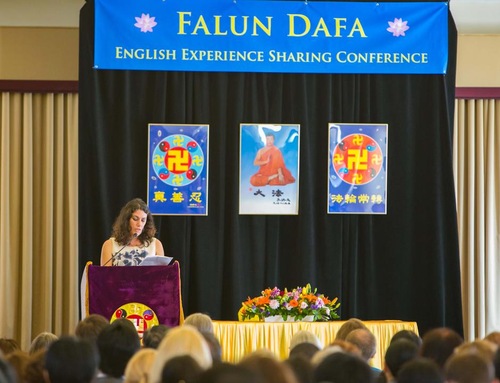 Thomas, a Chinese-American originally from California, spoke about finding his path from being introduced to the practice as a young child and not fully understanding how to follow the principles of Falun Dafa, to becoming an adult and learning the responsibilities of being a Fa-rectification period Dafa disciple. He had to eliminate various attachments in order to make the commitment to move to New York City and become involved in truth-clarification projects.

Scott from New York City shared about how it took him nearly a decade to learn how to read Zhuan Falun fluently in Chinese. Through that process, he learned to let go of his attachment to fame, reputation, and wanting to show off in front of fellow disciples. Reading the Chinese version has allowed him to better understand many Fa principles and enlighten to things he did not enlighten to before while reading the English version.

Nick from Washington D.C. shared about how he uncovered a fundamental attachment to feeling special and validated. Growing up in the United States with the idea of American individualism, he constantly felt the need to be considered unique. When he was rejected from a graduate school program, he became very upset and realized this attachment. Nick realized that every disciple is just a cell that comprises the whole body, and that all are insignificant beings in the greater cosmos.

Several practitioners shared about their tribulations while working at different media projects. Milene talked about how she overcame the feeling of being excluded and not appreciated—and learned to let go of resentment toward other practitioners. Lukas spoke about how his negative notions toward others created a rift in the body of practitioners; when he realized this and changed his thinking, relations between colleagues became harmonious and smooth.

Ileana, originally from Argentina, spoke about the harrowing experience of her pregnancy, where her daughter was born about four weeks past the due date. During that time, Ileana felt like her faith in Dafa and Master Li, the founder of Falun Dafa, was being tested. In the end, when she completely placed her faith in Dafa, her daughter arrived in the world peacefully. Now they walk their paths together to validate the Fa as a family.