(Minghui.org) The Falun Dafa Experience Sharing Conference in Indonesia was held on Saturday, August 18, 2018, in Batam. Practitioners from Singapore and Malaysia also attended the conference. 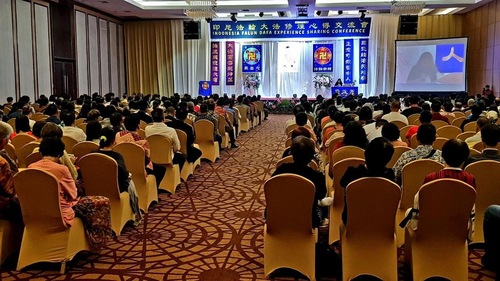 Eighteen speakers shared their stories of how they started practicing Falun Dafa, how they follow the principles of “Truthfulness-Compassion-Forbearance” in conflicts with others, and how they clarify the truth of Falun Dafa to the public. 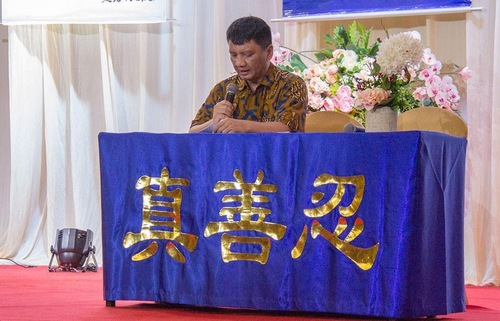 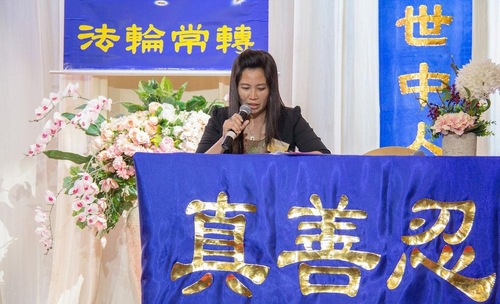 How Fortunate I Was to Find Falun Dafa

Mr. Su started practicing in 2005. Looking back, Mr. Su said, “I was deeply touched when I first read the book Zhuan Falun. I had a feeling that I had found something after a long search. I was so excited.”

He added, “When told that Falun Dafa was forbidden in China, I thought a lot about it. After reading all the Falun Dafa teachings, I decided to start cultivation. I later realized how fortunate I was to find this profound practice.”

Looking Within and Solidly Cultivating

Haini shared her experiences of looking inward for her own faults when encountering tribulations.

“When I deeply looked within I saw arrogance, being judgmental, competitiveness, and bias against others. All of these attachments are obstacles on my journey of cultivation.”

At the cultivation experience sharing conference in Washington DC this year, a fellow practitioner's speech touched Haini. She realized that arrogance stems from being jealous and a lack of compassion.

She said, “I often feel pain during conflicts. The more painful it was, the larger the attachment. If I could find the attachment and get rid of it, I would make a great improvement in my cultivation.”

Getting Rid of the Attachment to Internet Games

Niya started to practice Dafa in high school. She said that she had once gotten addicted to internet games. She could not stop playing them, although deep in her heart she knew that it was not good for her.

“When I was playing, I could feel that some substance was getting into my head, which soon made me addicted to it. It kept me awake playing at night. I was always tired during the day. I thought of the games when reading the Fa and sending forth righteous thoughts.”

“Our benevolent Master Li gave me hints several times in my dreams, which made me think. Finally, after joining a Falun Dafa march in Hong Kong, I obtained the power and courage to quit the games.”

Mr. Meng encountered a severe tribulation in 2010. His business was in serious trouble, and he was on the verge of a collapse. Back then, he had not started practicing Falun Dafa yet, but learned some teachings of the practice.

“It was the teaching of Truthfulness-Compassion-Forbearance that eliminated the bad thoughts. The teachings of Dafa changed my thoughts of destroying my opponents in business, and helped me to get rid of the attachment to wealth,” Mr. Meng said in his speech.

He continued, “From the teachings, I realized that when a conflict comes, focusing on other people's faults would make me angry. It is actually an opportunity for me to improve myself.”

Wayan shared his experience of overcoming difficulties at a Falun Dafa event. Before joining a march in Hong Kong, he hurt his foot. The march was long, and he was limping. Wayan thought of not going, but Master Li's words kept appearing in his mind and helped him to develop righteous thoughts. He kept going in the march until the end and overcame many obstacles.

When he returned home, he also had the opportunity to help a Chinese person on the plane to correct his misunderstandings of Falun Dafa.