(Minghui.org) Today's news from China includes incidents of persecution that took place in 14 cities or counties in 12 provinces. According to this report, 5 Falun Gong practitioners were subjected to mistreatment during their detention, and at least 15 were illegally arrested. 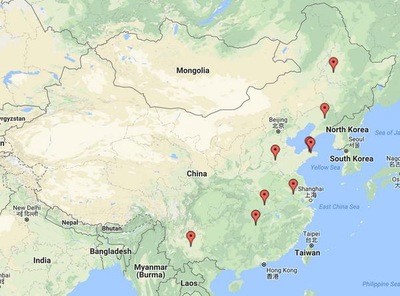 Ms. Liu Xuerong from Muping District was arrested by plainclothes officers while she was talking to others about Falun Gong in the Muping farmers market on the morning of July 17, 2018. Her home was ransacked. She is held in the Yantai City Detention Center.

Ms. Huang Huanzhi and Ms. Gao Xiaoping were arrested by officers from the Lihaiwu Police Station while they were distributing Falun Gong materials on January 27, 2018. They have been held in the Liaocheng City Detention Center for more than six months. Their cases were turned over to the Dongchangfu District Procuratorate. The Procuratorate filed their cases at the Dongchangfu Court.

Ms. Gao Cuifang will be tried at the Xundian County Court on the morning of August 10, 2018.

Mr. Li Ju, a primary school teacher from the Qinhuai District, was tried in March 2018. He was given a three-and-a-half-year prison term and fined 30,000 yuan on May 30. He appealed to the Nanjing City Intermediate Court, which upheld the original verdict during the second trial without a hearing on July 25.

Ms. Jiang Xiaoping from Jiang'an District was arrested at home by officers from the Yongqingjie Police Station, the police department, and the State Security Division on the morning of July 5, 2018. The officers confiscated her cell phone, computer, and Falun Dafa books. Ms. Jiang's whereabouts are unknown.

Ms. Zhang Yunfeng, 56, from Huanren County was arrested by plainclothes officers on July 30, 2018. She suddenly had a heart attack and her blood pressure rose to 220. She was released.

Mr. Wang Hai and his wife Ms. Han Xingli were arrested at the end of July 2018.

Mr. Lu Zuoxun from Fushan District was arrested by officers from the Hebinlu Police Station on the morning of July 14, 2018. He is held in the Yantai No. 1 Detention Center.

Mr. Sun Renzhi's nephew testified in his defense during a hearing in his appeal against his prison sentence.

Mr. Sun was arrested on April 9, 2017 and sentenced to 3 years in prison on May 22, 2018 for talking to people about Falun Gong. The Mianyang City Intermediate Court held a hearing on July 26. His nephew, Mr. Sun Houze, testified in his defense and demanded that his prison sentence be overturned.

The nephew emphasized that no law in China criminalizes Falun Gong and that his uncle should never have been arrested for his faith in the first place. Judge Wu Yingdi adjourned the hearing without issuing a verdict.

Ms. Shen Liqing was tried on August 1, 2018 for talking to people about Falun Gong.

Mr. Zhang requested that his client's handcuffs be removed, and the presiding judge agreed.

Prosecutor Yang Yuwei alleged that Ms. Shen broke the law by owning Falun Gong books and informational materials. Mr. Zhang countered that no law in China criminalizes Falun Gong and that it was lawful for his client to possess and spread information about Falun Gong.

The lawyer submitted two documents as part of his defense statements. He demanded his client's acquittal.

The presiding judge adjourned the session without issuing a verdict. Ms. Shen remains at the Zhangjiakou City Detention Center following her arrest on March 29, 2018.

Ms. Liu Shufang was arrested on March 23, 2018 and has been detained at the Datong No. 1 Detention Center. Ms. Liu’s mother hired a lawyer to meet her in the middle of May. However the detention center didn’t allow the lawyer to meet her.

Ms. Liu’s mother received a call from Yungang District Court at the end of June 2018, saying her case had been submitted to the court.

Mr. Zhao Lanchi and Ms. Wang Yanru were tried by Qingyuan District Court on the morning of July 25, 2018. The court entrance was blocked by officers from the Domestic Security Division and personnel from the comprehensive administration offices at the different level. They tried to stop Falun Gong practitioners from attending the trial.

Mr. Zhao defended himself and his daughter and a lawyer also defended him not guilty. The trial ended at 3:00 p.m. that afternoon.

Mr. Zeng Hao was arrested on August 10, 2017 and has been detained in the Haizhu District Detention Center.

Haizhu District Court tried Mr. Zeng on July 27, 2018. Five of his family members attended the trial. His lawyer defended him not guilty, pointing out that there was no victim in the case and the evidence submitted was illegal.

“Cultivate Until No Attachments Are Left”