(Minghui.org) Falun Dafa practitioners in New York were invited to introduce the meditation practice at The Victory Cup Polo Match in Patterson on July 14 and on Governors Island on August 4, 2018. The Victory Cup, one of the largest equestrian events in the United States, attracted more than 8,000 people, including many celebrities.

The practitioners, dressed in bright yellow shirts, set up a yellow tent on the lawn. Many people took the opportunity to learn about Falun Dafa. 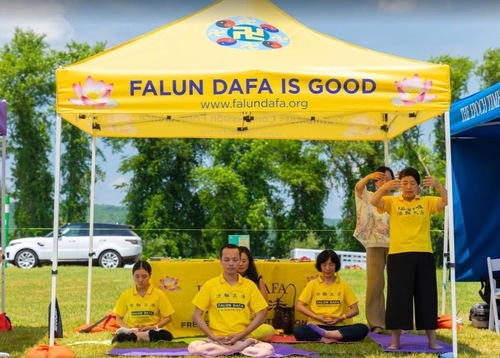 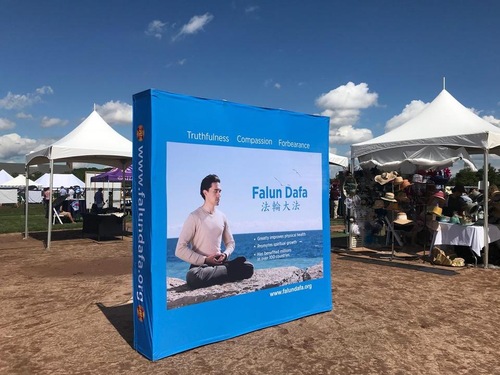 Display board on Governor's Island 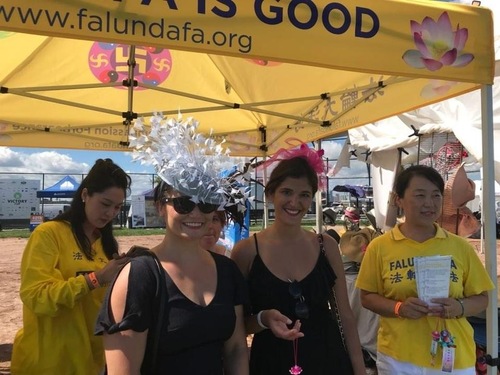 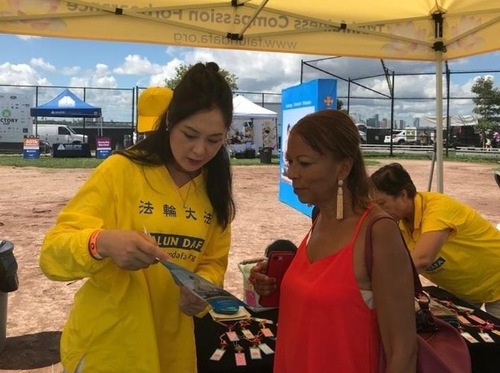 A woman named Sarah said she felt her heart was brightened by the Falun Dafa booth. Upon learning of Falun Dafa’s principles of Truthfulness-Compassion-Forbearance, she wanted to find out more about the practice. 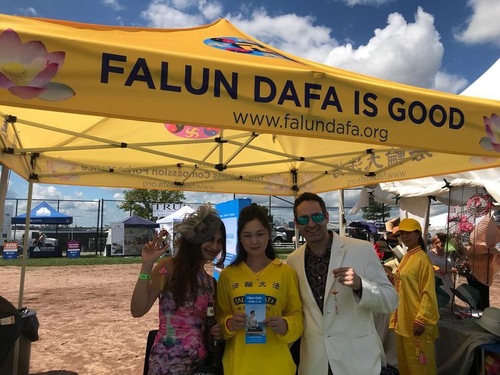 A young couple holds up their lotus flowers.

A young couple were amazed that the practitioners were able to meditate in tranquility in the noisy environment. The couple said that both of them had stressful jobs and wanted to find a meditation practice. A practitioner gave them information for a free instructional workshop that would be held from August 6 to August 14. 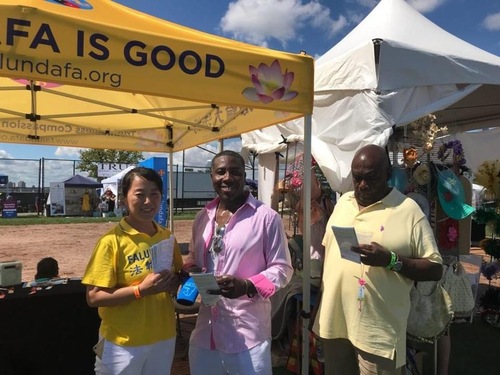 A Chinese man named Yuehua had heard about the persecution of Falun Gong by the Chinese communist regime when he was in China. He told a practitioner, “I know Falun Gong is great. It’s especially great for health. It has a marvelous effect on serious diseases.” He said he wanted to attend the Falun Dafa workshop in Flushing the next day.

A Chinese woman named Jinjin had also heard of Falun Dafa. She said practitioners’ parades in Manhattan and other places were spectacular and praised practitioners for their effort.

A man named Michael visited Beijing in 2001 and became interested in Chinese culture. A practitioner named Zhang Hongyu told Michael about the persecution she and her family had been subjected to in China. Hongyu's mother was thrown into the notorious Masanjia Labor Camp for practicing Falun Dafa and died from torture at age 51. Her father had previously been imprisoned for distributing Dafa flyers and now faced trial for his faith. Michael suggested that everyone, including himself, should step up and speak out for Falun Dafa.