(Minghui.org) “Six weeks flew by. I really don't want to leave! I am looking forward to next summer's Minghui Summer Camp,” said a 12-year-old student.

The 2018 Toronto Minghui School Summer Camp ran from July 3 through August 10. The camp offered lessons in Chinese classical dance, music, and traditional Chinese culture based on the classical literary works Journey to the West and Romance of the Three Kingdoms. 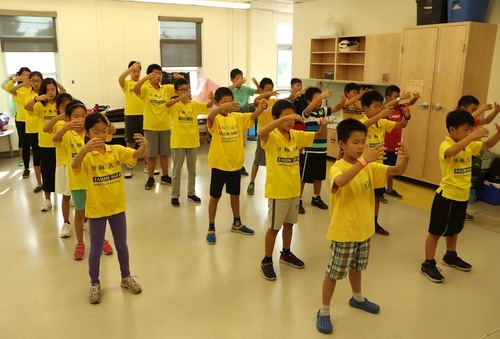 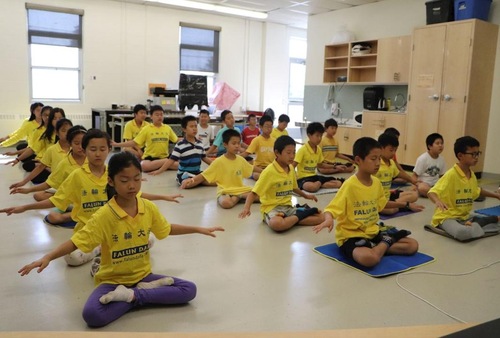 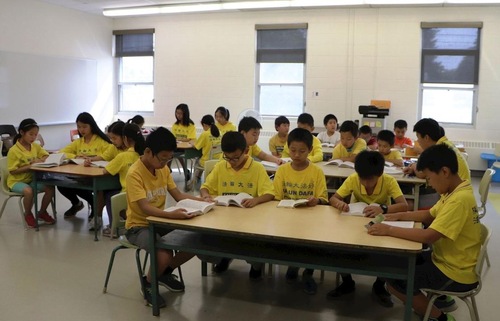 “I asked to come to Minghui School” 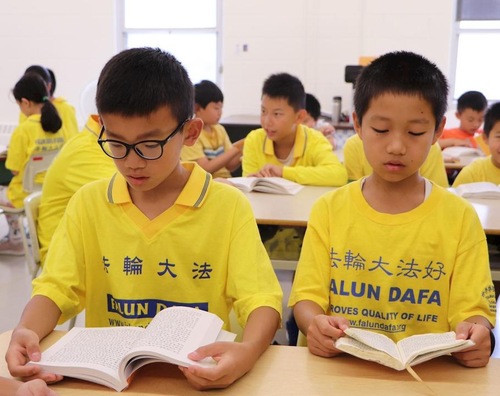 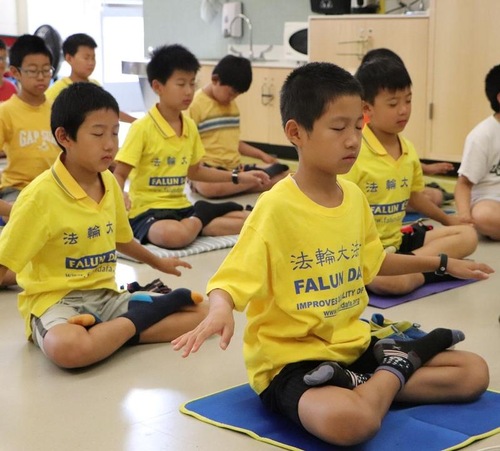 It was the first Minghui Summer Camp experience for Gordon Wei, an 11-year-old 6th grader. “My mother and I practice Falun Gong, and my father used to send me to summer camps [affiliated with] other schools. I asked for the Minghui summer camp this year. My father respected my decision and sent me here.”

“This is a very different school. I'm so glad that we have a schedule for Fa study and exercises. I can just join them here. I usually have many distractions at home and can't dedicate the time. I also have time to practice the violin here.”

Gordon said that his Chinese has improved a lot from the daily Fa study, reading Zhuan Falun in Chinese. “I have learned many traditional Chinese characters and stories of Chinese traditional culture,” said Gordon. “This is what I couldn't have learned at other schools. I love the stories. I'm a Chinese. It would be a pity if I didn't know my own culture.”

“We rarely have conflicts here,” he continued. “Because each student is a Falun Gong practitioner. We all know the requirements. I haven't had any conflicts in the past six weeks. Everyone has been nice to me. We all know to search inward and be considerate and tolerant of each other.”

The school doesn't allow online games or smartphones. Gordon said, “My mom had told me that video games were not good. So I stopped playing. In the 4th grade, my school provided video games to students during the lunch break. I played for about 10 minutes once. My head hurt and I was dizzy and sweating. I have not played any video games since then. I didn't even think of it at the Minghui school because no one plays them here.” 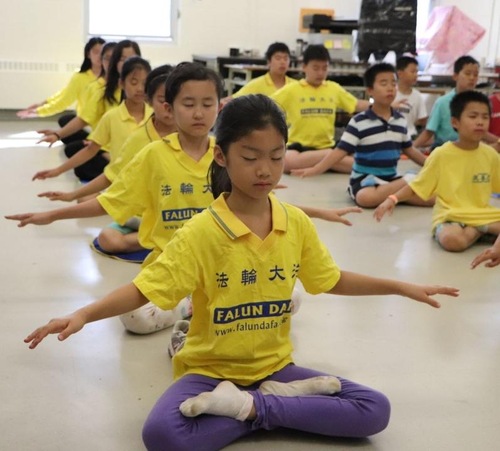 “I've wanted to join the Minghui school. I asked my mom to look it up for me. She found the Minghui Summer Camp in Toronto. So here I am,” said Annie Cheng, an eight-year-old from Minnesota in the United States.

“I like it here a lot because we can all study the Fa and do the exercises together. Fellow students rarely argue or fight. We all search inward and say 'it's my fault.' Conflicts disappear then.”

Annie didn't want to leave when her mother came to the school to pick her up, “I have to leave so soon? It felt like just a week. I don't want to go. I have made so many good friends here.”

“I feel so much lighter after quitting video games” 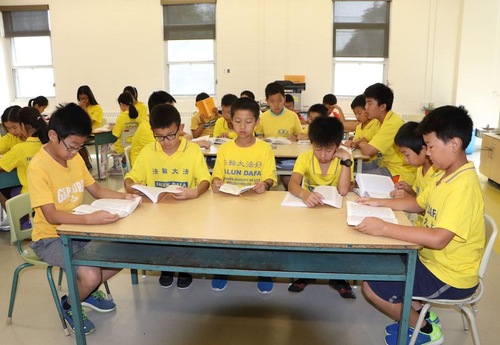 Michael Wang will be a 5th grader. “I have been cultivating with my mom since I was very little,” he said. “I started memorizing Hong Yin when I was two years old. Minghui school is different. We all resolve conflicts shortly after each quarrel, then we are back to being good friends again. People don't fight here and there is no need to report to teachers to solve problems.”

Speaking of video games, Michael said, “I just completely quit last year. Mom has been telling me not to play video games. I know it's not good for me, and I know I became irritable each time I played the games. I couldn't control myself and had to do bad things such as taking things without permission or fighting with others. I didn't want to be controlled by demons, so I made up my mind to quit.

“It was difficult at the start. I sometimes took a run or walk outside when I really wanted to play video games. It took me 2 weeks like this to quit them. I feel so much lighter since I quit video games. My temper is much better too.”

“I have learned to be considerate of others” 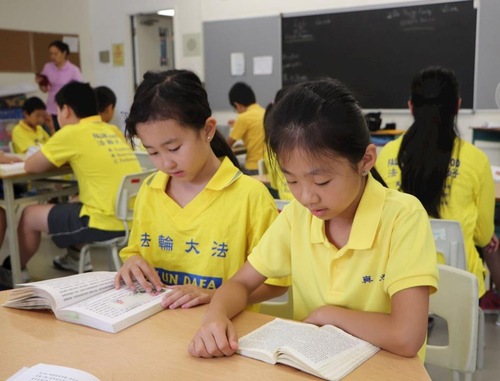 Emma He, nine years old, is learning Chinese classical dance, Erhu (a traditional Chinese stringed instrument), and piano. She said, “My mom told me that I have been listening to the Fa since I was born and cultivating since I was very little. I have learned at the Minghui school how to be considerate of others. For example, when I was playing chess and started winning and I saw that my friend was not very happy, I let her win more. Then she was happy, and I was happy, too. We can both have fun in this way.

“I also tolerate my mom when she is mad. I bear her lectures and don't talk back. Otherwise, she will be more mad. Sometimes I remind her not to be upset or run away if she cannot cheer up. Once I was practicing the Erhu, she came to my side and started telling me that I made mistakes. I knew that she didn't know how to play the Erhu, but I kept my mouth shut. She then stopped,” she smiled. “I know she cares about me.” 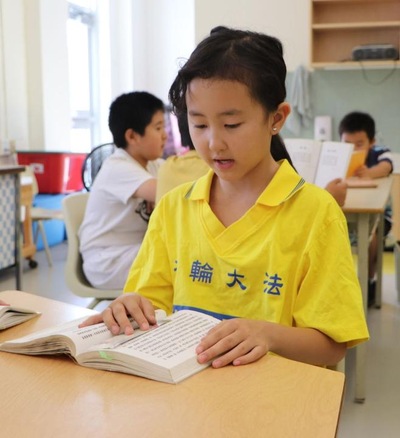 Ten-year-old Sophie chimed in, “A fellow practitioner once wanted to play a game that both of us liked, but another wanted to play a different game. We didn't agree and the third practitioner wasn't happy and stood aside. I thought, 'Aren't we supposed to have fun?' We all should be happy. So I convinced my friend to play the other game together.”

“The environment is very pure” 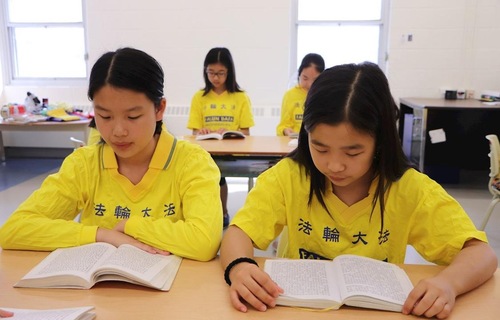 Twelve-year-old Lisa said that the environment at the Minghui school is very pure.

“We have time for group Fa study and exercises. I cannot guarantee that at home – I often get distracted. Therefore, I have been waiting for the summer camp. I can make good arrangements for Fa study and exercises every day. I feel so much inner peace because practitioners should study the Fa and do the exercises. In addition, we learn Chinese traditional culture and traditional Chinese characters here. We remind each other to look inward.”

Lisa gave an example: if she tells a friend at Minghui school that she is in conflict with another, then the friend will say, “Think about where you are at fault first.” Then Lisa looks inward and apologizes to the student she had a conflict with. The other student will also search inward. Then the conflict will soon be solved and no unresolved gap remains. Lisa noted, “However, in another school, my friend might start saying bad things about the other student and worsen the conflict. This may eventually create factions among students.”

Lisa also said that there was no bullying at the Minghui school. She said that she knew a girl in her middle school. The girl had scars on her wrists and she told Lisa that she had attempted to kill herself quite a few times because of being bullied. She told Lisa about her experiences and pain. Lisa told her to be tolerant of the bullies because the bullies were doing bad things and were actually harming themselves. She introduced Falun Gong to her and recommended that she read Zhuan Falun. Her friend is more confident now, and her situation has improved a lot. 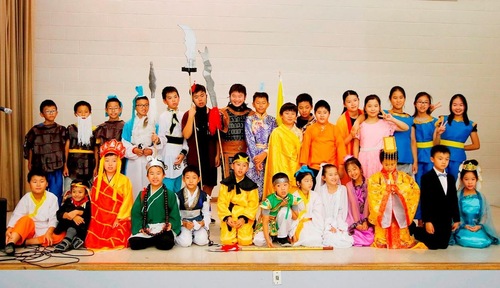 Group photo after a play from "Journey to the West" on the last day of the camp.