(Minghui.org) When Shao-chun was very young, he often wondered why people came to this material world, which he felt was wrought with pain and suffering. “I had the distinct feeling that I had been abandoned by heaven,” he recalls.

When he received a flier from a Falun Dafa practitioner in 2015, he decided to find out more about the practice. He later visited a nearby exercise site where he learned the five Falun Gong exercises. 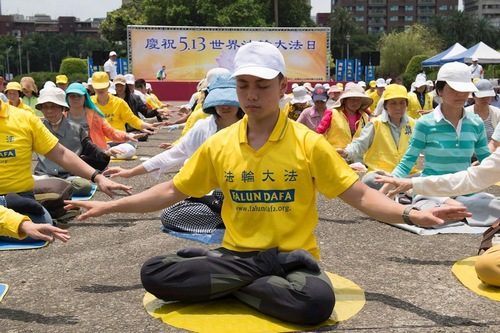 Shao-chun participates in group exercise practice at the World Falun Dafa Day celebration in May 2018.

Prior to practicing Falun Dafa, Shao-chun volunteered at the local food bank, helped the poor, and used his skills to provide free housing for the Taiwanese aborigines.

Although he knew that life was filled with endless hardships, it wasn't until he began practicing Falun Gong that he understood the meaning of human existence.

Changing from Having a Hot Temper to Calm

Shao-chun used to get easily irritated and lost his temper when others didn't agree with him. Thus, he often argued with his family members.

Now that he conducts himself according to the principles of Truthfulness-Compassion-Forbearance, his family says that he is more “open-minded, peaceful, cheerful, and understanding.” They know that Falun Dafa is good and fully support his decision to take up the practice.

Truly Good to Others

Shao-chun, 25, is a police officer. The four officers in his group respect him for his willingness to work long hours when the need arises.

In his spare time, he helps raise awareness of the Chinese Communist Party's (CCP) persecution of Falun Gong in China and introduces the practice to people on social media and in his local community.

Shao-chun shares his insights with those around him so that they, too, will have the correct view on things, enabling them to discern right from wrong.

He also displays posters about Falun Gong at tourist sites in Taiwan, which are popular with mainland Chinese. He often goes to Hong Kong during the holidays to participate in Falun Gong parades.

One day, he held up a signboard in Hong Kong depicting the brutal persecution of Falun Gong in China. He saw a tourist from Shenzhen City point at him, saying to the person next to him, “This guy is too young to be involved in Hong Kong's struggle for autonomy with China!”

Shao-chun kindly told him, “A person should be judged based on his level of morality. It's a heavenly principle that good will be awarded and evil will be punished.

“We're telling people the truth so that they'll be able to see the evil nature of the CCP.” The other party stopped talking and quietly listened.

Since Falun Gong practitioners conduct themselves according to the principles of Truthfulness-Compassion-Forbearance, not only does it validate Dafa, but it also cuts through the CCP's slanderous lies!

“Centenarians Experience Miracles When Believing in Dafa (I)”