Taiwan: Persevering in Clarifying the Truth to Mainland China 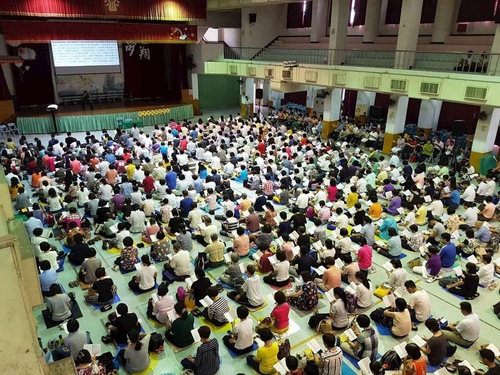 Truth clarification is the term Falun Gong practitioners use to describe their efforts to raise awareness of the persecution in China as well as in sharing the beauty of the practice of Falun Gong. The need for clarification is because the Chinese communist regime has been spreading lies through its nationwide media outlets to demonize Falun Gong in order to justify the brutal, 19-year persecution of the practice.

Over the years, Falun Gong practitioners have explored a number of ways to reach out to people on the mainland, and have created many channels such as telephone, Internet, cell phone messages, and so on.

Speakers at the conference shared many moving stories. Quite a few conference attendees said that they had firmed up their dedication to the truth-clarification efforts and would persevere in their efforts until the persecution ends.

A Lawyer Agrees to Take a Falun Gong Case

Ms. Zhang also quoted attorney Yu Wensheng in his defense arguments, “The so-called 'cracking down on Falun Gong according to law' is a lie. Defending Falun Gong practitioners is upholding legal justice, as well as safeguarding the universal values of Truthfulness-Compassion-Forbearance, and fulfilling the highest mission of upholding justice in the society.” Ms. Zhang believes that more and more Chinese lawyers will step up when they gain a better understanding of the importance of safeguarding Falun Gong.

She also shared her experience of changing a policeman through compassion. She told several young policemen who cursed at her over the phone, “Policemen should be the role models for people. You shouldn't curse. I have treated you as my children and students. I hope that you can behave according to Truthfulness-Compassion-Forbearance, and become a truly good person and good policeman.” One of them sincerely said that he would.

Tempering Oneself During Coordination Work

Ms. Gong Hanqin is an introvert who used to be afraid of interacting with people. However, in order to help with truth-clarification efforts to mainland China, she became a coordinator for promoting cell phone messaging. Because she doesn't drive, she takes public transportation to different Fa study groups to introduce mobile messaging as a channel for clarifying the truth. She often travels with heavy equipment such as a laptop and projector.

“Master's compassion enables me to elevate. I could have never imagined that I would become such a brave and capable person. I am doing things that I used to consider impossible!” Ms. Gong shared.

In addition, she started teaching online to help with another truth-clarification project. She realized that her initial perfectionism and negative notions had cost the project some progress. So her teaching became more and more comprehensive. She also overcame the attachment to calculating loss and gain.

Ms. Gong's online teaching is currently benefiting overseas practitioners. She realized that things often turned around when her determination to save people became stronger.

Demonstrating the Beauty of Falun Gong at Tourist Sites

“To call on the conscience of Chinese people, to help them rid the control of the evil Chinese communist specter, and to enable them to secure a better future, we have persevered at tourist sites, rain or shine,” Ms. Yu Lixue said as she shared her experience of clarifying the truth at tourist places in recent years.

Jewelry stores are a hot spot for mainland Chinese tourists. Sometimes the number of tour buses can be more than 40 in a day. As a result, vendors have increased. Some of them initially thought that the presence of Falun Gong practitioners would harm their business, and they were not friendly to practitioners.

However, practitioners reminded one another: we should search inward under all circumstances and we should be kind to all people. Then, the environment started to change.

Practitioners developed good relationships with vendors. They would bring each other fruit or soft drinks. A fruit vendor once couldn't start his engine. Practitioners pushed his van for him. The vendor was very thankful and had since completely changed his attitude towards Falun Gong.

As a daily routine, practitioners cleaned around the tourist sites first each day before they clarified the truth. A typhoon turned the park into a total mess once; practitioners cleaned up the park. Vendors experienced practitioners' selflessness and kindness. They became interested in learning the facts of the persecution; some signed the petition to bring the chief culprit, former Chinese president Jiang Zemin, to justice. Some took their families to see Shen Yun Performing Arts. As the environment changed, more mainland tourists took materials and interacted with practitioners. Many surrounded practitioners to learn the facts. More have quit the Chinese Communist Party and its affiliated organizations.

Several middle-aged Chinese tourists came out of a jewelry store one day. Ms. Yu and another practitioner approached them to talk about Falun Gong. They started cursing at the practitioners. Ms. Yu simply smiled and was able to learn that their misunderstanding was rooted in the lies of the Chinese government propaganda: that Falun Gong plays politics, is anti-China, and aims at causing chaos in the world.

Ms. Yu remained calm and said to one of them who looked more open-minded, “In the less than 70 years since the Chinese Communist Party (CCP) has been in power, it has maintained its power through violence and lies. Eighty million Chinese people have suffered unnatural deaths as a result of waves of 'struggles' by the CCP. The persecution of Falun Gong is the latest 'struggle.'

“The CCP has committed so many crimes that its payday is around the corner. If you continue to be a member of the CCP – and think about it, you swore to dedicate your life to it at the joining ceremony – you will receive retribution at the same time that the CCP meets its end. We are telling people about quitting the CCP and its affiliated organizations because we don't want to see that happen to you.”

He agreed to quite the communist organizations, and so did his companions.

Keep Calling Until the Persecution Ends

Ms. Li Xiuyuan from Tainan has a noodle business. She had to work 14 hours a day. Therefore, when it came to calling China to clarify the truth, she seized every second she could use. She now stays home to take care of her mother and has to be on stand-by 24 hours each day. Time is now even more of the essence. She has been using her cell phone to dial China to help people learn the facts of the persecution.

Ms. Lin would reorganize the phone numbers assigned to her each time and plan according to different cases of persecution. She told herself to call each number at least 5 times. If no one answered or the outgoing message said that the person was in the middle of another call, she would try at a different time. Sometimes the recipient took the call and was quite willing to learn about Falun Gong. Ms. Lin has kept up her determination because she sincerely hopes that people will answer her calls. Even the short sentence, “Falun Gong is good,” may offer the hope of salvation.

Ms. Lin was afraid and couldn't say anything. She only heard her heart pounding. Upon reflection, she told herself, “Saving people is the most righteous thing in the universe. What am I afraid of?”

She shared with other practitioners and called again, “I have been calling you precisely because I practice Truthfulness-Compassion-Forbearance. Because I cherish your life. I have to tell you the facts and save you! I don't want you to continue to be fooled by the lies of the propaganda and commit crimes in aiding the persecution of Falun Gong... I am calm even though you have not been nice to me. Don't you think I am following Truthfulness-Compassion-Forbearance?”

Ms. Lin said that even if only one call goes through among 100 calls, it would be worth the effort, “Every call carries the facts. Every ring shocks the evil. I will keep calling until the persecution ends.”

“Letting Go of the Attachment to Money”