(Minghui.org) Joining others around the world, practitioners in the U.S. and Canada held public activities last week to raise awareness of the Chinese regime’s persecution of Falun Gong that has now entered its 19th year.

Practitioners from around the American capital held a peaceful protest in front of the Chinese Embassy on July 22. 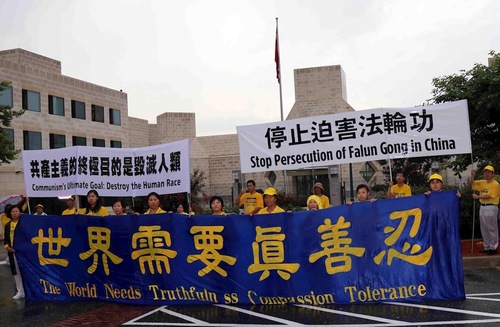 Practitioners protest in front of the Chinese Embassy on July 22, 2018. 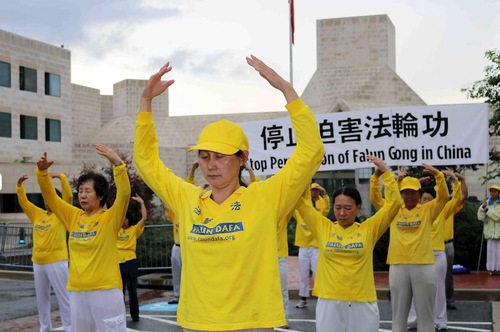 Ms. Cong Dayang was an artist in Beijing. She was arrested in August 2002 for practicing Falun Gong. After being detained for 16 months, she was sentenced to 10 years in prison. “In the severe persecution, I have witnessed the purity and greatness of Falun Gong,” she said. 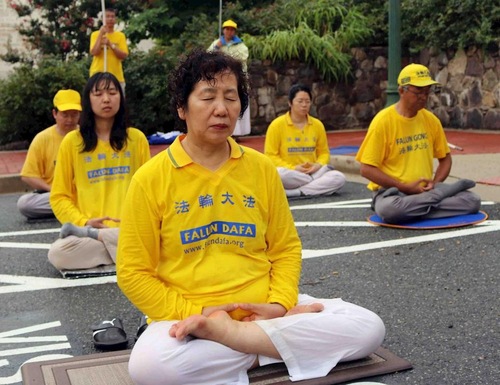 Ms. Wang Chunyan was a successful businesswoman. During the persecution, she and two of her sisters were imprisoned for their faith. “Twenty of my friends and family members, including my husband, lost their lives in the persecution,” Ms. Wang said, “Although the persecution is brutal, I feel fortunate that I have chosen a righteous practice that improves my mind and body and keeps me from becoming morally corrupt.”

Practitioners in Atlanta demonstrated the Falun Gong exercises at Stone Mountain State Park, where they introduced the self-cultivation practice to tourists and informed them about the persecution in China. 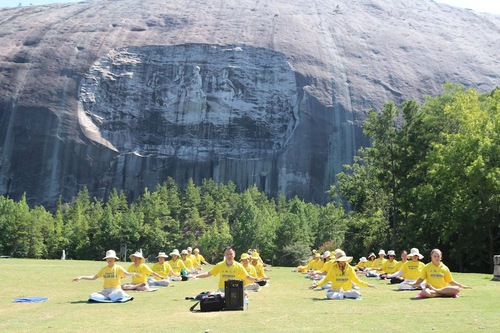 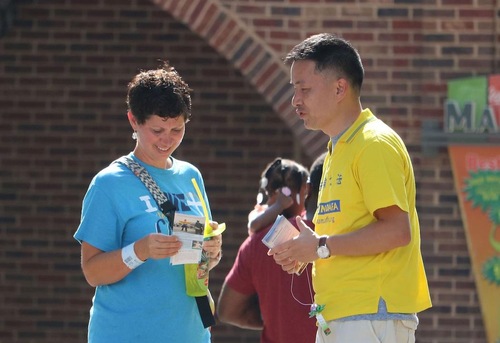 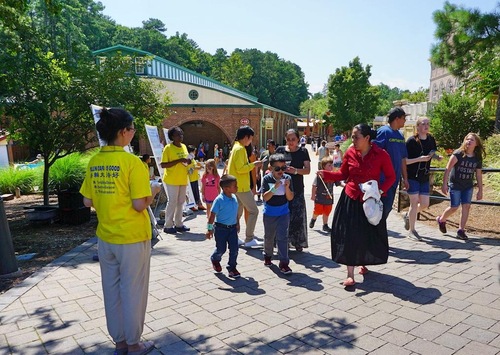 Practitioners talk to tourists about Falun Gong and the persecution 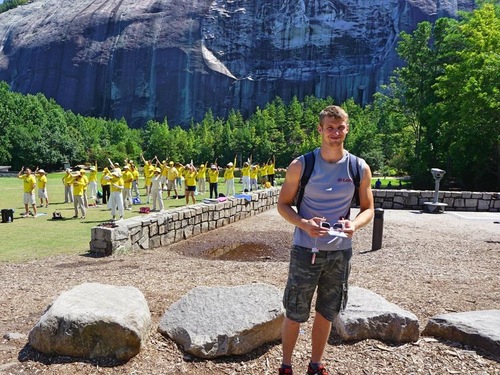 Nicolas from France watched the group exercises for a long time. “I feel peace and harmony watching them,” he said, “Every practitioner is peaceful. It is great. I don't understand why they are being persecuted in China.” 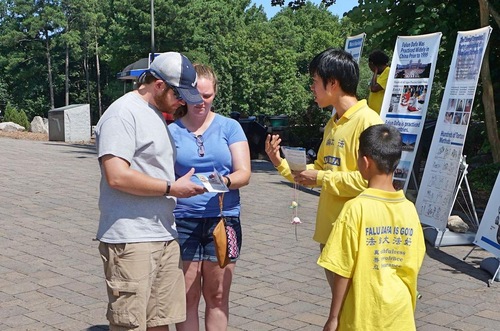 Jessica Morgan and Cliff Hatchur were visiting from elsewhere in Georgia. Jessica said, “Hearing about how Falun Gong practitioners are being persecuted in China right now, I feel sad. I didn’t know about this before.” 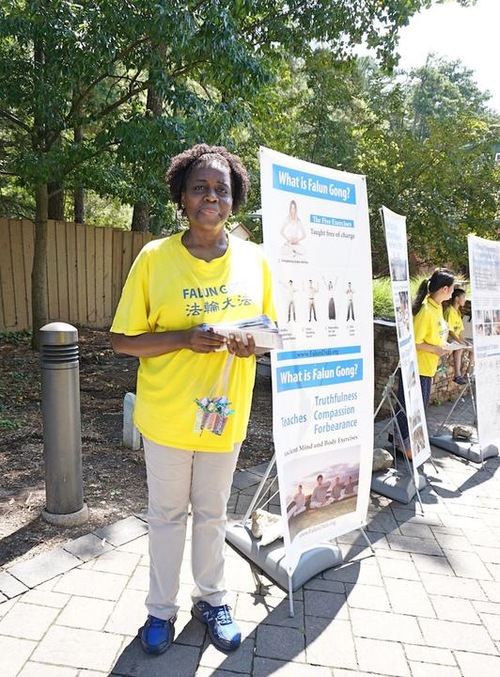 Dzifa Anoa comes to this tourist attraction once a week to tell people about Falun Gong. She believes that when people know the facts about the persecution, they will choose to support righteousness.

Practitioners in San Diego held an event on July 14 at the picturesque La Jolla Cove. Dozens of practitioners demonstrated the exercises, passed out flyers, and held a candlelight vigil to commemorate those who lost their lives in the persecution in China. 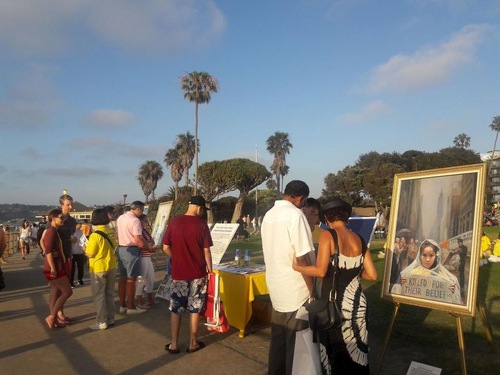 Beachgoers read about Falun Gong and the persecution 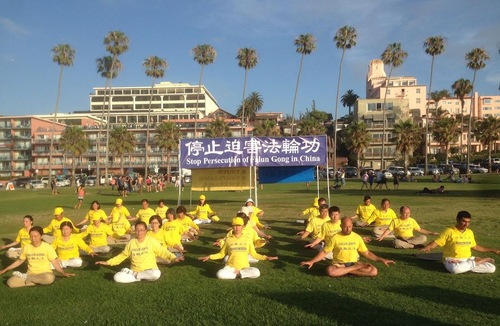 Ryan and Mia from Escondido were impressed by practitioners’ peaceful efforts to counter the persecution. Ryan said, “What moved me is that they haven’t lost their spirit because of their suffering. They’re not showing pain but rather compassion, and this is what drives them to take action.” 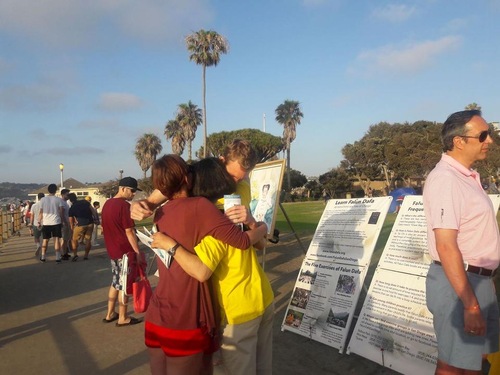 Ryan and Mia thank a practitioner for their efforts. 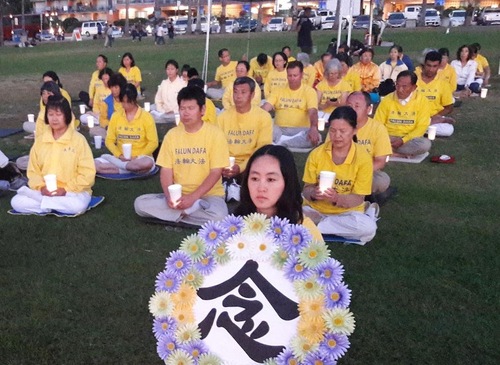 Practitioners in Florida held a candlelight vigil at Lake Eola Park in Orlando on July 20. 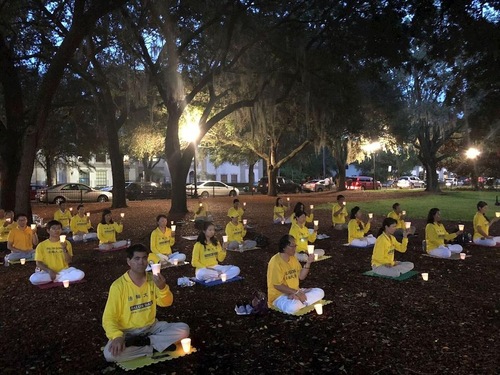 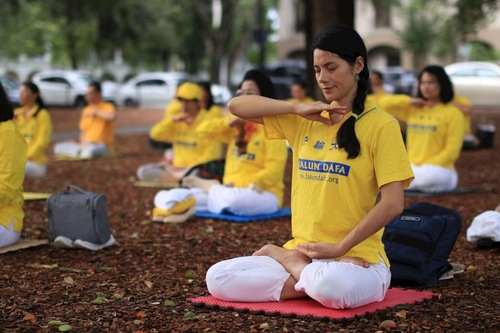 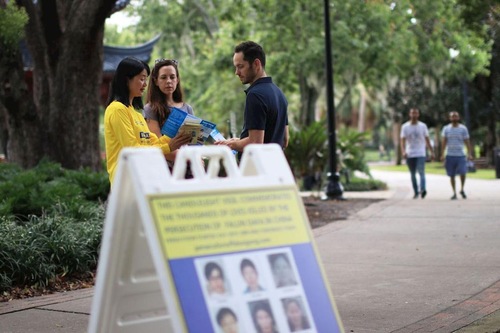 Practitioners talk to the public about the persecution

A memorial rally in Edmonton was held in Chinatown on July 21. The spokesperson of the local Falun Dafa Association briefly reviewed the history of the persecution. She said that more than 4,000 practitioners have been confirmed to have died as a result of the persecution and that the real number may be much higher. 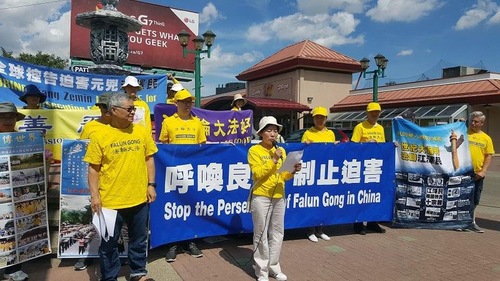 The spokesperson of the local Falun Dafa Association speaks at the rally. 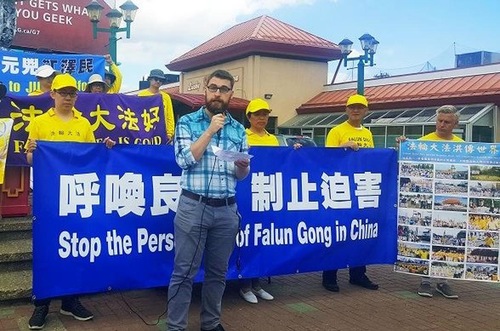 A representative of Garnett Genuis, Member of Parliament, speaks at the rally 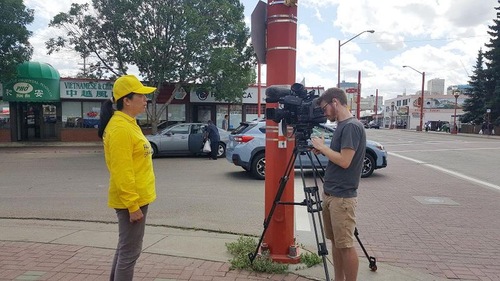 Ms. Liu, a Falun Gong practitioner, was interviewed by Global TV. She told the reporter that despite the severe persecution, more and more Chinese people have recognized the evil nature of the Communist Party and learned the facts about Falun Gong.