(Minghui.org) I was involved in a serious accident on my way back from a business trip to the provincial capital in September 1995. I sustained compound fractures of my femur, tibia, and fibula. I had to have surgery to have a metal plate installed on my femur. The steel plate broke after a year, while I was still in rehab. I had to have another surgery to have the broken plate removed. The surgeon drilled a hole in the top of my femur and placed a stainless steel intra-medullary fixation pin inside my femur to facilitate recovery and rehab. It is customary to have the pin removed after the bone has healed.

I started to practice Falun Dafa in July 1997. I practiced the exercises and studied the Fa and was able to walk without a crutch by November 1997.

Twenty years passed and I had not considered having the pin removed. I believed that the power of Dafa would remove it.

I could not bend my right leg, which prevented me from crossing my legs as we should to do the sitting exercise. How could I not cross my legs? I often stood before Master's photo and asked for his help. I said, “I will cross my legs completely no matter how much I suffer.”

Then I noticed that the head of the steel pin had emerged from the lower side of my knee, passing through bottom of my femur during the fall of 2017. I knew that the power of Dafa was at work. 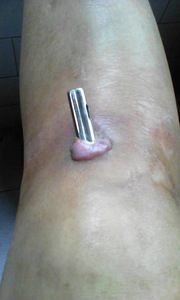 0.9 cm in diameter and 40cm in length, the stainless steel intra-medullary fixation pin emerged from below the knee for about 2 cm (Photo taken on April 25, 2018) 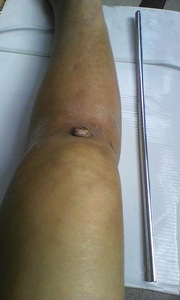 The steel pin protruded 2 cm by April 2018. My human notions emerged, so I tried to pull it out. I wanted to get it over with quickly, but every time I tried, I was in great pain for some time. I realized that this happened because my faith in the Fa and Master, the founder of Falun Dafa, was not strong enough. I told myself that I must trust Master and the Fa 100 percent and follow Master's arrangement. I no longer tried to pull it out.

On the evening of May 30, 2018, when I cleaned the area around the pin head with a towel, it felt as if it was a bit lose. I thought maybe Master was giving me a hint to pull it out. As I pulled on it, I felt a stabbing pain that disappeared immediately. It was unlike the pain I felt before, which had lasted about three days.

I held the head of the pin in my fingers and asked Master to strengthen me. Then, little by little I pulled the pin out. It was as if the pin was covered with oil as it slid out. In less than 10 minutes, this 40 cm long, 0.9cm diameter pin that had been installed in my body 22 years ago, was pulled out without any pain. There was not a tiny trace of blood at the hole, and the pin was clean, too. The hole closed by the next morning

I told the practitioners in my Fa study group about this. Everyone was excited and grateful. We bought fresh flowers, placed them before Master's picture, bowed and thanked Master.

Although I still cannot bend my right leg, I can walk with fast and light steps. I am certain that Master will strengthen me and I will be able to do the sitting meditation with both legs crossed in the full lotus position.

“Extraordinary Event in My Cornfield”