(Minghui.org) Outside of the parliament buildings in Warsaw, Poland on July 19, politicians and locals voiced their support for ending the persecution of Falun Gong in China. 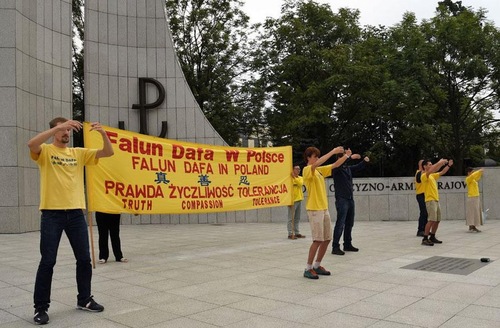 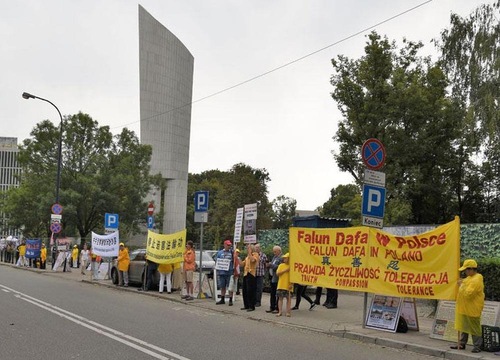 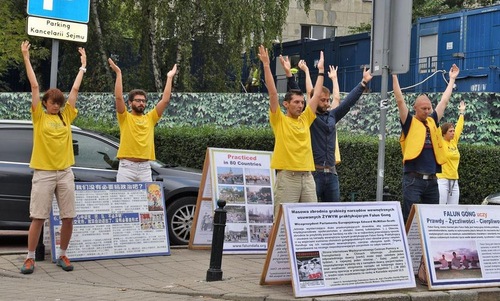 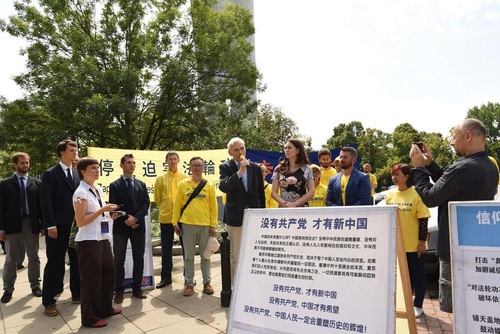 Falun Gong practitioners held a rally in front of the parliament buildings in Warsaw, Poland. 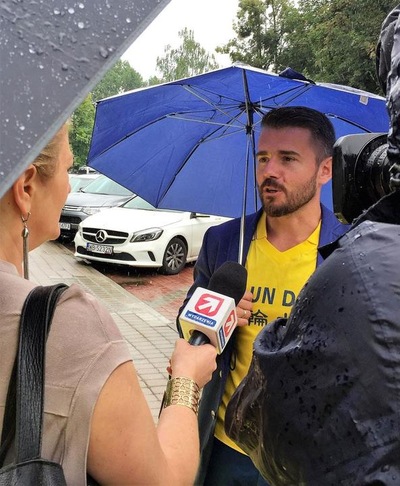 Polsat, a major television channel in Poland, interviewed a Falun Gong practitioner at the event.

Mr. Kowalski, a representative from the Poland Falun Dafa Association (also known as Falun Gong), provided the background of the rally, “July 20 is the day that the persecution of Falun Gong in China reaches 19 years. We are here to raise awareness of the human rights violations in China and the crimes of killing Falun Gong practitioners for their organs.”

He said that the number of Falun Gong practitioners reached 100 million in the 1990s. This number surpassed the number of Chinese Communist Party (CCP) members. This triggered the brutal crackdown in 1999.

Mr. Kowalski urged the Polish Parliament to pass a similar resolution as that passed by the European Union, condemning the organ harvesting of Falun Gong practitioners. 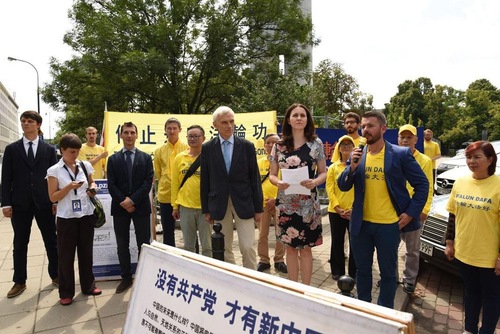 Mr. Kowalski, a representative from the Poland Falun Dafa Association, spoke at the rally

Member of Parliament: Thank You and We Support You

Member of Parliament Ms. Kornelia Wroblewsk walked out of the parliament building and joined Falun Gong practitioners. She stated, “The Chinese Communist Party launched such a brutal and horrific persecution at all costs that involves kidnapping, tortures, and murders of over 100 million Falun Gong practitioner citizens because of its fear. It was afraid to lose power. It feared that citizens would have freedom. The crimes beyond the limits of humanity prove that the Chinese Communist Party had extreme fear of Falun Gong.”

“Falun Gong practitioners, whether in China or in Poland, are respectful because you safeguard the truth, freedom, and honor with your lives. Thank you, and we support you!” 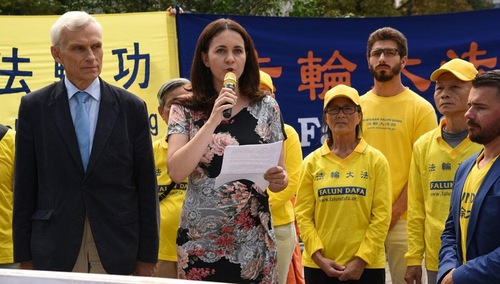 Member of Parliament and former Warsaw Mayor Mr. Marcin Swiecicki said that Falun Gong is peaceful, popular, and harmless. He condemned the crimes of organ harvesting and urged the Polish government to follow up on the 2013 European Union resolution to help end the persecution and organ harvesting.

Many locals and passersby took photos of the event and asked for fliers to learn more about Falun Gong. Some gave Falun Gong practitioners a thumbs up, “Keep up the good work! Good luck.” 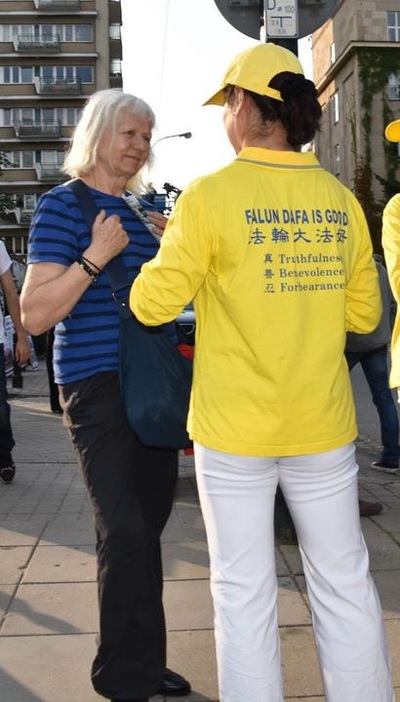 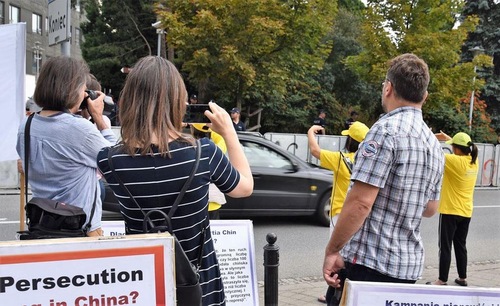 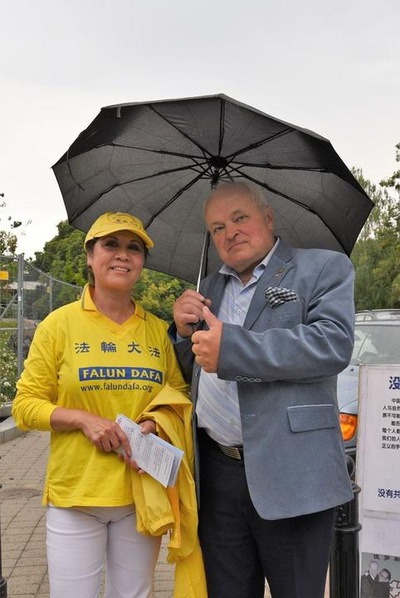 Mr. Czeslaw learned about the organ harvesting in China. He didn't think it was true when he first heard of it. After reading the exhibit boards, he came to conclusion that it was real. He said, “You are doing great! This is very important. Thank you.” 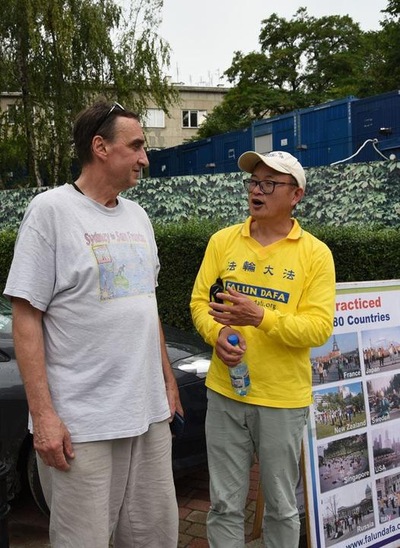 Mr. Karrol Grabski called the principles of Truthfulness-Compassion-Forbearance “universal values.” He said he took many pictures and would post them online and help spread the information. 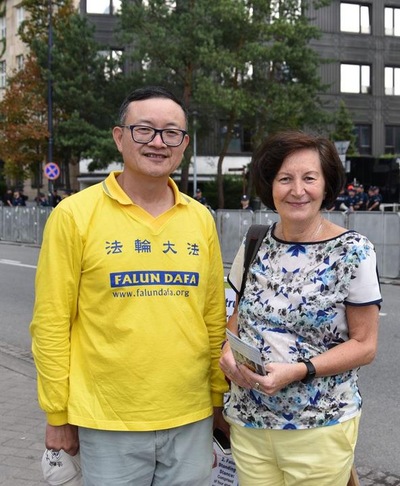 “Falun Dafa at the Dragon Festival in Minnesota”