(Minghui.org) Falun Gong practitioners in South Korea held a series of events in Seoul on July 20 to raise awareness of the persecution in China. On the same day 19 years ago, the Chinese communist regime launched a brutal suppression of Falun Gong that involved continuous slander from the national propaganda machine and a new security agency dedicated to executing the persecution: the 610 Office.

“Former head of the Chinese Communist Party Jiang Zemin claimed that he would eradicate Falun Gong in three months when the persecution began in 1999. He ordered the 610 Office to 'destroy Falun Gong practitioners financially, ruin their reputations, and eliminate them physically,'” stated Wu Shilie, spokesperson for the Korean Falun Dafa Association.

“The persecution has resulted in about 4,000 confirmed deaths. The Chinese communist regime has even killed Falun Gong practitioners for their organs for profit – an unprecedented evil on this planet,” he continued. “Despite of the lies of the nationwide propaganda to justify the persecution, Falun Gong practitioners have not been deterred. Falun Gong has spread to over 100 countries and areas around the world and provides hope to all.” 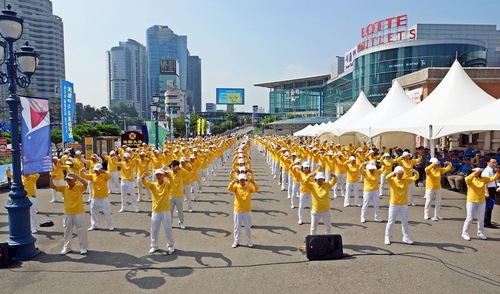 Practitioners in Seoul demonstrate the Falun Gong exercises on the morning of July 20, as the first of a series of events throughout the day. 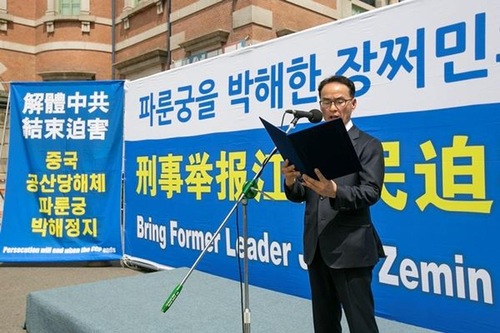 Wu Shilie, Spokesperson for the Korean Falun Dafa Association, speaks at the rally. 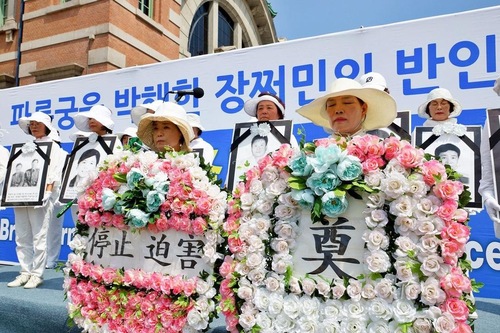 Falun Gong practitioners commemorate those who lost their lives in the persecution.

An exercise demonstration, a rally, a march, a candlelight vigil, and a “Human Rights Film Festival” composed the day's activities. The march route spanned over 3.8 kilometers (about 2.5 miles) and passed through major areas of the city including the Seoul Station, Namdaemun, Myeongdong, and City Hall. 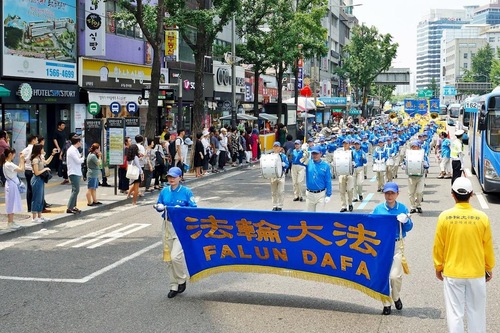 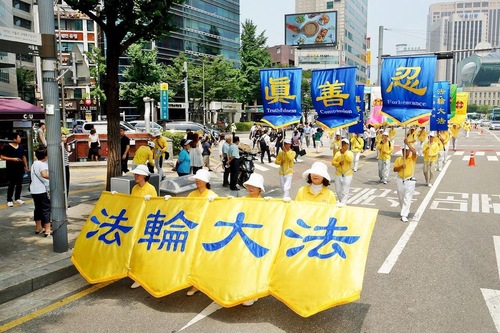 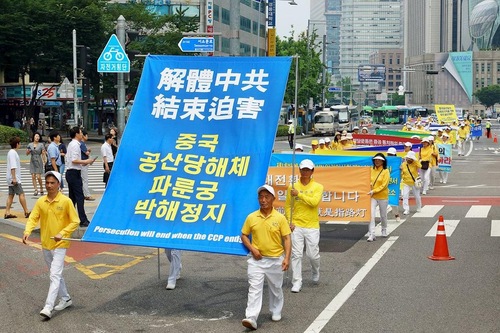 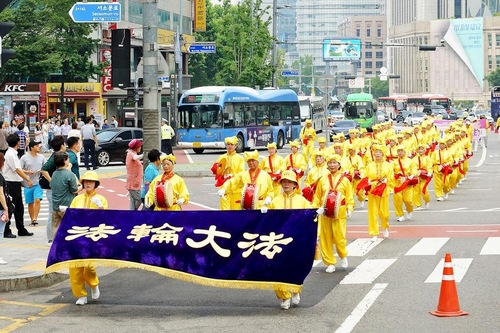 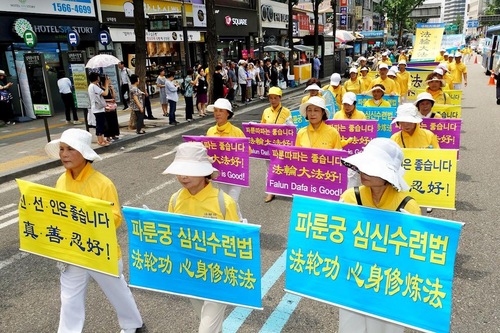 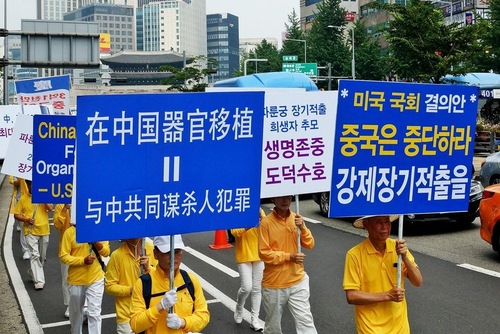 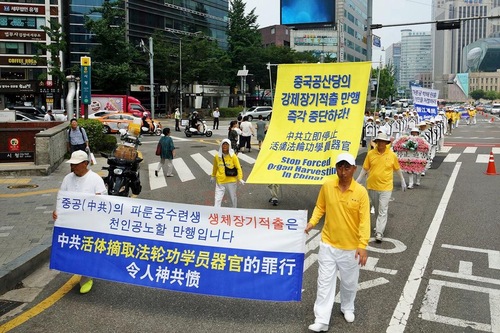 Falun Gong practitioners march through the center of Seoul on July 20, 2018.

Chinese Spectator: Falun Gong Is the Only Hope

Wang Rui, a tourist from mainland China, said, “The media is full of lies under the communist rule in China. People don't have freedom of belief. The Buddhist and Taoist temples are supposed to be quiet places for cultivation, but have turned into money-making venues. Chinese society is rotten at its roots. If people don't have belief, they don't have hope.

“Only Mr. Li Hongzhi (founder of Falun Gong) can help people be good from inside out. Falun Gong is the only hope and Mr. Li Hongzhi is the savior of mankind,” said Mr. Wang. He shared that he came to this conclusion upon following the Falun Gong issue since the persecution began.

Chen Jie and Zhang Jie are Chinese students studying in Korea. They were surprised to see the march. “We cannot see this in China,” they said. They also quit the communist organizations that they had previously joined.

“My father is still practicing Falun Gong. He hasn't wavered his belief. If only he could be here to see the march with his own eyes!” said a tourist from Henan Province. He teared up as he watched the march.

He continued, “My father is a very good man. The police came to our home to take him away many times because of his belief. I lived in fear; I didn't know if I would lose my father again one day. Our neighbors didn't know the facts of the persecution due to the lies of the [government] propaganda. They were cold to us.”

Seoul citizen Park Longhai observed the march and read the banners. He remarked, “Killing people for their organs is an unpardonable crime. All who have committed this should be held accountable.” He said he hoped that the atrocities would end soon. He also noted that despite of the brutal persecution, the procession was “peaceful, calm, and moving.”

Businessman Zhao Chengji often travels between China and Korea. He said he knew about the persecution in China and he feels that holding similar events across the globe will help end the persecution. “Those in today's activities are remarkable!” he exclaimed. 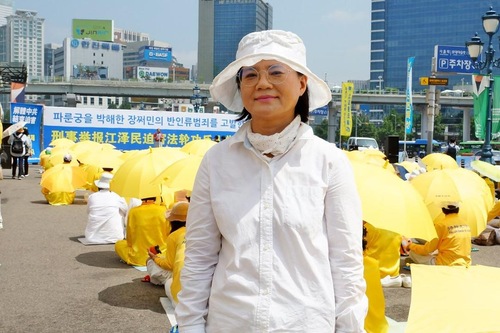 Kim Xianzhen, a Falun Gong practitioner from Busan, took part in the activities to raise awareness of the persecution and to help end it soon. 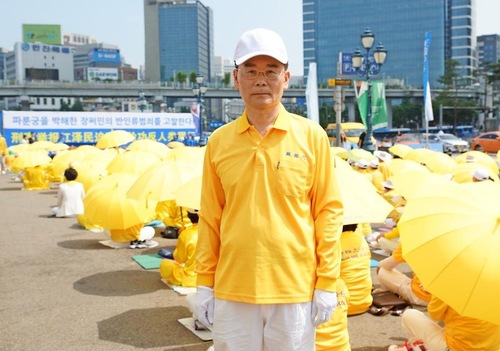 Park Junhuan works at the Korea Legal Aid Corporation. He started practicing Falun Gong in August 1999. “I took part in today's events with a heavy heart. The persecution has been going on for the past 19 years. I hope that all kindhearted people in the world can work together to end the persecution.” 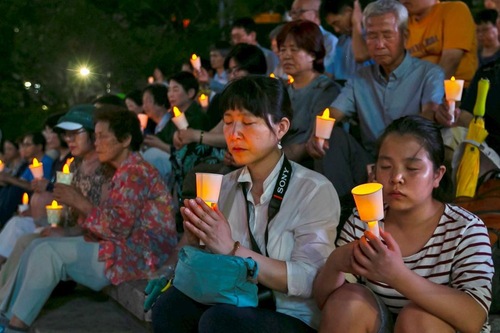 A candlelight vigil on the night of July 20, 2018 mourns those killed in the persecution.

The film festival presented a compelling movie about the persecution of Falun Gong, “Transcending Fear.”