(Minghui.org) Several thousand Falun Gong practitioners formed a Falun emblem at the Washington Monument on June 22. The Falun (Law Wheel) is the emblem of Falun Gong (also known as Falun Dafa). The yellows, blues, whites, and reds in the Falun emblem were a pleasing contrast to the green landscape surrounding the monument.

The practitioners hailed from many countries and areas, including Hong Kong, Macao, Taiwan, Vietnam, Canada, France, Germany, Ukraine, Mexico, Finland, and the United States. They shared their experiences of benefiting from practicing Falun Gong. 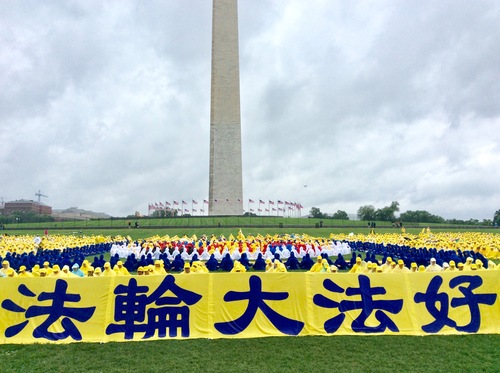 Life on the Right Track after Taking Up Falun Gong

Matthieu Fouassier is a veteran. He came from Paris to participate in the event. He said, “It's very meaningful to join the activities. Today's event is large scale. People may be curious about it and they may start their cultivation this way.”

Mr. Fouassier took up cultivation accidentally: “I was attacked in 2013. Someone hit the bone around my left eye. The doctor told me to rest for a month and return to the hospital for an operation if my situation didn't improve. I thought, 'This happened to me because I often drank.' I wondered how I could be a better person. I didn't want to have surgery, so I thought maybe Falun Gong could help me.”

He had a copy of Zhuan Falun that a Falun Gong practitioner had given him in 2012. When he returned to the doctor, he was told that he had fully recovered. He didn't drink or play video games as much and was alcohol-free in four months.

Chris Yophe Flechard is a pastry chef from France. “This is a great gathering. We do the same things together each year. We have the same belief. This is also for Americans to learn the truth.”

Mr. Flechard began to cultivate in 2009. He attended a workshop in Norway and saw a Falun Gong exercise demonstration. “I felt very strong energy when I learned the exercises and had a very wonderful feeling. I decided to start practicing Falun Gong. Everything has changed since I took up the practice 9 years ago. I no longer kill time at parties and drinking. My life goals are different now.” 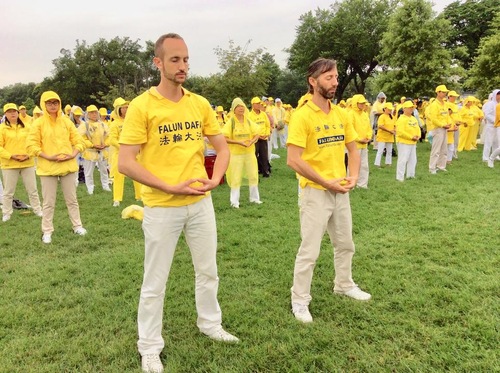 Fabian is from Germany. He said, “I have cultivated Falun Gong for over a year. I had a lot of frustrations in my life, so I asked people online: 'What should I do?' Some recommended different ways. One introduced Falun Gong to me. I started my research and realized that Falun Gong is good, so I began my cultivation. I have benefited a lot. I have understood that what goes around comes around. I have new standards in my life.”

Ilmari Nfvasmaa is an osteopathist from Finland. “I have cultivated for three years. I had some issues with my study and family. After practicing Falun Gong, I study harder and see fewer and fewer conflicts with my parents. My family lives in harmony.”

Jackson is from Canada. He is a producer at a media company. “I'm very touched by today's event. The weather is not nice, with pouring rain in fact. Practitioners are all persevering. I can sense their genuine hearts shining like gold. I had been searching for a spiritual belief prior to practicing Falun Gong. A Falun Gong practitioner was promoting the practice in my community in 1998. I saw that they were so peaceful. They stood out. I joined the practice. I have benefited a lot from it: my body and my family. I have found the meaning of life.”

Zhou Minghui, a psychologist from Taiwan, has cultivated for 14 years. “I have a happy life and have experienced miraculous changes in my body. I was a student leader and excelled academically, but I wasn't happy. I got insomnia during my studies at medical school. I came across Falun Gong on campus. The insomnia left me for good since day one.”

He added that his family also benefited from his practice, “My professional knowledge tells me that all couples argue with each other. Falun Gong cultivation teaches me to search inward, to be considerate of others. When my wife is busy, I think about what I can do for her even though I'm very busy myself. This is the key for a happy family. This is a great change in my life.”

Clarifying the Truth and Resisting the Persecution

Mud from Canada shared, “I came to this event to inform people that Falun Gong cultivates Truthfulness-Compassion-Forbearance. Its health benefits are great. It also teaches us to search inward and be good people. The exercises are simple, but I can sense huge changes in myself.

“We have come to Washington DC to raise awareness of the persecution in China and to call for an end to the persecution, including killing practitioners on demand for their organs. I have cultivated for 10 years. I will never it give up. I have benefited so much from my cultivation. I will continue.”