(Minghui.org) Nearly 3,000 Falun Gong practitioners held a candlelight vigil in front of the Washington Monument on the evening of June 22, 2018, in memory of practitioners who have died in the Chinese Communist Party's (CCP) persecution of the spiritual and meditation practice. 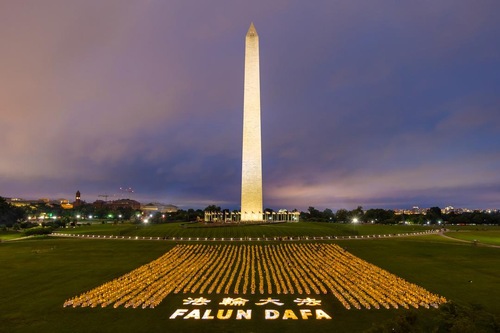 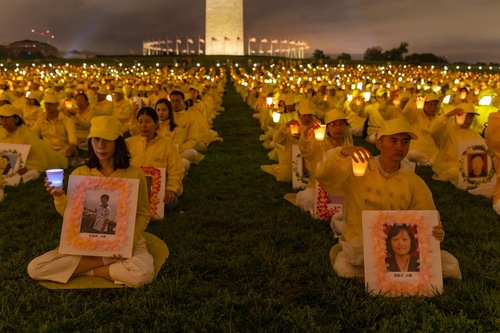 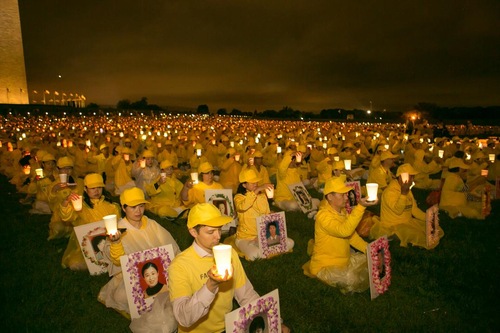 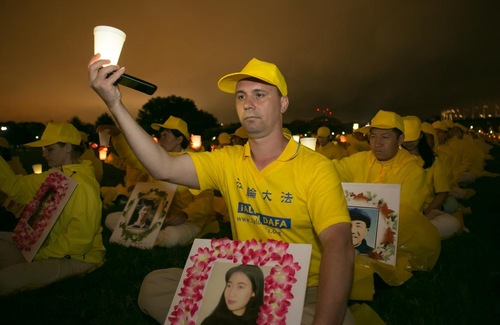 Candlelight vigil in front of the Washington Monument on June 22

Despite heavy rain during the day and more showers just before the event started, the vigil went on as scheduled in calm weather. 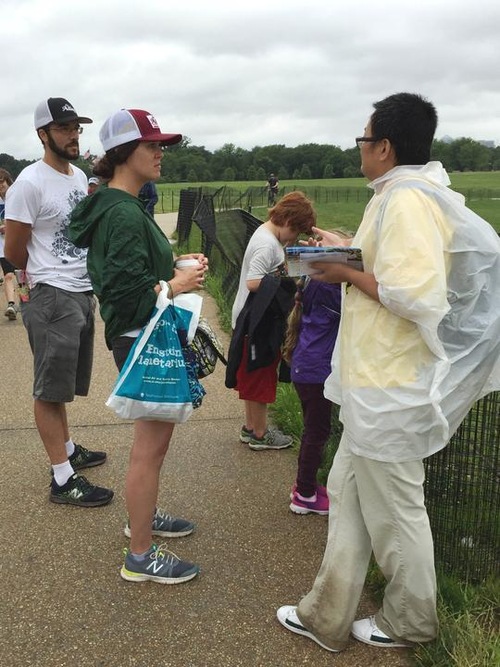 Sarah Bourne talks with a practitioner about Falun Gong.

Sarah Bourne from South Carolina said, “We need to commemorate those who were tortured to death or those who are forgotten... We should stand up and say, ‘This can't go on!’ I think this is absolutely noble and difficult. The persecution has lasted so long, and it is terrible. I think what you are doing is very, very important. I applaud your courage.” 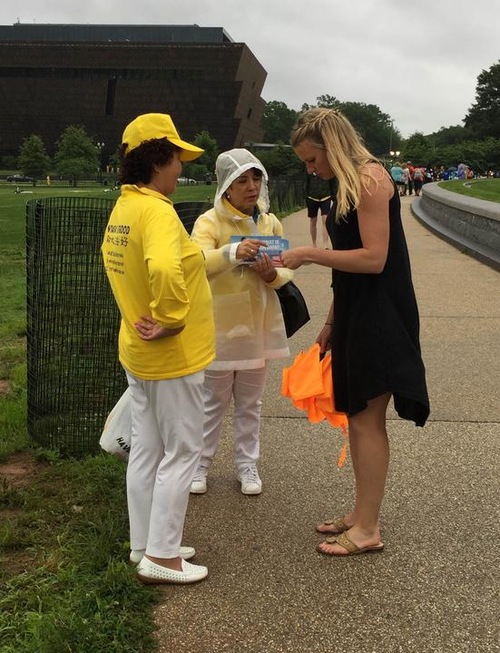 Hannah Pepper talks with a practitioner

“We live in the U.S. and can do what we want to do with these rights and freedoms. It is hard to imagine that other places are lagging far behind us. You come from many different countries, and you speak for your faith and fight for your rights. I think this is good,” said Hannah Pepper from Delaware. 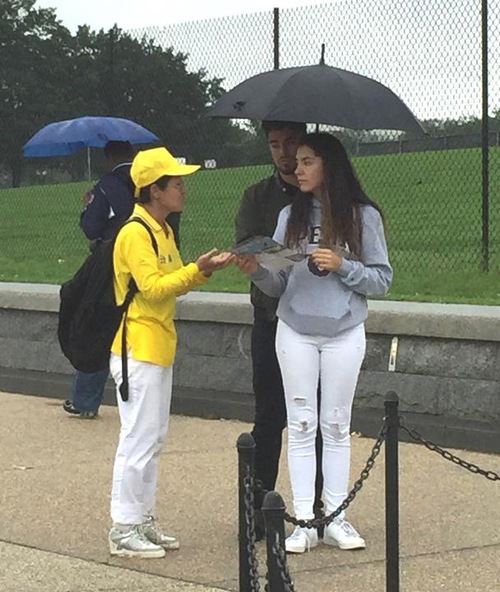 Camila Sarcone said that people should learn more about the persecution in China and help to stop it. 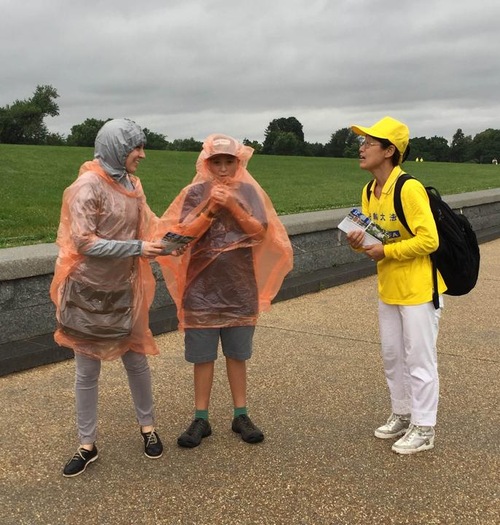 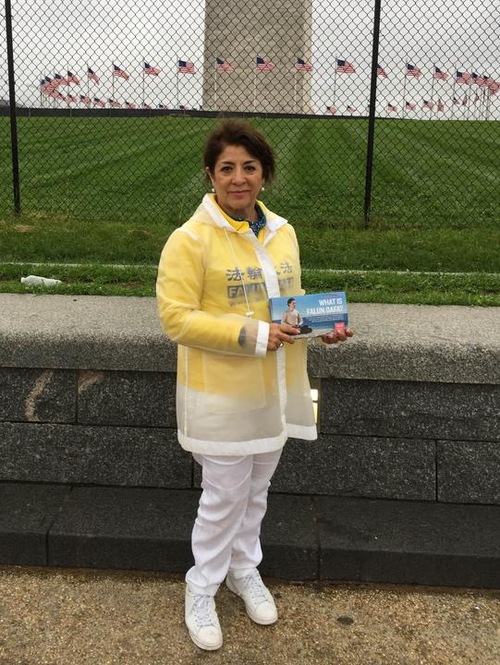 Rosario Gallardo, a practitioner from Mexico

Rosario Gallardo, a Falun Gong practitioner from Mexico, has practiced for nearly 12 years. This was her first time in Washington, D.C. She said, “I am very touched and moved deep down. In Mexico and the United States, people are free to practice, but many people in China are suffering from this cruel persecution and torture. They suffer there.”

She said of the vigil, “I think we are driving peace and helping all people in the world. This is very meaningful to me and everyone. I can see that many people are interested in Falun Gong. Some people asked me when the meditation would begin tonight, and they want to join us. I believe this event will attract many people and focus their attention on the persecution in China." 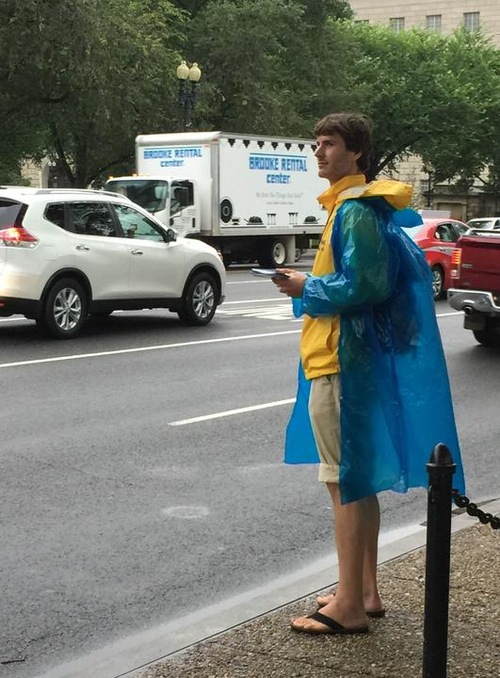 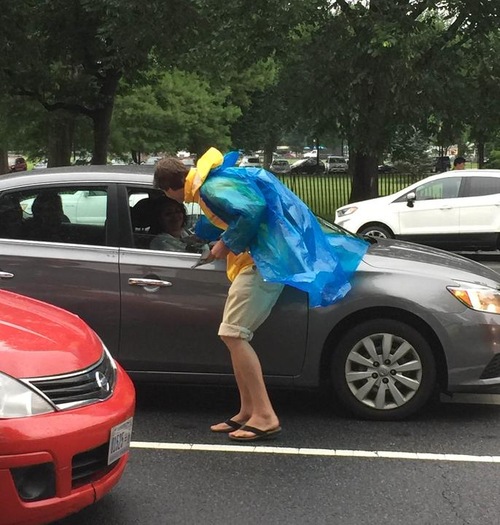 A driver rolls down her window and asks for a flyer.

Mathias Krenn is from Austria and has practiced Falun Gong for just six months. He distributed Falun Gong flyers along Constitution Avenue. “People should understand Falun Dafa, the persecution that happens in China, and what is happening here today. They’re curious. Some people open their windows, and they want to know what this is. The candlelight vigil tonight conveys a message of peace and goodness.”