(Minghui.org) Every summer, Minneapolis designates eight to ten Sundays as “Open Streets” festivals. Some of the main roads of the city are closed to car traffic, but open to the public to walk, ride bicycles, skate, and play. Local community groups and businesses hold booths and activities to promote healthy living and community interaction.

The Falun Dafa Association of Minnesota participated in all eight Open Streets festivals in 2017 and plans to participate in all of them this year as well. 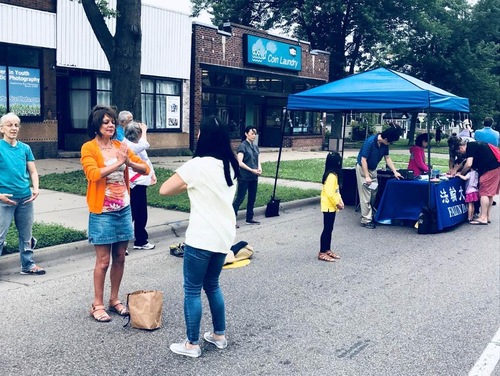 This summer, Falun Gong practitioners participated in the first Open Streets festival in Minneapolis on June 13, 2018. They demonstrated the exercises of Falun Gong (also known as Falun Dafa) and raised awareness about the persecution of this peaceful meditation in China.

Many local residents took an interest in the practice. Some learned the exercises from Falun Gong practitioners during the event.

A woman learned the second Falun Gong exercise, which is a standing meditation in which one holds the arms in various still positions for a period of time. Though holding the positions for several minutes is often difficult for newcomers, she managed to complete the full half-hour meditation. She said she felt strong energy and that the energy helped her to complete the exercise. She said she would definitely join the local practice site.

Falun Gong was first taught to the public in 1992. Nearly 100 million people across China were soon practicing Falun Gong after experiencing improvements in their health and moral character. Jiang Zemin, former head of the Chinese Communist Party (CCP), perceived the spiritual discipline's growing popularity as a threat to the CCP's atheistic ideology and issued an order to ban Falun Gong on July 20, 1999.Minghui.org has confirmed the deaths of thousands of Falun Gong practitioners in the persecution over the past 19 years; the actual number is suspected to be much higher. More have been imprisoned and tortured for their faith. Evidence shows that the CCP harvests organs from detained practitioners, who are killed in the process, to supply the organ transplantation industry.

“Lesson Displayed in a Dream: About Not Sending Forth Righteous Thoughts”