(Minghui.org) The documentary Human Harvest was shown on May 26, 2018, in Wallenberg Hall at the Östergötlands Museum, a landmark venue in the city of Linköping, the capital of Östergötland Province in Sweden.

The film was directed by Vancouver filmmaker Leon Lee, who received the prestigious Peabody award in 2015. Human Harvest (2014) follows the work of Canadian Nobel Peace Prize nominees David Matas and David Kilgour as they investigate allegations of state-sponsored forced organ harvesting from prisoners of conscience in China.

The report “Bloody Harvest/The Slaughter – An Update” (2016), authored by Kilgour, Matas, and investigative journalist Ethan Gutmann, confirmed that more than 1.5 million prisoners of conscience–primarily practitioners of the Falun Gong spiritual practice–may have been killed for their organs in Chinese state hospitals since 2000. The organs were advertised on the websites of Chinese medical institutions and sold to patients in need of transplant operations.

Ilias Kotsambouikidis, the moderator of the film screening in Linköping, said, “Our purpose is to raise the level of awareness. If people really know what is going on, they will not just stand aside.” Kotsambouikidis gave several examples relating to the revelations uncovered by Kilgour and Matas. Spain, Israel, and Taiwan have adopted new legislation prohibiting their citizens from traveling to China for organ transplants. Norway is also drafting a similar law.

The Human Harvest documentary was shown in the Swedish Parliament in 2016 with support from several Members of Parliament from various political parties, who also expressed willingness to work on legislation to counter illegal organ harvesting in China. Despite this progress, the facts about this genocide are not yet widely known or recognized in Sweden. 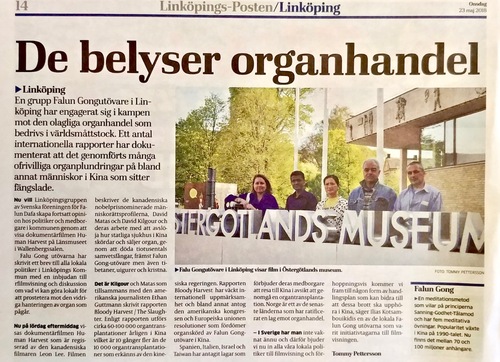 An article published by Linköpings-Posten on May 23, 2018, titled, “They expose trade with organs” invited readers in the Swedish city of Linköping to a screening of the documentary Human Harvest.

Kotsambouikidis wrote in a May 23 article published by Linköpings-Posten, a local weekly newspaper, “In Sweden, people have not yet woken up. We therefore invite all politicians to this documentary screening, hoping to come up with a plan to stop this abuse in China.”

The screening at the Linköping’s Östergötlands Museum was followed by a lively discussion, in which representatives of local political organizations, human rights activists, and regular citizens proposed ways to unite efforts and inform the local community about the organ harvesting crimes in China. Ideas including seminars, more film screenings, and approaching politicians at the municipal and provincial levels were discussed.

One woman suggested that the Human Harvest documentary be aired regularly on local and national television to remind people about what is going on in China today and awaken their conscience.

“Dafa Disciples Are Protected by Master”