“This Is What I Have Been Looking For!”

(Minghui.org) As athletes, sports fans, and reporters flocked to the Liebherr World Table Tennis Championship 2018 in the seaside city of Halmstad, Falun Gong practitioners held activities to raise awareness about the practice and the ongoing persecution in China.

On April 29, the day of the opening ceremony of the tournament, and the next day, the practitioners gathered in the busiest part of the downtown area. They put up display boards and demonstrated the exercises. Many people stopped to learn more and to sign a petition to help stop forced organ harvesting from imprisoned Falun Gong practitioners in China. 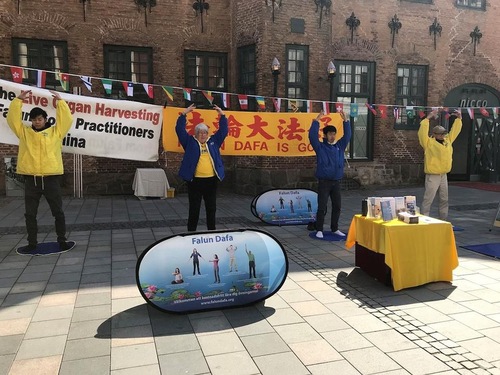 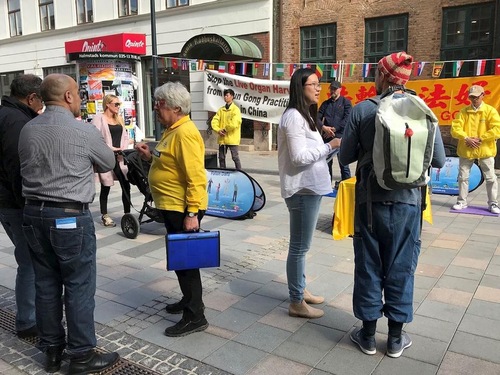 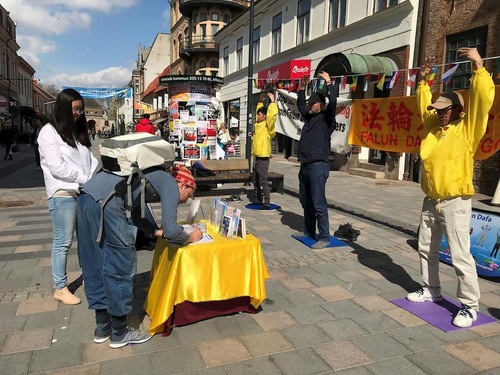 “This Is What I Have Been Looking For!”

A man in his 20s approached the practitioners and asked about the sitting meditation. A practitioner explained that Falun Gong wasn’t just about the exercises and has profound meanings in its teachings. The practitioners showed the young man the book Falun Gong and he began reading it. After a while he stopped and said that it was a very good book and bought a copy. He repeatedly told the practitioners, “This is what I have been looking for!”

Passersby Eager to Learn the Exercises

Some students stopped to watch the exercise demonstration and followed along with the movements. One of the students came back an hour later asking to learn the exercises.

The next day many new faces appeared at the local exercise site. Among them were two college students from Vietnam. They learned all five exercises before they left and asked to join the exercise session every Sunday.

Chinese Tourists Hear What They Can’t in China

Members of the Chinese delegates and tourists from China often quietly read the display information. Some stopped to learn the real story of how Falun Gong became targeted by the communist regime for persecution.