(Minghui.org) The 19th World Falun Dafa Day and the 26th anniversary of Falun Dafa's introduction in China by its founder Master Li Hongzhi fell on May 13, 2018, which was also Mr. Li’s 67th birthday.

Falun Dafa practitioners in Hong Kong celebrated this joyous occasion by holding a rally and a parade. They expressed their gratitude to Mr. Li while sharing the benefits of the practice and the universal values of its teachings – Truthfulness-Compassion-Forbearance. Civic leaders and political figures joined the rally and publicly acknowledged the contributions of the practice. 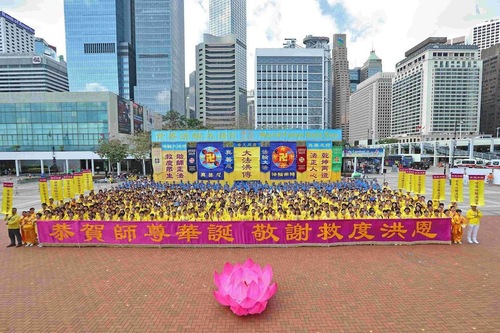 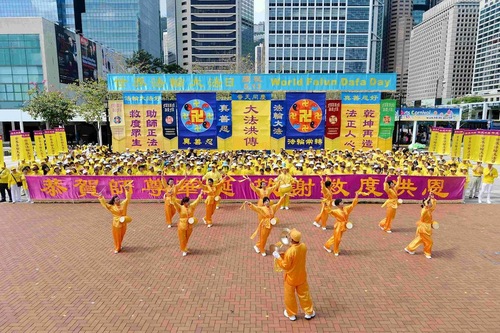 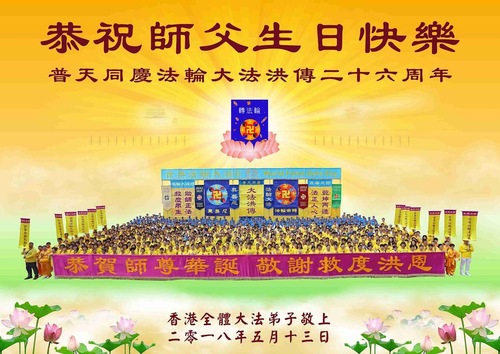 The rally in Edinburg Place began with practitioners demonstrating the Falun Gong exercises. It was followed by musical numbers performed by the Tian Guo Band and the waist drum troupe, as well as vocal performances to wish Master Li a happy birthday. 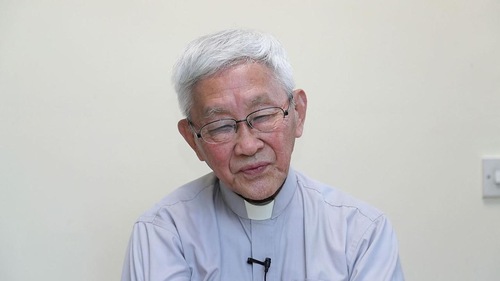 Retired Cardinal Joseph Zen Ze-kiun of the Catholic Church in Hong Kong praises the practitioners’ peaceful protest against the persecution.

Retired Cardinal Joseph Zen Ze-kiun of the Catholic Church in Hong Kong praised the health benefits of Falun Gong and expressed his dismay at the ongoing persecution of the practice in China. He noted that practitioners protest the persecution peacefully. “More and more people appreciate the positive influence of the practice on society,” he said.

Cardinal Zen wished the Falun Dafa Day activities much success and wished a happy birthday to Master Li: “We wish him good health and [that he may] continue to promote his teachings that benefit the society.” 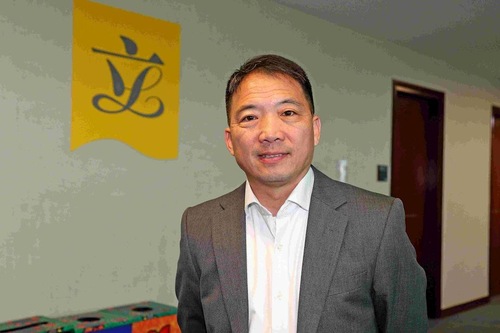 Wu Chi-wai, Legislative Councilor and Democratic Party chairman, praised the principles of Falun Gong. “Without Truthfulness, Compassion, and Forbearance, the Chinese race is no longer the prestigious race we once were familiar with,” he said. He added that, under the suppression of the current Chinese dictatorship, “The kind side of humanity is suppressed.” 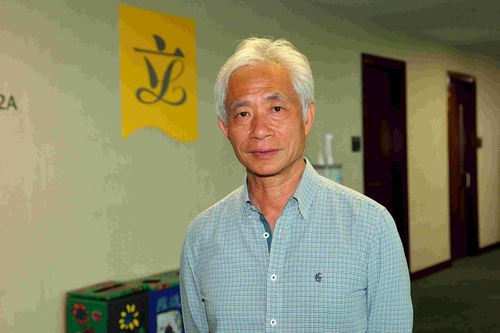 Legislator Leung Yiu-chun admired Falun Dafa practitioners’ steadfast belief despite the persecution. “I have seen many practitioners arrested, imprisoned, and even tortured. Yet they still uphold their faith. This is worthy of our respect.” 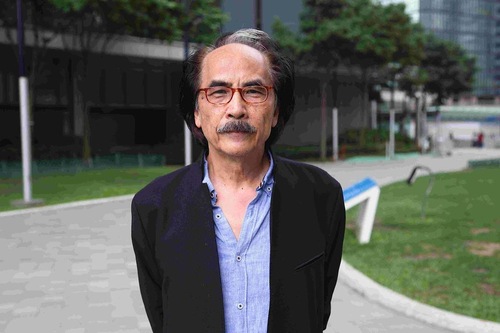 Simon Chu, former Director of the Government Records Service, expressed his respect for the practitioners and wished Master Li a happy birthday.

“I admire the practitioners’ courage in fighting for freedom, including freedom of religious belief. I hope we all can keep it up,” said Albert Ho Chun-yan, former legislator and former chairman of the Democratic Party.

Former legislator Leung Kwok-hung stressed that freedom of belief should be protected. “Many pro-communist organizations are ordered to or are given financial incentives to interfere with Falun Gong activities [outside of China]. This shouldn’t happen. Like other religious beliefs, I hope that the practitioners’ belief can be protected.”

Ms. Lan from Sichuan Province took part in the May 13 events with her four-year-old granddaughter. Ms. Lan has practiced Falun Gong since 1997 and her chronic health problems, including insomnia and hemorrhoids, disappeared afterward. Her mother, in-laws, children, and grandchild also became practitioners later on.

The parade set off from King’s Road Playground and ended at Sun Yat Sen Memorial Park. Three different themes were contained within the parade: The spread of Falun Dafa, the Peaceful Protest, and Quitting the Chinese Communist Party (CCP). The majestic Tian Guo Marching Band led the parade, followed by a beautiful float, practitioners dressed as celestial maidens, a large model of the book Zhuan Falun, an exercise demonstration, the waist drum troupe and a flag team. The parade drew the attention of many spectators. 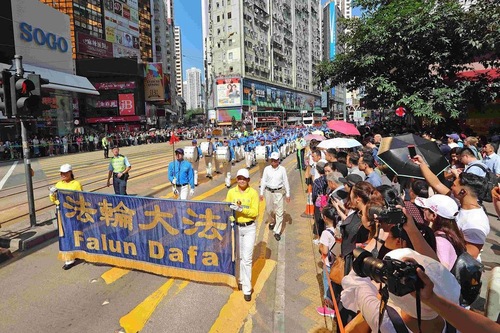 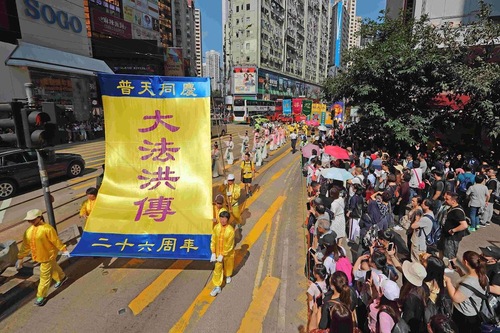 The section of the parade showcasing the spread of Falun Dafa 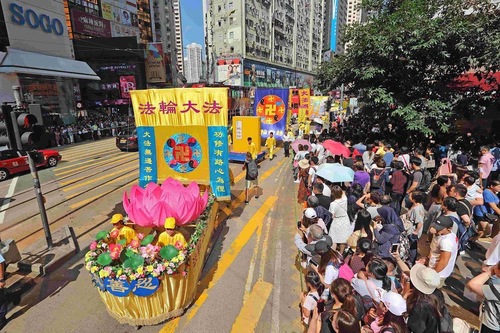 Ms. Li from China saw the Falun Gong parade for the first time. Amazed, she said, “Human nature is kind. I agree with the principle of Truthfulness, Compassion, Forbearance.”

Mr. Hu, a citizen of Hong Kong in his 70s, often comes out to watch Falun Gong’s parades. He said, “The practitioners must keep doing what they do. I respect and support them for having a sense of justice.”

Mr. Mai watched the parade with his three-year-old son. He was disturbed and concerned when he learned that living Dafa practitioners’ organs are systemically removed by the Chinese authorities for illegal organ transplants. “I can’t believe that it really happens; that’s horrible,” he said. 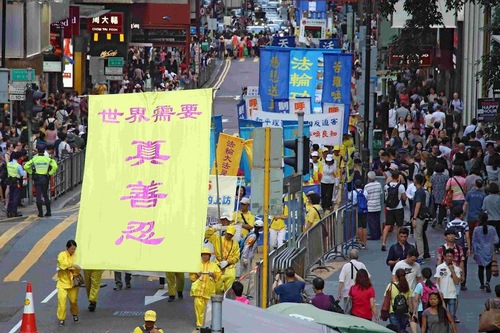 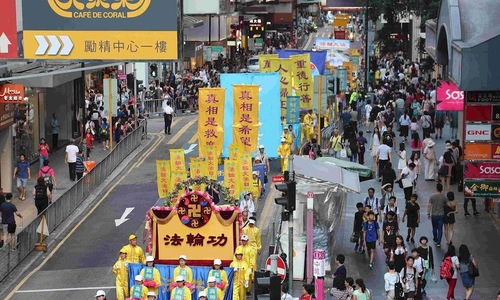 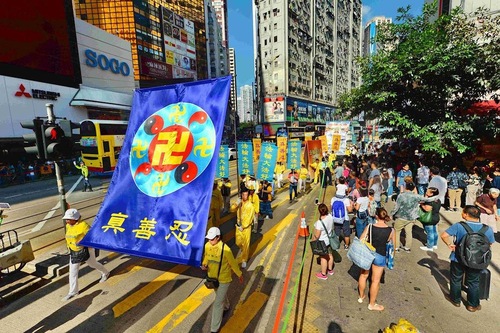 Another spectator, Mr. Wang, said that he supported Falun Gong. “We should look at the world from a different angle and not just listen to the CCP’s mouthpiece,” he said.

Ms. Zhang and her children, from China, were on vacation in Hong Kong. They were amazed by the size of the parade and noted that such a parade would not be allowed in China. She took many photos and said that she would show them to her family and friends when she got back to China.

Two young students from China stood watching the parade. One said, “I don’t understand why the authorities in China decided to persecute this group of wonderful people.” She asked for a copy of Falun Gong literature so that she could learn more about the practice.

Sam, from France, was visiting Hong Kong with two friends. He was shocked by the magnitude of the persecution and especially by the Chinese regime's crimes of forced organ harvesting from prisoners of conscience. “I can’t believe such an evil thing is taking place on Earth,” he said.

Sebastian from Austria searched for information about Falun Gong on his mobile phone as soon as he saw the parade. He remarked, “A dictatorship, in order to secure its reign, bans things that do not conform to its ideology. What does that say when it bans Truthfulness, Compassion, Forbearance?” 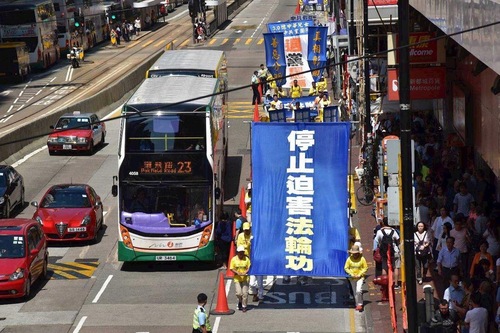 The parade calls for the end of the persecution in China. 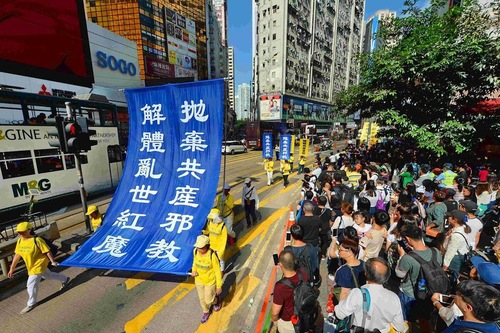 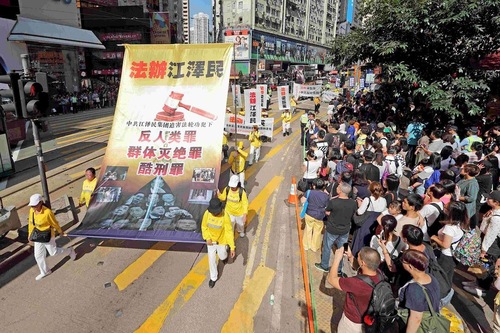 Bruce from New Zealand said that he has seen Falun Gong practitioners doing the exercises back home. “I think that Truthfulness, Compassion, Forbearance are good values,” he remarked.