(Minghui.org) Mr. Yang Licheng from Qiqihar City is in his seventies. He was illegally detained in the Fuyu Forced Labor Camp in 2000 and severely tortured. He was arrested again in 2009 and tortured by officers from the Tiefeng District Police Department.

The following is Mr. Yang’s narration of his persecution.

Police officers from the Xingongdi Police Station forced their way into my home and arrested me on June 5, 2009. They confiscated a thousand yuan in cash along with other personal belongings.

At the police station, I was cuffed to a heating pipe, so I could only lay on the concrete floor overnight. The next day, I was taken to the Tiefeng District Police Department and forced to sit on an icy-cold iron chair. A plastic bag was put over my head to suffocate me. 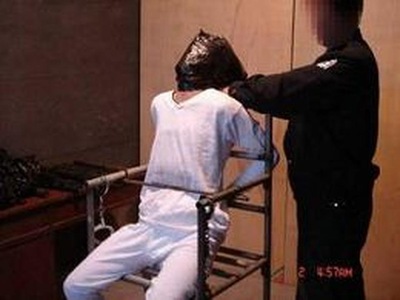 My arms were then pulled back through the holes on the back of the iron chair, and cuffed. Electrodes were attached to my thumbs and connected to a generator to shock me. I was shocked from 9:00 a.m. until after 5:00 p.m.

Some time later, a police officer took the electrodes off my right thumb and clipped it to my genitals. He then turned up the generator and shocked me for five or six more hours. My body kept twitching and my heart was in extreme pain. I felt like dying. 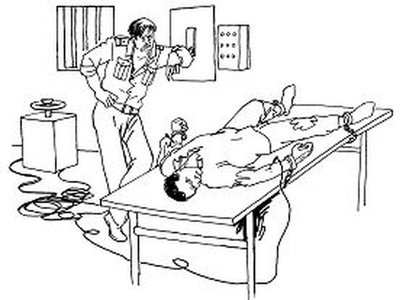 The officers forced me to stand up, then cuffed my hands behind my back through the two holes of the chair. They pushed my head forward and pulled my legs down.

One of the officers then suggested that they loop one end of my shoelaces over my head, and tie the other end to my feet. They tied my head to my feet, with my hands cuffed behind my back. An hour later, I had perspired so much that it formed a puddle on the floor.

The torture lasted for three days and nights. I was then transferred to the Qiqihar Detention Center, where the persecution continued. 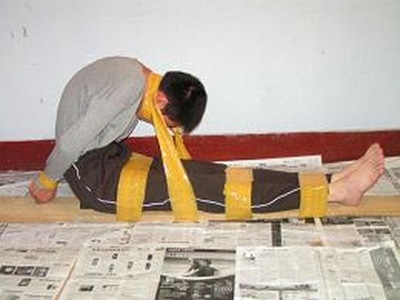 Torture reenactment: Tying the head to the feet

I was forced to pick up chopsticks in the detention center. I was later sentenced to four years in prison in December 2009 and taken to Tailai Prison in January 2010.

The prison guards in the group training team tried to force me to write a guarantee statement promising to stop practicing Falun Gong. When I refused to cooperate, they told me to crouch down as punishment. I also refused to do so, and was cuffed instead.

I could only sleep on my side that night because the bed was too crowded. I was taken to the “elderly” team and deprived of sleep for three days in a row. Four criminal inmates monitored me and poured cold water over my head immediately when I closed my eyes. I was later forced to pick up chopsticks and toothpicks, and clean the bathrooms.

I endured all sorts of inhumane tortures in Tailai Prison until January 7, 2013, when I was released.