(Minghui.org) Today's news from China includes incidents of persecution that took place in 7 cities or counties in 6 provinces. According to this report, 12 Falun Gong practitioners were subjected to mistreatment during their detention, and at least 2 were illegally arrested. 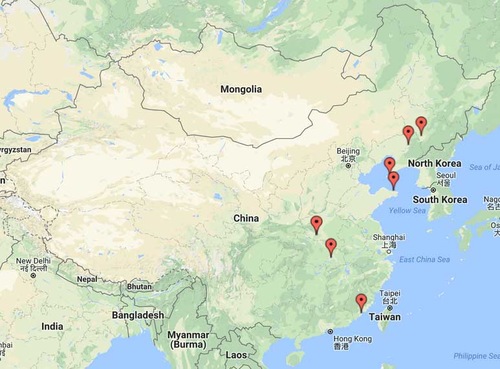 Ms. Xu Yanyun, 41, was arrested at her rented home on March 28, 2018 by officers from the Shuangdao Border Police Station. Her home was ransacked.

Ms. He Xiuli, from Suizhou City, Hubei Province, was arrested on September 14, 2017 in Tongbai County, Nanyang City, Henan Province. She has been held in the Nanyang City Detention Center. She was placed under strict supervision from September 15 to October 25, 2017, and again on December 27, 2017 to present. She went on a hunger strike between March 17 and March 19, 2018. She was abused, and her mouth was stuffed with a towel.

Ms. Liu Jinyu suffers from late stage colorectal cancer due to persecution in the Liaoning Province Women's Prison. Several major hospitals in Beijing, Shenyang, and Dalian were unable to treat her. She has become emaciated and remains in critical condition. She is currently on medical parole.

Ms. Liu Jinyu was arrested at home on April 21, 2016. She was tried on October 21, 2016 and sentenced to three years and three months in prison by the Development Zone Court. She was incarcerated on February 28, 2017.

Ms. Zhang Shiying, 70, and Ms. Du Xiulian, 61, from Wanghua District, were officially placed under arrest on October 20, 2017 by the Wanghua District Procuratorate. They were tried at the Nangou Detention Center on the morning of March 21, 2018. Both practitioners were handcuffed and shackled while walking into the courtroom.