(Minghui.org) Before the upcoming 26th anniversary of Falun Dafa's introduction to the public in China, practitioners in Ottawa held an experience-sharing conference on April 15, 2018. Eight practitioners presented speeches on their progress in cultivating and breaking through many of their notions and attachments. 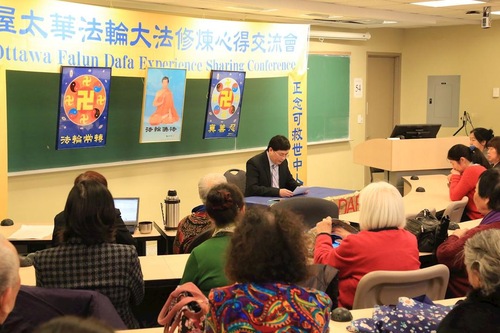 Mr. Li was a salesperson for The Epoch Times in the past year. His partner went on a long vacation and he had to shoulder the work alone. Through intensive Fa-study, he eliminated his attachment to comfort and dependency. He was able to better clarify the truth to his clients and as a result, he broke previous sales records after the first quarter this year.

Mr. Li said, “Once I let go of the old ways of doing things and tried to look at things from others’ perspectives, I was able to better handle many things.”

Master Arranges the Best for Us

Mr. Wang works for a software company and, through frequent challenges at work, he has improved his xinxing. As a result he has had more energy and time to spend on promoting Shen Yun and other Dafa projects.

“I went from being a workaholic to a regular worker; being overloaded with work to having little pressure, overrating my status to letting go of it, and yet my salary steadily increases, ” said Mr. Wang. Though it seemed like he was on a roller coaster ride in his work over the years, as long as he wasn’t trapped in the human notion of loss and gain, he found that Master had arranged the best outcome for him, he said.

Improving as an Editor

Ms. Chan was an editor for The English Epoch Times [EET]. She felt helpless when writing articles about ancient China’s divine culture. In the process of struggling to improve, she realized that the best way to write a good article was to develop compassion and be considerate of others.

Mr. Vaidyanath was also an editor for EET. He gradually learned that in clarifying the truth it was of utter importance to eliminate the Chinese Communist Party’s ideology from the person’s mind.

Ms. Yang suffered from her attachment to affection. She went from fighting and confronting to crying and tolerating. Eventually, she was able to let all things go and experience the beauty of rising above her emotions.

At work and in everyday activities Mr. Brauneisen was able to eliminate his attachments to self, reputation, showing off, jealousy, comfort, fighting and other negative thoughts.

One summer there was an intern at his workplace who was very professional. Mr. Brauneisen’s supervisor valued and praised the intern no matter what he did. Mr. Brauneisen was very jealous. A year after the intern left, the supervisors were still praising him. “Apparently I hadn’t completely eliminated my jealousy and that was why it was still coming up,” he said.

“Digging out hidden attachments is key to genuinely cultivating. Many hidden attachments are connected to one another like a spider web. They must be severed one by one before one can get rid of the stubborn web. Only when I conquer the tribulations and walk the path Master arranged for me would I be able to do it,” Mr. Brauneisen said.

Ms. He helped her mother, who just came to Canada from China, to return to the practice. After a year of practice her 76-year-old mother went from an emotional, sickly woman to an energy-filled, optimistic practitioner. Through clarifying the truth to her close family members, her daughter began to read Zhuan Falun and her husband's temper improved.

Forming an Environment of Looking Within

Ms. He has been working on forming an environment of looking within with her fellow practitioners. She helped other practitioners open up and share their difficulties in promoting Shen Yun. She also encouraged them to share their attachments and gaps, their suggestions and thoughts on improving as one body. Many times, the energy while practitioners shared their experiences was so strong it was as if Master was right next to them.

“Not acknowledging the old forces’ arrangements and saving people in the limited time we have is a battle between good and evil. Shen Yun, the major battlefield, is the most effective project that requires the local practitioners to be in their best cultivation state. The practitioners must have firm belief in the Fa and work well with one another. As to how to improve the work we do, looking within is still the magical tool,” Ms. He said.