(Minghui.org) Today's news from China includes incidents of persecution that took place in 17 cities or counties in 11 provinces. According to this report, 8 Falun Gong practitioners were subjected to mistreatment during their detention, and at least 12 were illegally arrested. 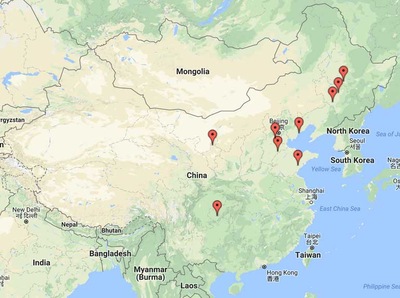 Ms. Wen Yulan and her sister were arrested by officers from the Baitaling Police Station between March 20 and March 22, 2018.

Mr. Yang Hongchen, from Fanjiatun Town, was released and returned home on March 17, 2018, after spending two-and-a-half-years (of a three year sentence) in prison. His wife, Ms. Guo Yafen, remains in prison.

Mr. Lu Shubin was mistreated in the Hulan Prison. It was reported he suffers from femoral head necrosis. He has hardly eaten anything for over two months.

Ms. Zhang Daixue, a retired teacher, from Shapingba District, was arrested on the train and taken to the Railway Police Station on the afternoon of March 22, 2018. The police went to her home and ransacked it. They confiscated personal belongings and printed Dafa materials.

Ms. Jiao Yingtao was reported for using money with Falun Gong information printed on the bills when shopping in mid-October 2017. Three people broke into her daughter's home and ransacked it on the evening of October 16, 2017. They confiscated DVDs and Falun Dafa charms.

Ms. Jiao was taken into custody the next day for one day. During that time, she was questioned, and her statement was recorded and signed. She was photographed and fingerprinted. Ms. Jiao was then taken to a detention center for seven days of detention; however, the detention center refused to admit her, and she returned home that evening.

Officers from the Duqiao Town Police Station, as instructed by the Jing County Domestic Security Division, went to Ms. Wang Xiuying's home in Suzhuang Village and arrested her on March 26, 2018. Ms. Wang was taken to the police station, where she was photographed and forced to give her fingerprints and blood samples. She was released that day.

Ms. Wang Yun, in her 70s, from Fangguan Town, was arrested by officers from the Fangguan Town Police Station and the Gaobeidian City Domestic Security Division on March 26, 2018. The officers ransacked her home and confiscated a printer and other things. Ms. Wang is being held at a detention center.

Ms. Lu Junxia was detained for five days. She has returned home.

Mr. Zhao works in Ji'nan City, Shandong Province. He was arrested at his rental place at around 6 a.m. on July 15, 2016, by a group of agents from Bengbu City Domestic Security Office and officers from Nancun Police Station in Ji'nan.

His wife was not home at the time, yet the police took him away without any consideration for his six-year-old child at home.

The police targeted Mr. Zhao after he was reported for producing and distributing Falun Gong informational materials. They took him to Bengbu City for detention, though they later released him on bail.

Ms. Xu, 72, was arrested on August 4, 2017 for talking to people about Falun Gong. She was sentenced to four years in prison on December 27. She filed an appeal, but the higher court upheld her sentence without holding an open hearing as required by law.

Ms. Zhang Libin has been detained for five months. She is being held at Chaoyang Detention Center. Her health situation is very bad. The procuratorate sent her case to the court on March 21, 2018.

Ms. Jin Zhimei, from Kunming, was tried by Chuxiong City Court on the afternoon of March 22, 2018. The prosecutor suggested a sentence of three years or less. Their argument was that she gave two DVDs about Falun Gong to passersby on July 18, 2017, and that the police found 76 copies of DVDs about Falun Gong and some paper money with information about Falun Gong on them in her bag.

The court said the sentence would be announced on another day.

Ms. Zhao's lawyer plead not guilty and presented her defense. The judge was more friendly than in the previous trials, claiming that they had just followed orders from the 610 Office.

Ms. Yi was arrested while she did the Falun Gong exercises in front of her house on April 18, 2017, and then the police searched her home. Ms. Yi was released after her family paid the requested sum of money and used their jobs as guarantee.

The police went to her home and harassed her a couple of times on September 12, 2017. The procuratorate issued a subpoena to her on March 5, 2018, saying she would face trial.

The police broke into the apartment of Mr. Ding Zhongbin and his wife, Ms. Yi Wenjun, on the afternoon of February 12, 2018. The couple was taken to the police station and interrogated until the next day, when they were transferred to Chengdu City Detention Center.

Ms. Sun Jifen, 70, didn’t return home on March 19, 2018. The next day, her family learned from Baitaling Police Station that she would be detained for ten days.

Ms. Sun pasted Falun Gong informational posters near Qinhuangdao Campus of Dongbei University on the night of March 19, 2018. A woman reported her to the campus guard, who then reported Ms. Sun to police. Ms. Sun was taken to Baitaling Police Station.

Mr. Li Dang was arrested at home on the night of March 30, 2018, and was detained at Hulian District Detention Center.

Hulian District Court tried Mr. Li on December 1, 2016. The only evidence presented was his complaint letter against Jiang Zemin, former Chinese President. No verdict was given until March 26, 2018.