(Minghui.org) Patient Medical Journal, a publication from the Finnish Medical Association, carried an article on February 7 with a title of “Where Do the Organs for Transplants in China Come From?” It discussed the concerns raised in medical publications over the organ transplantation ethics in China. 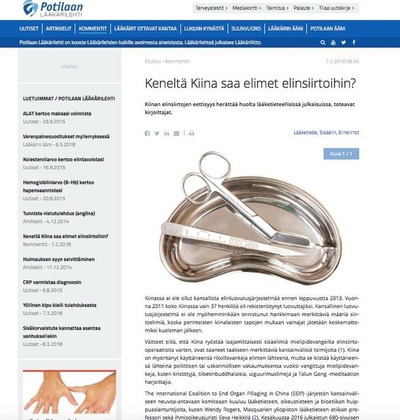 “China did not have a national organ donation system until the end of 2013. In 2011, only 37 people in China were registered as donors. The national donation system has not succeeded in acquiring significant quantities of transferring organs since, according to traditional Chinese practices, the deceased are left untouched after death,” said the article.

This raised many questions since a large number of transplants take place in China every year. Because of that, China admitted using executed prisoners as a source of organs. The number of prisoners executed is only a fraction of total transplants carried out in China, however.

Increasing evidence suggests that living prisoners of conscience, including Falun Gong practitioners, have become victims of this malpractice.

The International Coalition to End Organ Pillaging in China (EOP) was formed to address these issues. Its members include top experts in medicine, law and bioethics such as Wendy Rogers, Professor of Medical Ethics at the University of Macquarie, and Human Rights Lawyer Eeva Heikkilä.

“Following the 680-page research report published in June 2016, they have been convinced that the systematic threats by China towards the dissidents and prisoners of conscience are true,” continued the article.

Based on an article published in the Caijing magazine in 2009, between 1993 and 2007, the number of liver transplants in China increased by 400 times. “The explosive growth of liver transfers began in 2000, six months after the persecution of Falun Gong practitioners began. They are imprisoned on the basis of their religious convictions,” wrote the article.

This has drawn concern in international scientific journals. “In 2017, BMJ reported on how the Liver International magazine removed the Chinese article published in 2016, as the origins of the transplanted organs used in the study could not be determined.” In particular, the authors of the article failed to convince the delivery that the internal organs were not harvested from living prisoners of conscience as was suspected in the journal.”

According to an article published in the Journal of Medical Ethics in 2016, the ethical problems of Chinese organ transplants continue to grow. The American Journal of Transplantation published an article in 2016 stating that independent and objective evidence that China has actually put an end to such unethical practices is needed.

“The medical community has a professional obligation to academically boycott Chinese organ transplantation,” the article reiterated.

Efforts have been made around the world on this important issue. On 12 December 2013, the European Parliament published a resolution (2013/2981) (RSP) announcing its position. More specifically, “the Parliament calls on the Union and its Member States to address the issue of organ harvesting in China; recommends that the Union and its Member States condemn public organ transplants in China and inform their citizens in China of this matter; calls on the Union to carry out a comprehensive and transparent investigation into Chinese transplantation practices and considers that the perpetrators of such unethical practices must be held responsible for their actions.”

The US House of Representatives issued a similar resolution, H. Res. 343, in June 2016. Moreover, the Doctors Against Forced Organ Harvesting (DAFOH) has drafted a petition to the United Nations for the immediate end to these brutalities.

“A Youngster Overcomes Tribulations in Cultivation”