(Minghui.org) The Chinese New Year is a time for families to get together. Unfortunately Ms. Ning Tingyun's family has been in despair, because the authorities have held her against her will for over four months. 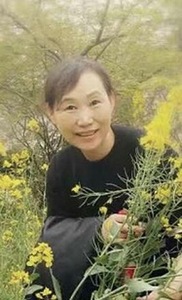 She has been held in a detention center in Yushu City for over four months. The police have sent her case to court.

Ms. Ning Tingyun is 60 years old. She was very ill when she discovered Falun Gong in 1998. Even though she was treated with Eastern and Western medicine for close to two years, nothing seemed help. She had a gallbladder problem, pancreatitis, stomach pain, chest and abdominal effusion, and generalized weakness. Her elderly mother had to take care of her. Every minute was agony.

One day she saw people doing exercises in the park. One of them came over to her and said, “This is Falun Gong. If you are interested, I can teach you.” She also gave her a tape of the Falun Gong lectures.

Ms. Ning went home and listened to the tape right away. The teachings touched her heart, gave her hope, and inspired her to live. She decided then and there to practice it.

The exercise site was only 10 minutes away, but it took her two hours to get there and, by the time she did, it was over. The third day she left earlier but was still late. The fourth day, she got there on time and finished doing all the exercises with the group. When she went on her way home, she felt so light that she walked faster and faster, passing people left and right!

She had so much energy that she gathered up all the dirty clothes in the house and began scrubbing them on her wash board that had sat idle for many months. Her family and neighbors were all dumbfounded. All her ailments disappeared, and her gratitude to Falun Gong was beyond words.

Jiang Zemin initiated the persecution of Falun Gong in July 1999. The lies and slander the government disseminated about it deceived many people. Ms. Ning wanted to tell the government, based her personal experience, that Falun Gong was good.

When Ms. Ning went to Beijing in the fall of 1999 to appeal for the right to practice Falun Gong, she was arrested and sent to Jiamusi Forced Labor Camp for one year. After she was released, her name was placed on a blacklist. She was harassed and persecuted in various ways nonstop.

In the fall of 2007, her right knee swelled up. Doctors at three hospitals examined her and said it was bone cancer. It was going to cost her a fortune to have it treated. She went home and did nothing but study the Fa and do the exercises. Once again, she recovered!

The Chinese communist government not only deprives Falun Gong practitioners of their right to freedom of belief, but also interferes with their daily lives. Practitioners' identity cards are either confiscated or marked. If they don't have an ID, they face all kinds of difficulties. If they show it, they can get arrested. When Ms. Ning's ID was checked on her way to visit her daughter, they saw she was a Falun Gong practitioner and arrested her.

The Yushuzhenyang Police Station officers did not show any ID or documentation when they arrested Ms. Ning.

To see a list of perpetrators, please see the Chinese link.

“We Must Strive Forward Vigorously”