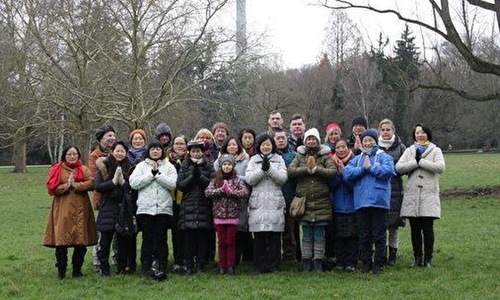 In the morning, the practitioners did the Falun Gong exercises as a group at Grüneburg Park.

Master Li traveled to Frankfurt at the end of May 1998 and gave a lecture at the first European Falun Dafa Experience Sharing Conference, which was held across from Grüneburg Park. Since then, local practitioners have maintained a group exercise site in the park. Locals who are interested in Falun Gong often go there to learn the exercises. 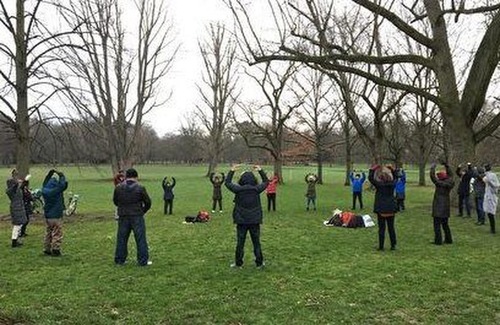 Peter Recknagel is a veteran practitioner and a manager of four multinational companies. He can speak Chinese fluently. He started practicing Falun Gong in 1997. He attended Master Li's lecture in Frankfurt in 1998.

Peter, his wife (a violin player), 11-year-old Noah, and 5-year-old Jacob. All of them practice Falun Gong.

After the Chinese Communist Party (CCP) initiated its persecution of Falun Gong in 1999, Peter and 35 other Western practitioners went to Tiananmen Square in Beijing in 2001 to protest. They unfurled a large banner with the words “Truthfulness-Compassion-Forbearance.” They were arrested 20 minutes later and were subsequently interrogated and deported. The courageous act of the 36 practitioners made headlines around the world.

Peter said Falun Gong gives him a healthy body and active view of life. He believes that Truthfulness-Compassion-Forbearance is the eternal truth and follows the principles in his work. His business partners said he is different from others; they like to do business with him and like his personality.

Peter said, “Master has given me a lot. My appreciation is beyond words. I will move forward diligently and fulfill my prehistorical vow.”

Vitali Uhl studied economic management and has worked at a large enterprise in Germany for over ten years. He started practicing Falun Gong in the beginning of 1998 and attended Master Li's lecture in Frankfurt a few months later. 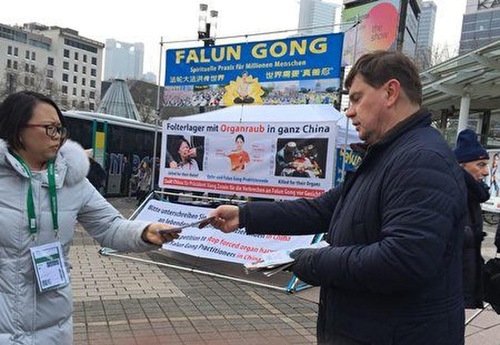 Vitali distributes Falun Gong flyers at an expo in Frankfurt in February 2018.

He and Peter went to Tiananmen Square in November 2001. He wanted to let more Chinese people know about the CCP’s persecution of Falun Gong. He often goes to tourist destinations in Frankfurt to give out information to Chinese tourists. 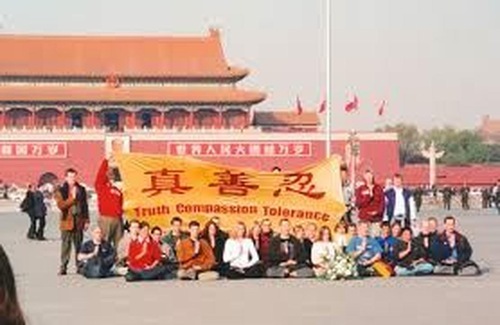 Thirty-six Falun Gong practitioners from 14 countries appeal for Falun Gong on Tiananmen Square in November 2001. Peter is the fourth from the right in the first row, and Vitali is the third from the right holding the banner.

The 20-year journey has not been smooth for Vitali. He had a tribulation of illness karma a few year ago, and his wife left him. Having taken a double blow, he read Master's teaching and said Dafa gave him the courage and strength to overcome the tribulations.

“I am fortunate to practice Falun Gong. I will continue practicing it,” said Vitali.

Practitioner Yude Cao is a Chinese German in Frankfurt. He obtained his Ph.D. in Germany and is a senior engineer in a large automobile enterprise in Germany. He started practicing Falun Gong in 1998. 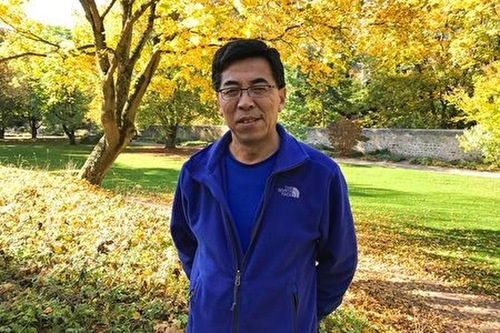 Mr. Cao said emotionally, “I have benefited a lot from practicing Falun Gong. I easily got rid of my addiction to smoking 20 years ago. My insomnia was gone. My life is filled with happiness. I can easily deal with work and life.”

Falun Gong has given Mr. Cao a completely new view of the world and a way to elevate his realm. Recalling a life-and-death tribulation two years ago, he is emotional and said Master saved him and gave him a second life.

He said, “I am full of appreciation for Master. I wish Master a happy new year!”