(Minghui.org) The mayor of Markham, Ontario, Frank Scarptiti, announced on February 13, 2018, the winning performers at the Santa Claus Parade. The Tian Guo Marching Band from Toronto won second place in the band category. 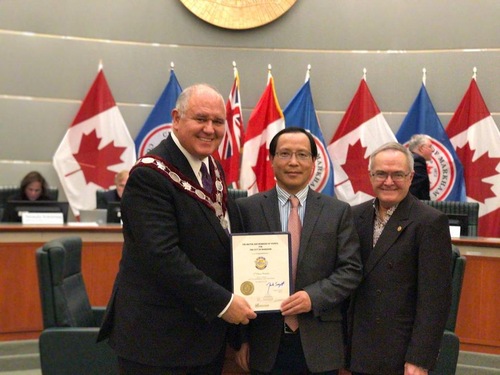 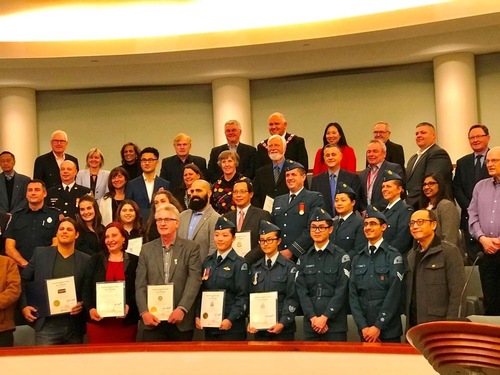 Group photo of all the winners. Jiang is the 6th from the left on the second row.

The director of the Tian Guo Marching Band, Jiang Fan, said that it was the eighth time the band had participated in Markham parades and the third time they had won an award in the Santa Claus Parade. 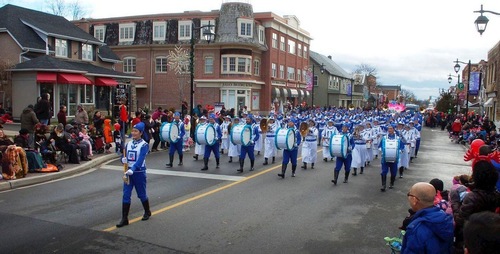 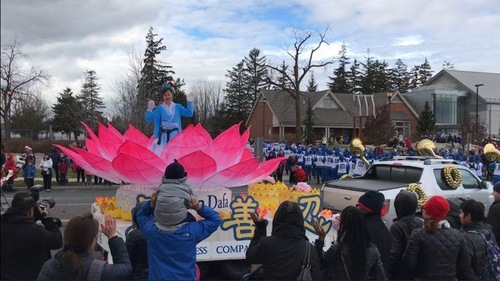 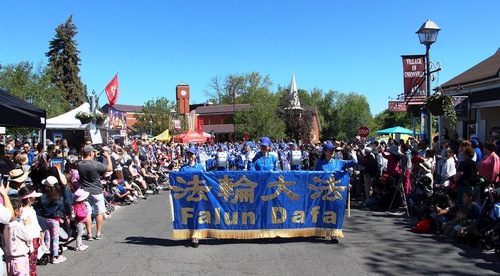 The band in the Unionville Festival parade in Markham on June 3, 2017 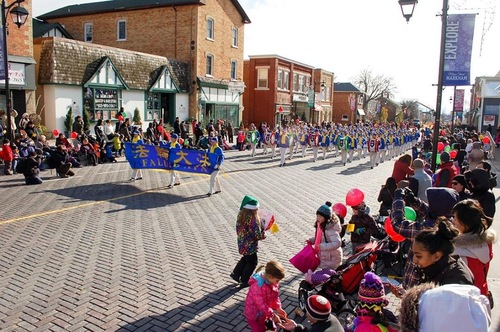 Santa Claus Parade in Markham in 2015 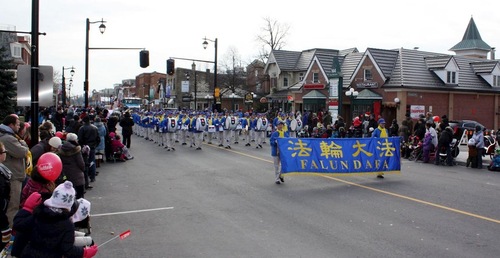 Santa Claus Parade in Markham in 2014 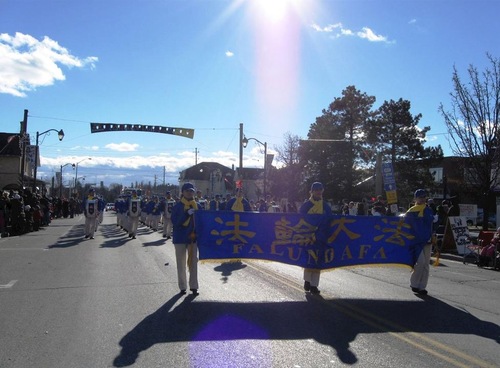 Santa Claus Parade in Markham in 2010

The Tian Guo Marching Band of Toronto consists of 180 Falun Gong practitioners and was founded in April 2006. In the past 12 years, the band participated in all kinds of community events. 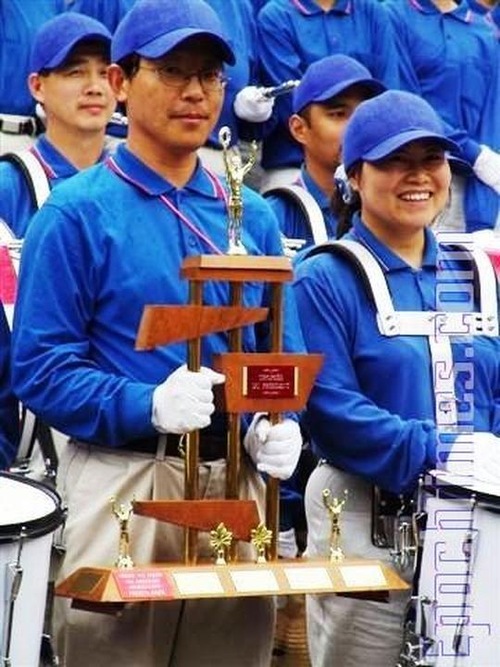 Director Jiang holds the President Award, the highest prize at the 30th Canada Day parade in Montreal in 2007. The host of the parade introduced Falun Gong and the band to the audience for 10 minutes and invited the band members to demonstrate the Falun Gong exercises on stage. 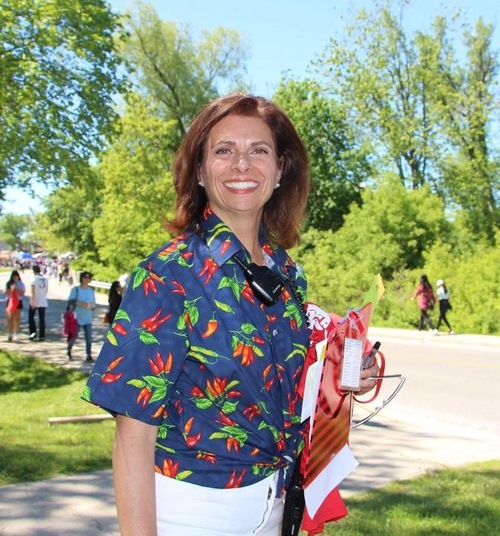 Nancy, organizer of the Unionville Festival parade in Markham, was glad to see the Tian Guo band in the parade. She said, “They bring the light to this city.” 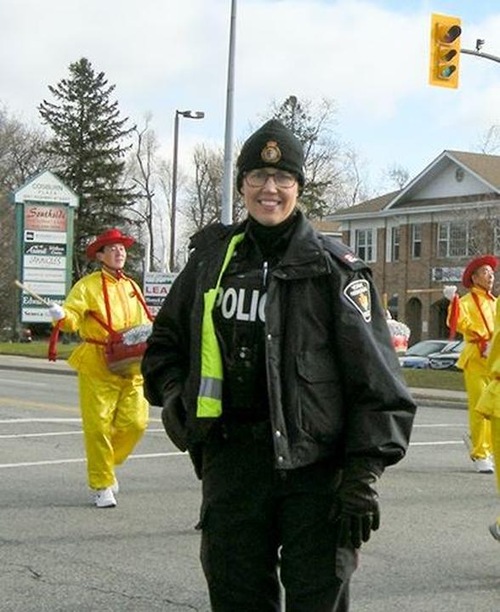 At the Santa Claus Parade in 2015, police officer Denise Cartier said the band played “excellent music” and was “beautiful.”

Many Chinese spectators were proud to see the band perform in the parades. Some of them also had a chance to learn about Falun Gong, the self-cultivation practice from their home country.

Mr. Lin, a Chinese immigrant, watched the parade in Markham in June 2017 with his family. He was excited to see the band and took a lot of videos and photos.

“It is magnificent,” he said, “you cannot see it in China.”

“We moved to Canada four years ago. I know very well what Falun Gong really is,” Ms. Lin said, “I need to make three points. First, I have sympathy for Falun Gong; second, I support Falun Gong; and third, the Communist Party should not persecute Falun Gong.”

“I was a college instructor in China. Some students of mine practice Falun Gong. I tried to protect them from being arrested. They are all good kids.”

“In Canada, we've gotten to know Falun Gong more. They are a group of good people.”

His wife echoed, “Falun Gong practitioners are great. They play such beautiful music.”

Upon leaving, Mr. Lin said Falun Gong has brought positive impact to society and added, “The persecution should end now. If everyone behaves like Falun Gong practitioners, would the Chinese society be so chaotic now?” 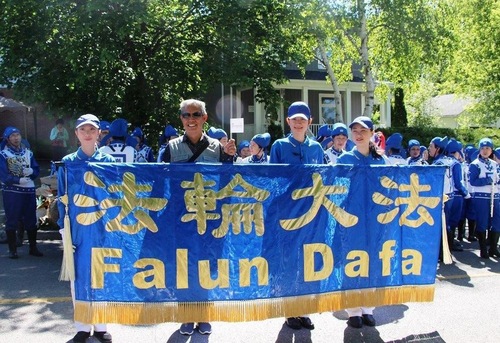 At a parade in Markham in 2017, a Chinese tourist from Beijing (second from left) was glad to see the Falun Gong band. “It’s so surprising to see Falun Gong on this trip,” he said to his friend, “I’m so happy. You have to take a picture of me with Falun Gong. It’s great that they can freely practice their belief in Canada.”