(Minghui.org) The documentary Letter From Masanjia was screened at National Taiwan University in Taipei on December 19, 2018. The film details the Chinese Communist Party's (CCP) persecution of Falun Gong. The audience was appalled and called for more people to learn about it.

The documentary begins with a handwritten letter found in a box of Halloween decorations purchased at a U.S. department store by Julie Keith, a woman in Oregon.

The letter was a plea for help written by a prisoner of conscience who was imprisoned at the notorious Masanjia Forced Labor Camp in Shenyang, China. Keith posted the letter on social media, which soon led to worldwide media exposure of the story and set off a chain reaction that led to China's “re-education through forced labor” system being abolished in 2013 – at least in name.

The author of the letter, Mr. Sun Yi, had been detained in the labor camp for his belief in Falun Gong. He risked his life to get his story out and, more recently, risked his life again during the making of this documentary to further expose the human rights crisis in China.

While being monitored by the Chinese authorities, Sun Yi took video footage of his life in China and interviewed former Masanjia detainees. Sun Yi also shared his drawings depicting the abuse he suffered and witnessed in Masanjia Labor Camp. 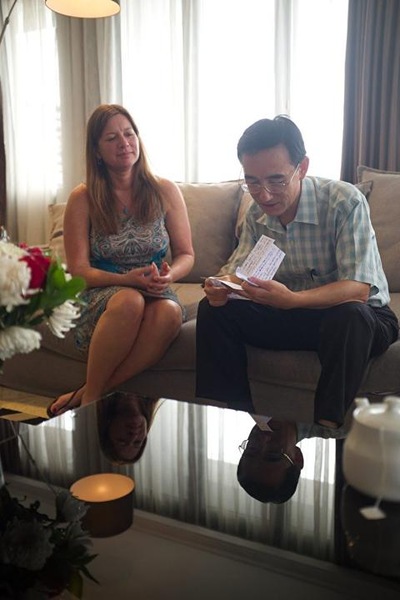 Julie Keith (left), who found the letter, met its author Sun Yi (right) after he fled to Indonesia. (photo from Letter From Masanjia)

The Falun Dafa Club at the university invited human rights lawyer Teresa Chu and others for a panel discussion. Also, Leon Lee, the film's director, participated via online video chat to answer questions from the audience.

Director Lee said, “Julie Keith bought decorations from China and found the letter asking for help. China's human rights issues, which were seemingly remote, were brought to the Western audience.”

Lee said that what she did led to the abolishment of China's labor camp system, “This is an encouragement for everyone. When we face difficulty, what should we do? If you wish to foster change, a small act could bring about a revolution.”A Taiwanese University student commented on the two labor camp guards in the movie who admitted that they participated in the persecution. Although they were misled by the CCP's propaganda and were “just following orders,” they were touched by Sun Yi's perseverance in the face of torture. One of the guards in the movie even choked up at recalling what went on. The student said she was moved to see the former guards speak up for Sun. 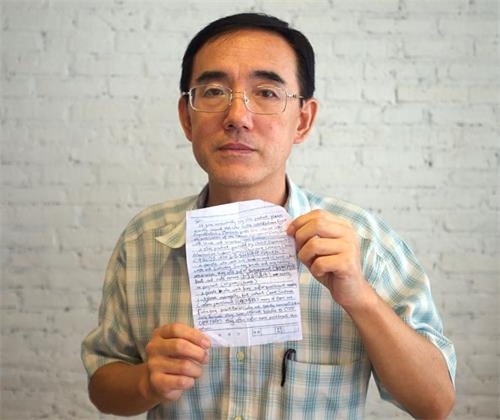 Sun Yi holds the letter he inserted into the package of Halloween decorations. (photo from Letter From Masanjia)

Mr. Gao, another student, said that he would share the film with his friends and family, because he knew that many were unaware of the CCP's persecution.

“The Party's propaganda defaming Falun Gong misleads people,” he said. “I did not have a good impression of Falun Gong before. After watching the film, I have changed my views. I am inspired.

“These people, including students and lawyers, speak out for human rights. They do not fear the persecution. I admire them.”

Ms. Jian said that Sun Yi was to be admired for not giving in to the persecution. He persevered in his belief. When he found his letter for help posted online after he was released from the labor camp, he wanted to be involved in making the film to help more people learn about the persecution.

“I think he was selfless,” Ms. Jian said, “and wanted to help others by sacrificing his own self-interest.”

She said she did not know that such brutal things were happening in today's world before she saw the film. She said, “I want to help these people. With what I have learned, and given my connections, I should help to change that.”

Ms. Lee, a Taiwan University alumna, thought that the film was touching and said, “I could not have imagined that such things could be taking place in a civilized society. I regret that there is no media report or film on this issue. It is inconceivable. The media in Taiwan should report on this.”

“Retiree Tried for Putting Up a “Falun Dafa Is Good” Sticker”