(Minghui.org) “Ask your husband not to go overseas. If he goes this time, you may not see him again,” said Huang Shikun's doctor to his patient's wife. As a general manager of an international textile company in Taiwan, Huang planned to go to other countries to oversee the launch of two new factories. This was in 2002 and he was 53.

He was in poor health and on a downslide, while his career was on the rise. Thirty-six years of chronic skin allergies, and stomach problems, had driven his health situation to an all-time low. His doctor said that even with an immediate retirement he would only be able to recover up to 70% of his health.

Huang had just established a new factory in Mexico. He oversaw negotiations, signing the contracts, planning of the factory, tax, accounting, and labor law compliance, recruiting, customs, distribution, settlement of expats and their families, and so on.

Two more new factories were to be installed in Nicaragua in 2002, and in Lesotho, Africa in 2004. The complexities involved would require him to be on-site. Considering his responsibilities in regards the company's development and the well being of employees, he decided to make the trip despite the health risk.

He thought maybe qigong could help him recover his health. His Chinese medicine doctor, however, advised him not to, saying, “Qigong supplements your meridians (energy channels in the body). But your body is too weak for such a regimen.”

Huang wondered, “Is there a way out for me? Or do I need to accept my impending death at the age of 53?”

As Huang was leaving Taiwan, he met Mr. Lin, his neighbor. He learned that Mr. Lin practices Falun Gong. Huang had tried Falun Gong back in 2001out of curiosity, upon learning the news of the persecution in China. He thought that a practice the Chinese Communist Party (CCP) persecutes must be good. However, he didn't notice much difference in his physical health at the time and stopped doing the exercises.

Cultivation and Exercises are the Key

Huang realized that he had only done exercises and didn't really follow the spiritual principles. He picked up the main Falun Gong book Zhuan Falun.

“Why haven't I come across this book until now?” he thought. “I lived the first half of my life in unawareness. This book talks about the most important issues in life!” Huang thought to himself, as he read Zhuan Falun. He finished the book within two days.

In Nicaragua, no matter how busy he was, he did the Falun Gong exercises every morning and studied the Fa every evening. After just three months, he noticed a big change in his health. His stomach pain disappeared. Age spots on his face disappeared. Most importantly, he was finally free of all his chronic problems. 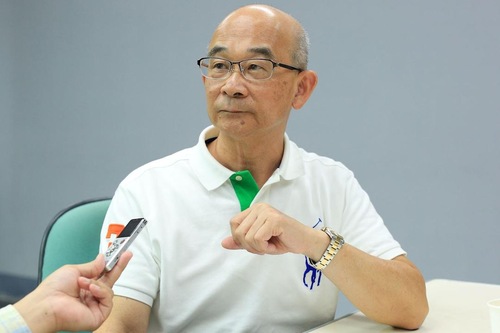 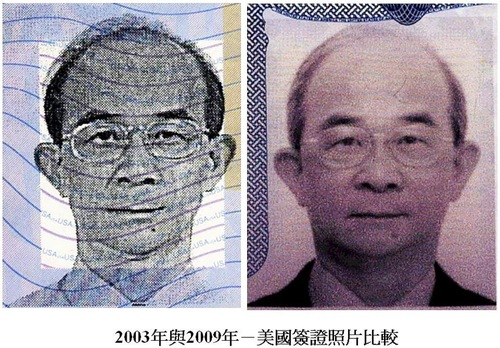 Huang obtained dental implants at the age of 64. As his six-month treatment ended, his dentist said to him, “I haven't seen such a healthy person at your age. Given my experience, your treatment should have taken one to two years. You have shown very strong healing power. Your dental neural tube is of a diameter comparable to a thirty-year-old!”

“Falun Gong saved me!” said Huang. “I have found the meaning of life and a clear purpose in my heart.”

He returned from his trip to Nicaragua. He is now teaching business management at Feng Chia University and established a company upon retiring from the textile company. 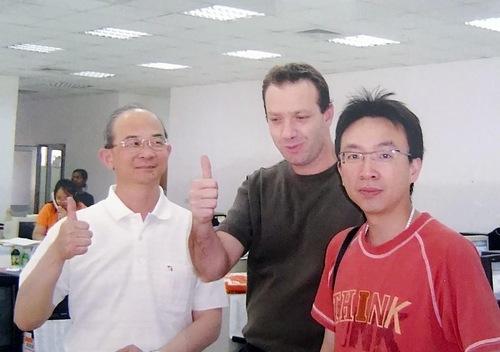 Huang's picture with a customer in Lesotho, Africa in 2004 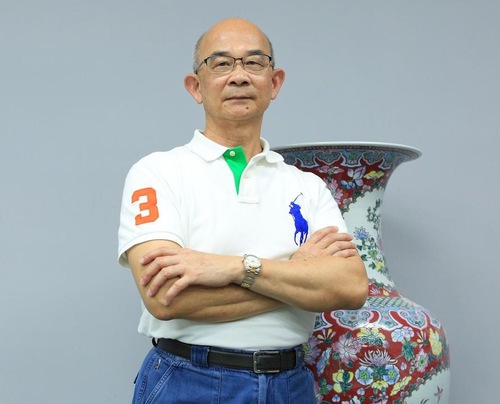 Huang Shikun teaches at Feng Chia University and established a company upon retirement from the textile company.