(Minghui.org) Ms. Yang Zhiqiao, a Taiwanese Falun Dafa practitioner who had poor vision from amblyopia since her childhood, recounts her experience of how Falun Dafa restored her health.

Blue sky and white clouds are part of childhood memories for most of us. However, the world in little Zhiqiao's eyes was gray and blurry.

Shiqiao said, “When my elementary school teacher showed us how to distinguish five-dollar and ten-dollar bills. I couldn't tell the difference at all, and I couldn't get the ball while bouncing it. That was when my parents found out that I had weak eyesight. When I started my vision-correction treatment, my optometrist accidentally mixed up the lenses for my left and right eyes. For six months, I felt terribly dizzy whenever I put on my glasses. I cried and cried. They didn't find the mistake until I was given my second eye exam.”

She continued, “It's probably the reason that I always felt insecure. My ranking was at the bottom of my class. I didn't have any courage to stand in front of my class, tell my friends my thoughts, or do homework with my classmates because I didn't know the answer to any of the questions. The mother of the top student in our class once told me, 'If my son were as stupid as you, I would have killed him!'”

Even though Zhiqiao was young, the words left a deep impression and were unforgettable. She said, “I have always tried to do well and tried to behave like a kid who can see well, but it didn't work no matter how much I tried.”

Her fear and stress built up and caused her tremendous suffering. “Whenever my menstrual period started in middle school, it was so painful that I had to stay in bed during those days. There was not a single day when I did not have a headache. I often woke up with a terrible headache.”

Zhiqiao will never forget the first day of her national college entrance exam. As soon as she woke up, she was hit by a severe headache. “I couldn't think at all. It was hard to move! I thought I was done. Why is life so painful? My mom didn't want me to take the exam, but I refused to give up. I wiped away my tears and made up my mind to finish my exam so I could go to college.”

Despite her poor health, Zhiqiao started college in 2008. She asked herself if her condition would accompany her for the rest of her life. She said, “I didn't need much. All I wished for was a normal life!”

“My mother used to have a uterus tumor. For three years, she had so pain that she couldn't stand up straight. Her doctor didn't think surgery would be the best option. She started practicing Falun Dafa. Within half a year, her condition improved. She no longer had to see a doctor. It made me decide to practice Falun Dafa as well.”

Zhiqiao started to do the Falun Dafa exercises and read the book Zhuan Falun after school each day. After three months, she had recovered from her illnesses.

She said, “I used to have a bad headache that even the bumps when riding a bus would cause terrible pain. Now, riding a bus to college is fun because I finally feel like a normal person!”

Planting the Seed of Truthfulness-Compassion-Forbearance

After Zhiqiao started practicing cultivation in Falun Dafa, she was finally freed from her eighteen years of suffering.

“I could finally concentrate while studying,” she said. “I was able to transfer to National Taichung University in my second year. Everyone was surprised because they knew I wasn't a good student. My former classmates even thought it was a joke that someone at the bottom of their class would become a teacher!”

The journey to become a teacher wasn't completely smooth, but after Zhiqiao let go her attachments based on the principles of Falun Dafa, she passed the exam and became a teacher. 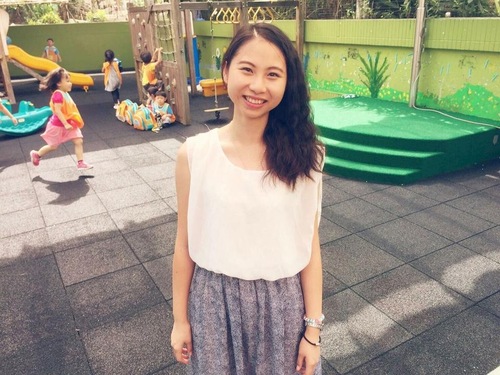 Zhiqiao becomes a teacher after recovering from her lifelong conditions.

Learning to Consider Others First

Zhiqiao said, “Many issues affected me after I became an elementary school teacher. Some parents had unreasonable requests. For example, a parent brought fruits and asked me to make fruit juice for her son because he wouldn't eat fruits directly. Some parents claimed their kids had brought something to school that had gone lost. Some parents asked me to record everything their kids did in school, including how much time they spent in the bathroom. How could anyone do all that where there were only two teachers for 30 students?”

She continued, “During my first year, I wanted to argue with these parents and convince them with my reasons. Deep in my mind, I didn't want to see parents tell me what to do. With such thoughts in mind, my conversations often showed my mentality of fighting and showing off. However, I later remembered what Master (Li Hongzhi, the founder of Falun Dafa) had taught us:”

“If you can always be compassionate and calm, you will handle the issues that arise in your life well since you will have a buffer, in a sense. Things will work out well if you are always compassionate and good to others, thoughtful towards people, and handle whatever situations you get into with people by first pausing to consider how well your actions will go over with the other party and whether anyone will be hurt by them. You should hold yourself to high standards and raise the bar still further as you practice.” (The Fourth Talk from Zhuan Falun, 2018 Translation)

“Master's teaching reminded me to look within,” she said. “I asked myself why I hadn't thought about why the parents reacted the way they did. Children are most precious to their parents. I should correct my mentality. Ever since then, I always let parents finish talking about their requests no matter what kinds of requests they are. I would show my understanding and patiently answer their questions. I became their friend.”

Zhiqiao is filled with gratitude since she recovered from her illnesses after she started to cultivate. She said, “It's Falun Dafa that has given me peace and made me a considerate person. I thank Dafa for giving me a new life, a truly happy and healthy life!”

“The CCP Is Building a Police State Without Fear of Consequences”