(Minghui.org) Today's news from China includes incidents of persecution that took place in 16 cities or counties in 10 provinces. According to this report, 8 Falun Gong practitioners were subjected to mistreatment during their detention, and at least 36 were illegally arrested. 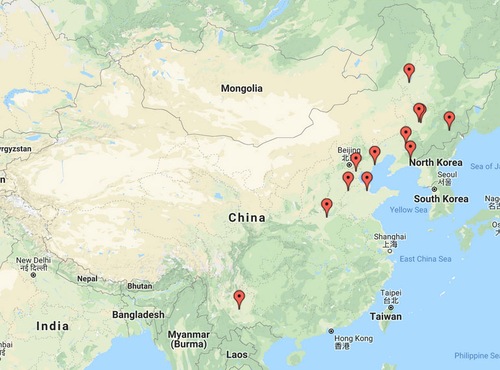 Ms. Wu Yanan was arrested by officers from the Shenzhen Street Police Station in the Changchun Economic Development Zone on October 12, 2018.

Ms. Wang Xiuying was arrested by officers from the Pudonglu Police Station in the Changchun Economic Development Zone on the same day.

Both practitioners are being held in the Changchun City No. 4 Detention Center.

Ms. Shan Qinshu from the Sujiatun District was arrested at home by Song Zhenghe, a deputy head of the Sujiatun Domestic Security Division, and officers from the Huxi Police Station on the morning of December 8, 2018. Her Falun Dafa books were confiscated.

Mr. Li Peigao was arrested by officers from the Jinbilu Police Station on the afternoon of November 24, 2018, when distributing Falun Gong calendars on Xunjin Street. He was released later that evening.

Ms. He Rongzhen, Ms. Wang Guilan, and Ms. Guan Xiaoxia from Liujiahe Town were arrested by officers from the Tongyuanpu Town Police Station on December 7, 2018 when distributing Falun Gong calendars in Linjiatai Village, Tongyuanpu. They are being held in Dandong City.

Ms. Yang Hong was arrested by officers from the Dongwu Police Station in the Jianhua District on November 4, 2018.

Five practitioners were tried by the Chaoyang District Court on November 30, 2018.

The five practitioners have since appealed.

Ms. Liu Shuxiang, in her 80s, from the Nankai District, was arrested on February 1, 2017. She was sentenced to four years in prison, and is being held in the No. 2 Ward of Liyuantou Women's Prison.

Ms. Liu has lost sight in her left eye, and the vision in her right eye has deteriorated due to being mistreated in prison. She suffers from myocardial ischemia, her face is swollen, and she is physically weak.

Ms. Liu Jingxia was transferred from a lockup center to the Zhengzhou City No. 3 Detention Center by officers from the Wenhualu Security Squadron on November 30, 2018.

Thirty six practitioners from Qingyun County were arrested on November 18, 2018. As of December 7, Ms. Zhao Junxiang, Ms. Duan Guixia, Mr. Du Quancun, Mr. Jun Gang, Ms. Yu Binglan, and Ms. Wang Shuzhen are still being held in the Dezhou City Detention Center. The rest of the practitioners have been released.

Mr. Xu Xuezhi from Jiaping Village was arrested by officers from the Dunhua City Patrol Police Division on July 4, 2018, when mailing Falun Gong informational materials in the Dunhua Post Office. His whereabouts are unknown.

Ms. Wang Haiyan was recently sentenced to a four-year-and-three-month prison term. Ms. Wang and her family have since appealed.

Ms. Tian Yanhua was sentenced to a two-year prison term, and taken to the Shanxi Women's Prison on December 1, 2018. Her husband was not informed of her imprisonment.

Ms. Zhang Jiying, 63, from Hengren County in Liaoning Province, was arrested in the early morning of August 28, 2018. Four police officers broke into her home while she and her grandchild were asleep, and ransacked the place.

When Ms. Zhang's husband, Mr. Wang Jiawei, went to the police station to inquire about her case, the police interrogated him and forced him to sign the interrogation documents, which were later used as evidence against Ms. Zhang.

Ms. Zhang is being held in the Benxi City Detention Center. Her arrest has been approved and her case has been submitted to the Procuratorate.

Ms. Zou Shuangfen was arrested on October 17, 2018, and taken to the No. 1 Detention Center in Erzhigou, Wujiashan for 15 days. Her family went to pick her up when her detention expired on the morning of October 31. However, the guard said that she would be released the following day.

Ms. Zou’s family returned to collect her before 8:00 a.m. on November1, and were told to wait until the release procedure was completed. After they waited for a long time, they learned that Ms. Zou had been taken out through another entrance by the 610 Office.

Ms. Zou’s family does not know where she is being held.

Ms. Yu Ping, 55, was arrested on October 21, 2018, and taken to the Guangzhou Legal Education System School (A brainwashing center). Her family did not receive notification from the “school” and were not allowed to take her any clothes.

Ms. Yu’s family has filed complaints against the brainwashing center to the relevant legal departments in Guangdong Province.

Ms. Lu Xiuli, about 70 years old, has been missing for more than a month. It is believed that she was taken to the Putuo District Mental Illnesses Prevention Hospital for persecution by personnel from the 610 Office.

“Amazing Things Happen When My Heart is on the Fa”